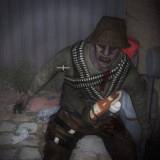 To start off my first blog ever, I'd like to state that without a guy known on the forums as "Vincenotvance" making his own, cool and brutally honest blogs, I would never have been inspired to start this blog thing up. Not anytime soon that is anyway.

Ass kissing out of the way, I'd like to make my first blog as light-hearted a meandor through my gaming thoughts as possible with no real commitments into the blog.

Any disagreements you may have with my views are fine, and I'd love to hear how you came to be confused, annoyed or anything else from that good emotion stuff that rises from your gut. Just don't confuse that request with puking up written diorhea stains on the comments section please. lol.
And don't get soppy with me please! I'm straight, always will be, lol. ;-p

So to get started.  I'm going to do something on a regular basis, if it proves successful. I'll be calling the "Why this way?" blog.

1. Why do games vendors like 'GAME'(UK) and 'GameStop'(US) have to make a big kafuffle over pre-orders?
Offering almost completely insignificant little extras and, in steams case, taking off a small chunk of the price to attract more pre-ordering activities from other people. In the end they end up getting the same amount of money on the same day and they don't seem to gain all that much press from the number of people who have done so.

2. In conjunction to the above "why this way?" point.
Demos that are only given to people who pre-order.
This one really bumps me. WHY do they do this? It defeats the object of the demo dosn't it?
Dictionary description of the word Demo: (Courtesy of Encarta.msn.com.)
"Demonstration of product:  A demonstration, especially of a new product ( informal )."
Do games stores not get this concept or have they simply forgotten the English language and started making their own dictionary?

3. Why does Modern Warfare 2 have to make sense?
I'm not a fan boy of any game in particular, I believe that a game should get it's merits based on the quality of it's content, and I'm only a fanboy of quality of content. But people all over the internet commented that the story was nonesense and that whilst it didn't wholly destroy the single-player experience for them, it did dampen it quite a bit.
WHY?
I'm a gamer that just loves to play a game and find as much satisfaction in the gameplay and epic scales as I can.
Modern warfare 2 was throwing bucket loads at people, and people were flecking spoonfull''s off the top of the pile and throwing those spoonfuls back into the buckets. Simply because they could see gaps in the story that made no real sense what so ever. Just enjoy the experience.

4. Why do people complain after they die in multi-players? (I used to be a total hypocrite about this. I trained myself to just say: "Oh well", and it really works.)
Too many times I've found myself telling some one to "calm down" after they start growling and grumbling about it, only to find my speaker ear being bombarded with insults I neither deserve nor desire.
My respone: "You sir, are muted. Goobye! Mwahahahaaaa."

5. Why do some gamers get territorial when a female gamer is in a game lobby? Trying to show off and be cool in front of her.
I find it hilarious when this happens. But I don't get it either...
Will this person ever meet the girl in real life with any real likelyhood? Hell no!
I mean it's a truly beautiful idea that we could meet our "soul-mate" on Xbox Live. But very silly and kind of sad that a person could ever think that somebody they've never over Xbox Live met could be the love of their life.  It's almost too creepy. And it is definitely creepy for any women out there who has to deal with this stuff on a daily basis.
For those of the female gamer population that have to put up with this stuff. I apologise, and as a joke contradiction of myself, would ask you for your number except I don't know you and don't want to until you've shown me that you live nearby and aren't some kind of nut job. :-p

I'll leave it at that for this blog.Any helpful comments about how I could improve in format and writing style would be welcome. No insults please, just observations and good opinions please.

Blogs Created:
2 blogs
Most Commented blog:
So I finally gave in... But it's ok.
Total Comments on blogs:
27 comments