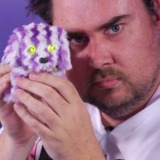 The Problems With "Heavy Rain" *SPOILERS*

Just finished reading a write-up by Kirk Hamilton on Gamer Melodico about his numerous issues with Heavy Rain. It's a good read that summarized my issues with the game. You can find the read here, and I suggest anyone who's played the game look it over:

Heavy Rain: Sound and Fury, Signifying Nothing
Here is my response:

I never seemed to have as much of a problem with the QTE, so I was fairly enjoying the game for the most part. I realized the story was average and cliche-ridden at best, but was still intrigued about how it would end up and what I would have to do.

That was, until I reached the point that they implied that the killer was going to be a surprise. I took a moment to think about what this implied; namely, that it was someone the player already knew. There was no character in the game that I was going to happy with being revealed as the killer. And yep, it was Scott Shelby, and I felt fairly enraged.

It's possible that going back through his story, everything he does (and everything he thinks) somehow lines up with his true motives, though I still think the scene where he kills the typewriter expert is cheap...he is apparently shocked to find him dead even when he's not trying to put on a show for that terribly-voiced hooker mom.

It's the idea of motive that is the real problem with Scott Shelby being the killer. In a game such as this, making the claims that it does, being told to experience and play out a character under a suggested motive that is false is cheap. It helped make an average story terrible.
24 Comments