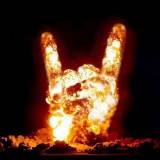 Hey everyone! Since its Friday the 13, I thought it would be fitting to have this week’s album honor one of the greatest shock rockers of all time, Alice Cooper. I’ve read the feedback and I will continue to write full length reviews. Thanks everybody for reading!

Welcome to My Nightmare - Alice Cooper

Welcome to My Nightmare is the debut for Alice Cooper as a solo artist (since he has adopted the band’s name as his own). This concept album tells the story of a young boy named Steven who is having a series of nightmares that he cannot seem to wake up from. The album begins with the eerie title track that serves as a great introduction for what’s to come. Next is the heavy rocker Devils Food that ends with a monologue by none other than horror legend Vincent Price. This leads into The Black Widow, complete with creepy choruses and slick guitar soloing. Some Folks is in the style of a show tune while still being a rock classic. Alice Cooper shows his sensitive side with Only Woman Bleed, telling the story of a woman who is abused by her husband. This song is among many of the great rock ballads and puts his heart and soul into his performance. Department of Youth continues in ’s ability to inspire rebellion through rock anthems (and includes a very funny line at the end). Cold Ethyl is another hard rock classic that tells about the life of prostitute……….yeah that’s about it.

At this point, the album focuses back to the main story revolving around Steven. The musical styling of Years Ago does a great job of creating a creepy atmosphere that can chill the bones. This trend of atmospheric build up continues with Steven, a truly disturbing epic which serves as the climax to the story. is able to become the character through his singing and tone. Steven finally wakes up (The Awakening) and major plot twist is revealed. The album finally closes with uplifting (music wise) track Escape which is a fitting end to a masterpiece in both concept and music.

If there was an album that had the ability to truly freak me the shit out, this was the one. is the father of horror in rock n’ roll and is one of the most important figures in rock history. This is a record that needs to be experienced personally and is among the greatest rock albums ever conceived.

Welcome to My Nightmare

Hey all! This week's album is a little early because I'm going away this weekend. I've decided that I'm gonna ditch the whole writing an entire review of an album for now in favor of simply telling you what album you should check out this week. I'll also share which songs I feel are the best off them. If any of you think that I should continue writing full length reviews, let me know.  I'm actually glad that several people actually took the time to read through the crap I had to say and I hope they enjoy this weeks edition.

The Formation of Damnation- Testament

Standout Tracks:
For the Glory of... + More Than Meets the Eyes
Dangers of the Faithless
The Persecuted Won't Forget
Henchmen Ride

Album Review of the Week #01

Hey everyone and welcome to my first Album Review of the Week! The main purpose of this is for me to share my opinions on my favorite albums and to try and expose people to bands they may not have known about. Since you probably already know that I enjoy the metal music, most of my reviews will be metal albums although I will throw in some straight up rock albums here and there. For now, I’ll concentrate on releases from the past few years while also including some classics. I’ll definitely be doing some recent releases when they become available. This is somewhat experimental and I would love feedback from you guys on how I can make these reviews better. Also, I’ll probably be updating these on Fridays or Saturdays.


A friend of mine played me Firewind and as soon as I heard them I knew that I had to check them out. These guys are one of several power metal bands from Europe (in this case, Greece ) that take elements from classic ‘80s metal and give them a modern feel. This album begins with the ball-punching title track and continues the adrenaline surge with “Insanity”. Things become simplified with the catchyness of “Falling to Piece” which is followed with my personal favorite on the album, “Ready to Strike”. “Breaking the Silence” is another catchy yet heavy song (despite its corniness) and features the pop singer Tara (don’t ask me who she is cause I have no clue). At this point, the album has reached its peek and continues to be great without the impact the first few songs had. “Till the End of Time” is the last song to really stand out in my opinion with fast driven verses and its heavy chorus. The rest of the tracks on the album are definitely listenable and don’t detract from the overall quality of the package as a whole.

Some of the factors that make this group stand out from other metal bands are the memorable choruses in both the guitar work and lyrics. Singer Apollo Papathanasio does an amazing job in selling the songs with the power of his voice as well of the vocal melody he provides. Guitarist Gus G. (previously of Dream Evil) brings his signature guitar work to his solos that make him instantly recognizable. Overall, Allegiance is a prime example of what the combination of classic and modern metal can produce when done right. Anyone who likes power metal or metal in general needs to check this one out.

Till the End of Time

* Also check out “The Fire and the Fury” from the Burning Earth album as well as their cover of “Maniac” on The Premonition.

The next few weeks are gonna rock!

It's mindboggling how many great new peices of downloadble content are coming out in the next couple of weeks as well as games. First off, on Monday there's going to be a RE5 demo which will be awesome. Next, on Tuesday Operation Anchorage is out. This is almost a Godsend for me because I won't have school that day. I have block-scheduling at my school and I don't have any finals that day so I'm going to try and beat the entire quest that day. The next week, a Halo Wars demo is dropping which I'm also looking foward too. It's great that these demos are being released weeks before the actual games in order to hold us over for a little while. Two weeks later, the Lost and Damned is out and I'm excited to finally return to GTA IV. I'm not really interested in Street Fighter IV but if other people are that's cool. The close out the month of February, Killzone 2 will hopefully justify my purchase of a PS3. Of course, Halo Wars and RE5 are coming out March and should be able to keep me busy for the first half of the year in addition to everything else I just mentioned. I just hope that the rest of the year will be this action packed with content. So what are you guys looking foward to in the next few weeks or even first half of the year?

Also, I picked up Dead Space and Prince of Persia last week and I still need to play them. Should'nt take me too long to beat before all of these goodies come out.

What should I get for my birthday?

My birthday is in 2 days and my parents keep asking me what I want. I can't think of anything so if anyone has any suggestions it would be much appreciated. I already ordered Dead Space and Prince of Persia a week ago so I think I'm good on the video game front for now (although it has been proven that you can NEVER have enough games).

Blogs Created:
6 blogs
Most Commented blog:
What should I get for my birthday?
Total Comments on blogs:
29 comments