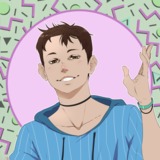 I play/watch video games and question the reason for existence at every turn.

A Series of Words About Giant Bomb

It's hard to express what Giant Bomb is with any series of words. It's a website about video games. It's just a group of guys (and sometimes girls) playing video games. It's a place where discussions can be had, in length, about the merits of wielding a bat against a knife, and vice versa. It's lockdown (the song, not the quarantine). It's that place where those guys played all of Persona 4, and all of the Metal Gears, and trudged through 11 Mario Parties. It's a constellation made up of distant stars with their own unique glow, each one shining radiantly in a night sky and providing some small semblance of guiding light.

When I was dealing with anxiety and related sickness in my first week of college, Giant Bomb was a comforting shoulder I could lean on and rest my eyes. Of course, many other websites and influencers are these things as well, but Giant Bomb has always felt like it MEANT something more than just that. It was a place that encouraged people to be true to themselves and to dare to be how they want, no matter how crazy, or non-conventional, or irrational that may be. But it was also built on the hard work of determined people who dreamed to create something of their own, and who managed to put on a happy face in the darkest of times.

There are a lot of things I feel I owe to Giant Bomb that will never be repaid by subscription dues or merchandise purchases. A sense of self, a desire to pursue authenticity, and a reminder of what makes life worth living. Today is an end, not a definitive one, but one worthy of celebration, so let's give thanks to what we have had.

Thank you Jeff, for your unrelenting ambition and curiosity, and your unending pursuits in both showmanship and games. You are an army of influence that stirs inspiration in everyone around you, and manages to entertain them all along the way.

Thank you Ryan, for the warmth and kindness you shone down on Giant Bomb with your big happy smile and that feeling that if anything was wrong, you were a guy who would be willing to sit and talk about it.

Thank you Brad, who joined the Mile High Club and always found a blend of intelligent discussion with a willingness to laugh at himself or go with a joke.

Thank you Vinny, the nicest soul who could trip a million times and still pick himself up with a smile, capable of wielding infinite patience and joyfulness.

Thank you Alex, an inquisitive mind who managed to neutralize some of the chaos while bringing about his own percussive zaniness.

Thank you Drew, a charming man seemingly capable of anything he set his mind to, and one who inspires those around him to be their absolute bad.

Thank you Dan, the chaotic good of Giant Bomb who always sought to throw wrenches into any plan, but only with the best intention.

Thank you Abby, a voice that dared to be different amongst the bunch, offering alternate viewpoints and attitudes and never apologizing for it.

Thank you Austin, a true intellectual who can pick apart any narrative to examine every gear in its clockwork and understand what it's meant to turn.

Thank you Patrick, the scoop expert who brought an eye for smaller games and sought to highlight the best in the industry.

Thank you Ben, someone who reminded us that it's okay to feel and even be awkward at points, but never letting it prevent him from being himself or even cracking wise.

Thank you Jason, a voice of rationality and chaos amongst the insanity, and endured too many years of working with Dan.

Thank you Jan, for bringing your unique blend of culture to Giant Bomb and working to create an inclusive and welcoming community. I hope your Pokémon card problem is short-lived.

Thank you to the rotating chair of countless stars who crossed through the horizon. To Danny and Don Bradman Cricket, to John Vignocchi, Dave Lang, Adam Boyes, and the ruined phone number, to Phil Spencer and his insightful E3 discussions, to Jeff Bakalar and his rotating chair, to Marry Kish and her Downwell victory, to Will Smith's disintegrating VR avatar, and infinite others that can't be recounted.

Everyone who ever graced Giant Bomb, I thank you for helping make it what it was. It was everything.