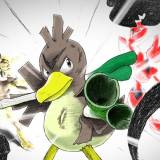 A good deal of fun, with great music to go along with it.  Too bad there is almost 0 chance of a remake without the Disney games license.

No Wile E. Coyote yet?

Sonic for many reasons, one of which is human-kissing related.  They should bring back two player split screen races like in Sonic 2 and 3.  That wouldn't bring it back, but it would be awesome.

Variety is the Cinnamon of Cheese

Points gotten for editing things about:

Giant Bomb is the best.