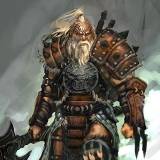 I also pre-ordered L.A. Noire. I like the detective angle and it looks like Rockstar has some novel ideas on implementing that concept into a video game. Between this and The Witcher 2 it's going to be a busy May.

I'm going to upgrade my graphics card to a MSI 570 GTX P/E in preparation for The Witcher 2, Battlefield 3, and Skyrim. If needed, I'll do SLI in the fall and add another at that time. But, we'll see if it's needed.

My six year old made it all the way to Dr. Wiley's castle in Mega Man 9. He was so excited. It's a pretty hard game. Good going!

I bought Torchlight during a Steam sale and have enjoyed it. I lost some interest in it, but after discovering mods, I've started playing it again. Much more fun now. lol

I hadn't played Dragon Age in almost a year, so I figured I'd finish it. Hit the level cap and decided to buy the Awakening DLC; unfortunately, it doesn't increase your cap in the main game. D'OH! Oh well, it gives me more to play while I wait for the super, mega, bloated edition of Dragon Age 2 to come out later this year or next.

I've decided, for my RPG fix, I will wait for the "complete" edition to come out for any RPG so I can snag all the DLC and filler packs for one low price. Cheap gaming. Love it!

I picked this up from Steam when it was on sale for $7.50. Money well spent. lol

Playing Killzone 3 and enjoying it so far.

Speaking of timeless classic, the Mega Man games fit the bill.  My five year old loves Mega Man.  He knows all the characters and has played 3, 9, and 10.  He is pretty close to getting past all the bad guys from 9 and making it to Dr. Wily.  He keeps asking for more, but I told him he has to complete one of the three he has before he gets a new one.  He'll be excited to see Mega Man Universe when it comes out.