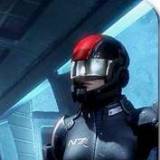 
Here is my review and some spoilers (OK lots of SPOLIERS DON’T READ ANY FURTHER IF YOU DON’T WANT TO KNOW) for the new DLC for Mass Effect 2 ‘Overlord’.

Well, Bioware gave us what they promised. The biggest DLC for the game yet. I finished in just under 2 hours. It is another chapter in the life that is Commander Shepard fighting for what is right. (if your a paragon that is) The premise is that a Cerberus scientist is working with Geth tech and has used his brother (who is autistic by the way) as a way to try and control them. It goes horribly out of control and the universe is yet again under threat of being taken over and everything being destroyed. The only huge problem I had was trying to figure out where to download it from. That would be the dashboard where you can explore new DLC for games.

The only part of the game play that I didn’t like, yet again, is having to drive the Hammerhead. I have to say that

it was not as frustrating as the ‘Firewalker’ missions which really were 90% driving around and wishing you weren’t. There is a lot of jumping through rivers of lava from platform to platform. Move fast because when you land they disintegrate from under you. Easy enough. And watch out for the wildlife. You can actually run over them and make ‘em cry. When you get to the giant force field covered turret make sure that when it targets you that you are next to the generators and then MOVE fast. It will take out the shields for you and make this area a lot easier to deal with. It will target you if you are not moving so hang out a bit until the red grid appears and then hit the gas. Makes a long fight a lot shorter. And a lot less frustrating.

The cinematics were phenomenally done yet again and your AI on the Hammerhead is even polite enough to point out the views to you. So enjoy! Not a place that I would want to picnic but it is a place that I want to save. No new weapons or squad members but lots of gun-play and a couple of puzzles to figure out. Don’t forget to explore everywhere before you get out of your vehicle because you will not be able to go back and do it later! I learned this the hard way.

ether your squad make sure you have a heavy hitter like Grunt, Garrus or Zaeed and a good overload specialist like Miranda.  Because the AI can take over and control the Geth you are fighting machines, so take note and the right right person to deal with them. Reave will not help you here. Weapons choices don’t really matter until the final fight. (which on hardcore made me want to tear my eyes out and throw the controller across the room…which I might have done) Most of the fights are typical duck and cover fighting and not to bad to get through. Until you reach the end. Here’s all I will say about it. Do not try to kill everything that pops out at you. Run and gun at your primary targets and try to avoid getting hit. HA! I learned that the hard way too. A lot. In the end of course you have the choice to play renegade or paragon with the life that stands before you. Because there are no interrupts in this I always think it is a good idea to get the DLC out of the way at the beginning of the ME playthrough only because it will up your paragon or renegade score and help with dialog choices later on in gameplay. Say when you are on Loyalty missions.

The last 15 min of glameplay is reminiscent of the Matrix but it doesn’t matter. It makes for a different and quite entertaining time. The environment turns into lines of running code making things a bit hard to see so make sure you look at everything as you go. It’s easy to miss thermal clips and important information. When the geth are killed they explode into code and upload themselves up into the ceiling. Actually pretty sweet. Makes it easier to tell when they are down.

All in all this was the fun entertaining story driven play that we have come to expect from the Mass Effect games and the creators from Bioware. Excellent DLC and totally worth the MS points. Maybe they didn’t give us anything for Mass Effect 3 at E3 this year but they did give us something to enjoy in the mean time. So come on Mass Effectors get your DLC on and keep on loving the game. Now if only I can convince them to make DLC that has to do romances…you know for us RP that love to shoot it up and put me in their movie…