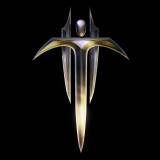 I saw the Dark Knight today and I have to say that its one of the best movies I have ever seen. I really dont have much time to do any blog today so this is just a real quick update. I'll do a review/overview on it tomorrow or Friday. I also so Journey to the Center of the Earth. It actaully want that bad either. It wasnt the best movie ever but it wasnt bad. If you already saw Dark Knight then it wouldnt hurt to see this movie.

Well I finally decided after a long, but meaningful, period of time that I was giong to get a 120 GB Hard Drive for my Xboo 360. My original hard drive was faulty out of the box so I decided to just wait until I got enough money to get a 120 GB HD. Well just yesterday I was in K-Mart of all places and I saw it. "What the Hell", I thought so I got it and had it on my 360 not 10 minutes after I walked in the door. I had Elder Scrolls IV: Oblivion Game of the Year Edition that previously could not use do to the fact that I had a 64 mb memory card. My weekend was filled with demos and the Shivering Isles. All in All it was a good weekend.
I made my way to the first minor league I had ever seen, the Altoona Curve. Even though they lost horribly the mascots and the entertainment was the show stealer. Every inning there was something giong on and it was the funniest baseball game I had ever been to. Hopefully I'll get to go to more in the future.

So Many Games, So Little Time

The exciting game lineup this year and following into next year are top notch. With all these games coming out how can I possibly pay for food or clothes. I can already see the money getting pushed into the disk drive of my 360. Is it worth it. HELL YEAH!!! Games could be one of the greatest forms of entertainment ever created. It alows you to become a superhero with one push of a button or a time traveling cop form the future who is afrad of cats, OR even dogs. Its a huge stress reliever when I come home from a long day of school and work. If I feel like shooting some guys head off with a chainsaw launching gun, by God I'm going to do it. Enough of my rambling on lets get to the top 6 games I cant wait to play in the future. I dont know why 6 but it felt right to me. These are in no particular order.

#6 Fallout 3
The game looks, sounds, and plays great. Oh how I love the post apacolytic.


#5 Too Human
This game has been critized too much. In my opinion people dont know what there saying, lets get our hands on the retail version first then start slashing.

#4 Fable 2
Though I never fully played the first one, this one could take Game of the Year, maybe.


#3 Star Wars : The Force Unleashed
Im a huge Star Wars and Star Trek fan so this is a must buy for me. Kickin' ass with the force, NICE

#2 Spore
Im a huge fan of the Sims franchise so this game looks pretty sweet. I bought the SPORE: CC and love it. Cant wait to watch some Sporn


#1 Mercenaries 2: World in Flames
My friends loved Mercs 1 and I never got into it but this one looks pretty frickin' sweet, did you see that nuke explosion!

Too Human - Too Good or Too Bad?

As some or most of you should know there is a new RPG/Action-Adventure on the way in the form of a game called Too Human. And as some of you may not know the game is takeing some pretty hard slashings. Things from the camera to an akward control scheme, it seems that there really isnt much gamers can say about this game thats good, unfortunaly. Too Human has been on my wishlist ever since i saw my first glipse of gameplay at I think E3 07. Ever since that faithful day I have followed this game until I hope to have it on release day. It makes me angry when I see some PS3 Fanboy or some multiplayer junkie start critizing this game. Denis Dyack of Silicon Knights said that to fully understand and have fun with the game you have to play it. Now I know that the demo was just released and that some people didnt really understand what was giong on. The reason was that SK took out 15 minutes of opening cinamatics so that the game's story wasnt ruined. Wait.
Does anyone care about story anymore? To extent yes but to another, no. I dont have any close friends that are as much of a video game junkie then myself so I cant really talk to them about story in a game. It seems people just go straight to multiplayer anymore and completly skip the singleplayer all together. This could one reason that more and more really good games are getting harder to find. The industry wants to make money. Period. But luckly  theres guys out there like Denis and the boys and girls from Bioware to keep me enganged in the story.
So what im saying is that gamers are not what they used to be. They have to complain about games they dont like even though there is a whole spectrum of people who do care about story and not so much multiplayer. Its nice to see in Too Human that there will be co-op and not huge death guantlents. Denis is a very smart guy along with everyone who thinks the game inudstry needs to look in the mirror. If you agree please leave a comment.
-Smitty

Numero Uno, Numero One, Number Uno, alright this is blog Number One. I just signed up on the infamous Giant bomb.com, and already posted more things then my entire time with gamespot. Sorry gamespot but Giant Bomb is way better. See that cruelness, i didnt even capitalize gamespot's name, mostly because i forgot and i dont want to change it. Its also 4 in the morning and im 3/4 dead. I think this blog will consist of things that i want to talk about. Games, recent game purchases, wishlists, and so on. After my extensive tour of this amazing site, i think Jeff, Ryan, Vinny, and Brad are my new heroes, sorry dad. Im looking forward to posting and you guys reading. Take care

man i better get off my computer or ill fall asleep and wake up naked in ditch, hopefully, Just kidding, kind of.
-Smitty
1 Comments