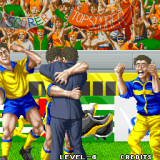 Getting Jiggie with it.

Banjo Kazooie: Nuts & Bolts is a game that I have no interest in.
I have never had a relationship with the company Rare. In the my forming years, I was a Mega Drive man(Genesis for most). Hence my childhood impression of Rare, a Nintendo company, was limited to ink, paper and (largely) complimentary words. Words that I enviously read, visualising magical scenes of gaming bliss beyond my Sega stained fingers.
So too, the description of N64 gaming paradise printed on the pages of EGM or Gamepro. By then my envious heart had turned cold by years of entrenching myself in opposition to Nintendo through my choice of console. Each complimentary word I read with sneering incredulity.

By the time I got my first Nintendo console since the NES, the ill-fated Gamecube, Rare had already been sold onto Microsoft and along with it with my entry pass into the now legendary, magical Rare realm disappeared for another generation bar for one kingdom left behind. A kingdom of dinosaurs…and foxes. Well, a fox. Starfox Adventures, although largely received with minor critical enthusiasm, blew my mind.  The game, I latterly realised, cribbed from many of Nintendo’s past masterpieces, most notably Ocarina of Time. But was as fresh as a cool summer breeze to me. The somewhat open world gameplay and beautiful graphics held me captive for many an hour.

This was but a fleeting taste of Rare’s magical elixir. A taste that I forgot with the first sip from Nintendo’s first party brewery.
The Rare offerings on 360 did little to jog my memory. Each title was like a watered down drink at a cheap bar. You know that there is enough in each to taste it, but not enough to get you drunk. The only title that kept me interested long enough to finish it was Perfect Dark: Zero, which was mainly due to the lack of alternates for my gaming time.
And so this long-windedly brings me back to Banjo Kazooie: Nuts & Bolts. I purchased this game only because of a special at an online retailer that cut the price down to under $20!
After Brad’s vehement promotion of the game’s merits, and latterly, the rest of the Bomb squad‘s agreement, I thought it would at least provide me with some hours of amusement at least in line with the price of the game.

However, having only sceptically ready Brad’s review I wasn’t prepared for BK:N&B. My very dreams are haunted by floating Jiggies and large, jet-powered trolleys.
The games biggest hook is the vehicle editor. At first glance, this looks like a throw away feature. I didn’t even bother with it until I finished the easy missions. After constantly failing one mission, I finally stepped inside its deceptively simple walls in an attempt to rescue my interest.
My first few creations, were admittedly crude, but soon it all started to click in the way that only games that flatter one’s intelligence can. A feeling that is so powerfully addictive, that it’s almost drug like. The genius is in the way the game challenges you, and then lets you lock yourself in you virtual shed full of parts to hammer out a vehicle. There is no judgement for a chosen method nor is there a bunch of arbitrary restrictions preventing you from the ridiculous, only a set of physics that can be harnessed or defied for success.
My only complaint are the missions where they rob you of that wonderful workshop by making you complete a mission with a pre-made vehicle that can’t be changed. Although I understand why they make you do this, I am like a spoiled child that wants to do things his way and therefore have to kick and fuss until its over.
I fear that many will overlook this game for many reasons, its platforming predecessor, its deceptive cuteness, its low price-tag, all do little to win over the average shooter lover or real time strategist or blockbuster gamer. But if, like me, and Brad, and just about everybody who plays this game, you give it a chance, you will find a gem worth untold riches.