by Jeff Gerstmann on November 4, 2009
Share:TwitterFacebookReddit

It's Guitar Hero 5 with different graphics and a more diverse setlist. If you like these 65 songs, you should probably get Band Hero.


Band Hero is a product that feels like a commodity, something assembled by a marketing team concerned only with the market demands currently not met by the existing Guitar Hero brand. But that cold, calculated feeling doesn't make it a bad game. This is the Guitar Hero 5 technology, with all of that game's strengths and weaknesses (along with a bit of new stuff), but whatever hard rock "edge" that series may have had has been smoothed over here, forming something that looks and sounds like it's three Coca-Cola cups and five Ford commercials away from being an American Idol game. The song list is more diverse than the typical Guitar Hero game, but that diversity means you'll probably enjoy a few songs here and there, but it's not going to be your favorite rhythm game ever. Also, the pop sensibility of its soundtrack makes for some awkward choices that really didn't need to appear in a full band game.

The things that work about Guitar Hero 5 still work here. The party play mode lets you jump in or drop out of songs that start playing as soon as the game finishes booting up. That concept has been expanded to a karaoke-style sing-along mode that isn't really much different from the existing party mode, but having a menu option marked "sing-along" probably helps point it out to the uninitiated crowd that will probably enjoy the game the most. It's got the same sort of difficulty options as GH5 does, and while the game's choice of music is inherently less challenging than Dragonforce, pumping the difficulty up to expert gives you something that feels accurate to the source material. You can go online to fill out your career mode band, or you can engage in some of the same competitive multiplayer modes that have been in the Guitar Hero games. You can even fire up GHTunes, the make-your-own-music mode that lets you craft your own tracks with an interface that feels just as impenetrable and sounds just as bland as it ever has.

But the feature set feels like it'll be wasted on the neophytes that are squarely in Band Hero's wheelhouse. That's not to say that rhythm game vets won't find anything on the soundtrack that they like, but by putting a virtual Taylor Swift in your game alongside tracks by Aly & AJ and the Spice Girls, I'm going to guess that there's a specific audience that'll find that stuff appealing.

But this isn't some sort of tween-girls-only party. There are songs from the Mighty Mighty Bosstones, The Go-Go's, Joan Jett, Culture Club, Poison, Styx, OK Go, and Santigold. How "L.E.S. Artistes" hasn't made it into a rhythm game until now is completely confusing to me, but it's probably my favorite track in the entire game. Unless you count "Wannabe" by the Spice Girls, of course.

The catch is that there are some songs here that don't really fit into the four-piece setup of a full video game band. When you want to perform that Spice Girls song, you want to sing it. Playing the programmed drum track in something like that feels utterly pointless, and that track is better suited for a karaoke-only game. Same goes for "Kung-Fu Fighting" by Carl Douglas. Also--though I understand she's very popular with a certain segment--I'd rather take a medium-strength punch to the gut than play anything by Taylor Swift, who contributes three tracks. The couple of songs by No Doubt, however, are just fine. Swift, No Doubt, and Adam Levine of Maroon 5 show up in the polygonal flesh here, much like Johnny Cash, Shirley Manson, and Kurt Cobain did in Guitar Hero 5.

The game allows for some importing and exporting with Guitar Hero World Tour, Guitar Hero: Smash Hits, and Guitar Hero 5. They don't appear to be the full setlists from those games, but you can view each list of available tracks before you opt to go through the process to see if the songs you want to make available in Band Hero are on the list. There's also a built-in music store, and the game will read the Guitar Hero-compatible music you may have already purchased for other games.

Band Hero's pop sensibilities make for a different-looking game than the ones that Activision usually puts out. It's got a crisp look with backdrops that fit with the subject matter... meaning you'll start out on a mall tour. Perfect. Some of the Guitar Hero characters appear here in pop-friendly form, too, so you can see Axel Steel all cleaned up and de-heshed, with short hair and a tight T-shirt... it actually makes him look like a total sell-out, which is kind of funny in its own weird way. You can also create your own guys and unlock additional gear through the career mode.

Like any other rhythm game, Band Hero is entirely dependent on your musical taste and how much you're willing to spend to acquire these 65 songs. If you don't like N.E.R.D., well hey, maybe you'll like Jesse McCartney, right? Actually, I'm totally messing with you. I'm pretty sure it's physically impossible for anyone to like Jesse McCartney. Just know that with the GH5 technology backing it up, you'll at least get a sound product on the back end. With that in mind, look at the song list, look at your wallet, and come to your own conclusion.
Jeff Gerstmann on Google+
Load Comments 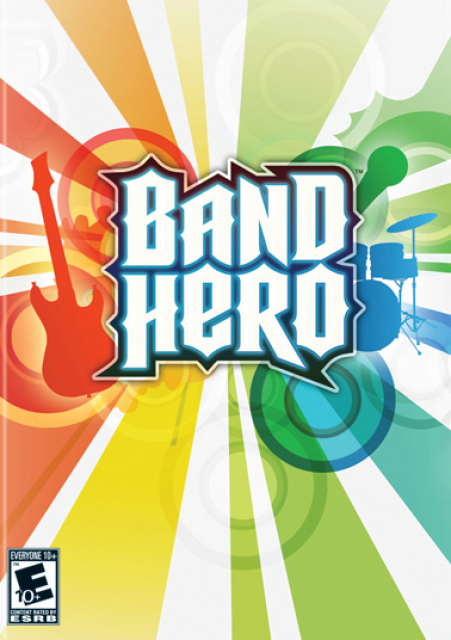