by Ryan Davis on September 3, 2008
Share:TwitterFacebookReddit

While there will always be plenty of room in video games for nostalgia, creating something brand-new that tickles those same sense-memories is a challenging proposition. There's plenty of familiar stuff in The Behemoth's Castle Crashers, a game that owes as much to Gauntlet as it does to Final Fight, but it works because it doesn't lean on lazy “hey, remember?” references. Instead of pandering with faux-8-bit graphics and repetitive button-mashing gameplay, Castle Crashers delivers an art style that is crude and playful in its own way, and button-mashing gameplay that rewards progress and evolves just enough to keep you engaged. The only things really holding Castle Crashers back are some unfortunate technical problems, but they're not enough to entirely suppress the game's gleeful abandon for both hacking and slashing.

The setup is straightforward enough, with players taking on the role of one of four Crayola-colored knights slicing their way through armies of goblins, demons, skeletons, and the occasional screen-filling boss monster to recover a bunch of princesses and a gigantic magical stone from an evil wizard. What keeps it all from being some tired-ass Dungeons & Dragons knock-off is the colorful art of The Behemoth's Dan Paladin and an absurd and unapologetically puerile sense of humor. Oversized treasure chests fall from the sky accompanied by cheesy techno, terrified deer rocket across the screen from the sheer force of their uncontrollable bowel movements, and when little yellow aliens show up halfway through the game, it's pleasantly unsurprising. The ending alone, which reminded me of Amped 3 in a free-association kind of way, is worth playing through the game to see.

As much theoretical fondness as there is for old-school beat-'em-ups, there's a reason those games fell out of favor--hitting one button for hours on end is straight-up boring. There's an inherent repetition to Castle Crashers, but the game mitigates this problem in a number of clever ways. In addition to the two basic attack buttons that can be strung together into multi-hit combos, each knight has its own elemental magic attack to blast enemies with. Figuring out the right attacks for the different enemies keeps things interesting, and you can do lots of crazy air-juggle moves which, when executed correctly, allow you to take out a number of enemies without touching the ground.

Though you can carry up to five health potions, the game only allows you one life per level, and there are definitely encounters that you'll be lucky to walk away from on your first try. While this could've been a recipe for massive frustration, there's a light RPG element that balances out the difficulty, rewarding you with new attacks and the ability to customize the strength, magic, defense, and agility of your knight. You can also revisit levels that you've already played, so if you're having trouble getting through a certain section, you can fall back and grind a few levels out on an earlier stage.

You'll find weapons on enemies and in stores that confer various combat bonuses, as well as animal orbs--essentially plushy animals whose effects range from increasing how fast you gain experience to helping you find secret items in the environment. Their effect on the actual gameplay isn't overly obvious, but I really appreciate the way they just indifferently float along behind you as you wreak mayhem. These features let the game go on for longer than you might expect from an arcade-style game like this, and it took me a good five or six hours to get to the end credits.

Any progress you make works seamlessly between the single- and multiplayer modes in Castle Crashers, though unfortunately, the online mode barely works at all, with rampant disconnects being a major problem. I also found that when playing with the full four players, Castle Crashers can be a bit too chaotic for its own good, and it ended up obscuring much of the complexity I enjoyed in the single-player game. The multiplayer isn't inherently bad, but I definitely found there to be diminishing returns as more players were added.

There's also a well-known bug in Castle Crashers that can annihilate any of your character progress, something I experienced firsthand. The Behemoth has stated that a title update is forthcoming, though a date hasn't yet been given, so until then, buyer beware. Despite these problems, and the game's higher-than-average $15 price tag, I thoroughly enjoyed Castle Crashers, though they also keep me from recommending the game as wholeheartedly as I'd like to.
Load Comments 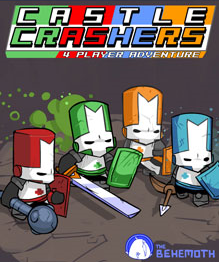