by Jeff Gerstmann on October 5, 2010
Share:TwitterFacebookReddit


There are terrific things in Comic Jumper. It's astoundingly absurd and, at times, absolutely hilarious. It's a game that reaches Amped 3 levels of FMV-laced madness, and if you've seen the cutscenes and story in Amped 3, you know that this is not faint praise. But there's a catch in Twisted Pixel's latest Xbox Live Arcade release. Actually playing Comic Jumper can be something of a chore. It's ambitious in spots, with a lot of surface variety, but once you've seen its few tricks, the gameplay's repetitive nature really starts to grind against the great sense of humor.

The real premise behind Comic Jumper is fantastic. Faced with a poor performance in his own comic book, Captain Smiley--a bulky superhero with a smiley face for a head and a wise-cracked star named Star on his chest--finds himself canceled. In order to make ends meet and prove his worth for an eventual relaunch, he'll have to guest star in other comics to earn money for his comeback. Additionally, Twisted Pixel--that's the company that developed the game--buys the rights to Captain Smiley, making him an employee of the game's developer. This ends up leading to everything getting incredibly self-aware, with plenty of opportunities for the characters to directly reference the game's development and, as has become something of a Twisted Pixel trademark, a lot of terrific live-action video. It's almost as if the developer took the wildest parts of 'Splosion Man and The Maw and expanded it all into an entire game.

It's funny, the writing is strong, and it also has a great visual style. What starts out as a fairly generic modern comic look quickly gives way to three additional styles. The fantasy style '70s comic, Nanoc the Obliviator, has an appropriately desaturated look and lots of fur boots, evil birds, and... uh... golf balls. It makes sense in context. After three levels of that, you'll move onto a silver age style, where "invisible" ropes are clearly seen as dashed lines and a governing body attempts to maintain moral standards by fining you every time Star decides to swear. Things really go off the rails after that with a manga style, which, cleverly, has you moving from right to left instead of left to right. Smiley takes on a Cloud Strife sort of look in the manga style, and jokes are made about how the game's creators probably didn't bother to do much actual research into the source material before writing a bunch of easy, yet great material, all of which is well-delivered by a pretty seasoned voice cast.

All of that good, fun comedy makes it a little easier to get past Comic Jumper's weakness: it isn't much fun to actually play. The action rotates through a few different basic concepts, but the majority of the game is a sort of dual-joystick platformer/shooter, where you use the right analog stick to aim at targets and can also jump or slide. The controls are mostly mapped to the triggers and bumpers, to make things easy to manipulate. But the action is very basic. Enemies fly or run onto the screen, you aim at them, they eventually blow up, you move on. Many of your foes soak up way too many bullets before falling, even if you've upgraded your attack power. Some of them shoot back, forcing you to jump or run out of the way, but that's about it. Occasionally the game will break into a Quick Time Event, a flying stage, an extremely dry melee system, or something reminiscent of Cabal or Panzer Dragoon, where you control an on-screen reticle to aim at enemies while also dodging incoming projectiles. The game is certainly ambitious, and it's cool that it manages to switch styles on the fly, but with no one type of gameplay feeling particularly exciting, it all seems a little academic. At times it can get challenging, but a lot of that is muted when you play the game as a slightly slower pace, so as long as you're upgrading your abilities frequently and aren't just blindly running into enemies, it's never impossible.

But middling gameplay isn't enough to stop Comic Jumper. While I found myself disappointed with portions of the game, the sense of humor and green-screen madness on display make Comic Jumper something much, much more than a basic platformer, and it's this aspect of the game that makes it relatively easy to recommend.
Jeff Gerstmann on Google+
Load Comments 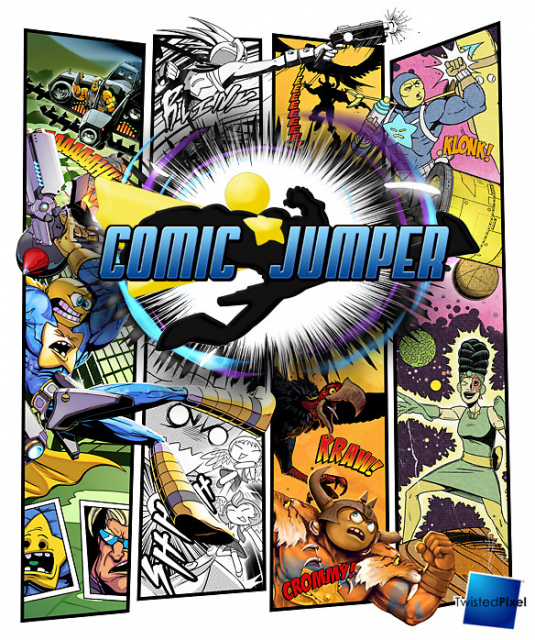