by Brad Shoemaker on July 31, 2012
Share:TwitterFacebookReddit

Xbox Live's vaunted Summer of Arcade program has been a hotbed of retro-styled 2D action since it began, with yearly offerings that have so far drawn inspiration from NES classics, scrolling beat-em-'ups, and the Metroidvania tradition. This year we get Deadlight, a zombie thriller that pays clear homage to the measured, deliberate action of classics like Prince of Persia and Out of This World. That is to say, when you jump while standing still, you give a little vertical hop, and jumping to the side produces a leap with a fixed distance. You also do a lot of grabbing onto ledges and hoisting yourself up. It's that kind of game, and it's a good one...up to a point.

Perhaps as ultimate tribute to its predecessors, Deadlight is itself set in the '80s, though you'd hardly know that based on the action that takes place over the course of the storyline. The only hints at the game's period setting come in the pages of your character's journal, which briefly reference Chernobyl and nuclear war, and in a couple of peripheral touches like a cassette-tape loading animation and some knockoff Tiger LCD handheld-game collectibles you can find. Otherwise, this is standard zombie-survival stuff, as you pick your way through the ruins of Seattle, avoiding the ubiquitous undead and brushing up against the crazed remnants of humanity and the fortresses they've built for themselves. The storytelling is weighed down by hammy voiceover and a lack of focus, and reaches for dramatic ambitions that lie far beyond its grasp, culminating in one of the more flabbergasting conclusions I've seen in quite some time.

Then again, the storyline could be complete garbage in this sort of game as long as the action is on point, and you'd still end up with a satisfying piece of entertainment. The first of Deadlight's three acts indeed offers exactly what you'd want from a game like this, requiring you to meticulously leap and climb your way through ruined urban environments to get from place to place. The game smoothly introduces new mechanics--a running leap and roll, a fire axe, a pistol and shotgun--and starts to integrate them into the increasingly intricate level designs, forcing you to use your full repertoire to navigate each obstacle. The game also admirably teaches you to avoid combat when you're facing too many zombies. Ammo is pretty scarce, and even with the axe at your disposal, taking on more than three or four zombies at once can quickly end with you being overrun, so you need to know when to just get the hell out of there instead. It's to the game's credit that a lot of the individual scenarios do let you choose flight over fight, especially since you can yell out to the zombies to get their attention and lure them one way before you deftly maneuver around them and continue on.

Once that extended tutorial period was over and I had all the game's abilities at my disposal, I was really getting into Deadlight's groove and felt excited about digging into more elaborate trials later on. But the game takes a hard left turn after that first act, interspersing your journey with a number of hectic, demanding action scenes that feel completely at odds with the methodical nature of the gameplay and the protracted, unresponsive way your character's animations play out. Picking your way through a series of rickety platforms and ladders is fine when you can do it at your own pace; when the game forces you to run through that same sort of area at breakneck speed, while you're being chased by a machine-gunning helicopter and with absolutely no margin for error, you're likely to simply have to die a few times to learn the exact layout so you can run it again perfectly. Other areas of the game hit you with things like a collapsing building that doesn't make it clear it's going to collapse until it's too late for you to reverse course and get out of the way, or a series of booby traps that likewise will kill you before you can avoid them if you don't already know they're there. Fast-paced action is not what this sort of game excels at, so it's baffling that the designers wanted to force you through such sequences so frequently.

Outside of these isolated scenarios, the limitations of Deadlight's core gameplay also become apparent toward the end of the game in a number of minor ways that can add up to a major annoyance. Zombies have a habit of shambling slowly out of the background before snapping onto the game's active 2D plane, which looks really cool but makes it tough to gauge when you're actually able to hit them. Given how slow you are to move into and out of the attack animation, if you swing too early you can find yourself whiffing through thin air and then getting grabbed before you can get out of the way. One area in particular toward the end of the game wanted me to vault over a windowsill into a tiny space, pick up some ammo, reload my gun, shoot out a small target overhead, then vault back through the window--all while spawning infinite zombies into that tiny space. It's not that every minute of Deadlight's latter two-thirds is full of this kind of clumsy gameplay, but enough of it is--and enough of the quieter moments come with their own set of frustrations--to really detract from the overall quality of the gameplay, which otherwise feels pretty high. After such a strong start, it's disappointing the game doesn't fulfill more of its potential, and instead actively works against doing so in a lot of cases.

If there's one thing Deadlight nails with complete accuracy, it's presentation. The game establishes a credibly grim mood and visual tone from the very first scene, and--aside from the out-of-place voice acting--sticks with it through to the last shot. There's a fantastic amount of detail and tasteful distribution of light and shadow in each area, and the game uses to great effect the Shadow Complex trick of showing you a wide angle while you're outdoors and then zooming in close for interior scenes. Given how small everything often is--the characters often appear as faraway figurines, the camera is so pulled out--it's an impressive feat how cohesive the visual design remains throughout the entire game.

There aren't many action games in this particular mold to begin with these days, so those with fond memories of Deadlight's spiritual predecessors will likely have a reasonably fulfilling few hours here. Without an existing sense of nostalgia for the source material, though, you may find Deadlight's minor flaws collectively outweigh all the things it does right. It's one of those cases where Xbox Live Arcade's requirement to offer a free demo with every game is especially valuable. 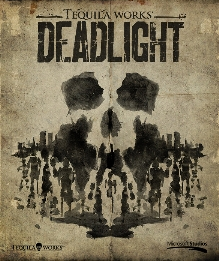