by Brad Shoemaker on December 4, 2012
Share:TwitterFacebookReddit

Far Cry 3 takes the ambitious background mechanisms of the last Far Cry game--things like roaming wildlife and dynamic fire--and wraps an immensely fun and rewarding open-world game around them, set in one of the lushest jungle environments ever seen in a game. Far Cry 2 felt as much like an experiment in mashing together a handful of self-propelling simulations as it did a shipping product, but this third one is a real, honest-to-God video game that restrains those dynamics in the spots where they might infringe on the fun you're having roaming around a tropical island, taking over pirate outposts, hunting rare game, and crashing hang gliders into the sides of mountains. If you like shooters and open-world gameplay at all, you will have a lot of fun with all this.

The story mode has one of the strongest starts I can remember in years, as your prep-school party boy Jason and his idly rich friends skydive onto the wrong tropical paradise and get themselves kidnapped by pirates and slave traders. The short introduction is wonderfully effective at both making you resent the privilege of the protagonist and his ilk, and filling you with greater revulsion at their inhuman treatment by the psychopathic pirate leader Vaas. This guy is one of the most genuinely and believably chilling video game villains in ages, leading a cast made up of pretty colorful and well-acted characters who play out the struggle between the pirates and the native Rakyat people for control of Rook Island.

What follows is a lengthy campaign comprising Jason's attempt to ingratiate himself to the Rakyat and other influential figures on the island, in an effort to spring his friends from captivity and get the hell out of there. The succession of story missions presents an uneven mix of great outdoor setups--where the kind of unpredictable mayhem and destruction inherent to open-world games prevails--and a few too many basic corridor crawls, which end up feeling a bit like a slog and are not where this game excels. The best part of Far Cry 3 is when you're running around out there in that enormous open jungle environment, where just about anything can happen. With pirates, mercenaries, native rebels, and both docile and predatory animals all going about their business (and constantly getting in fights with each other), a host of controllable vehicles from ATVs to trucks to hang gliders, an entire arsenal of military-grade weapons hardware at your disposal, and the ability to set practically everything on fire, hilarious and unique events aren't just an occasional delight, they're the norm.

Far Cry 3 takes some concepts whole cloth from other great open-world games like Assassin's Creed and Red Dead Redemption, but it's easy to look past the direct inspirations since the lifted elements just make this game way more fun. You'll need to climb and fix up a number of disabled radio towers, each of which acts as a unique platforming challenge unto itself, to reveal the surrounding map and side missions. Getting those transmitters back online also adds more guns to your ever-growing arsenal. Hunting and gathering herbs are important early-game activities, since you can craft the resulting items directly into better equipment and power-up items, and it's just fun to stalk your prey in the underbrush--and things get ridiculous quick when it turns out a tiger has been stalking you at the same time. There's even a leveling system and a full three-way skill tree that lets you spec out your character in ways that cater to the way you like to play. You'll probably end up with all the skills unlocked by the very end of the story, because Far Cry 3's prevailing ethos seems to be about making sure you're having fun in the open world as much as possible. All of these elements combine to give you a constant feedback loop of character progression that makes it really rewarding to get out there and do as much of this stuff as possible. Some of the formal side missions are pretty simplistic and don't stay entertaining for long, but there's so much else to do out there that you're not likely to get bored in this game.

Enemy-held checkpoints--one of the weakest points of Far Cry 2, due to their neverending stream of respawning enemies--become maybe the best part of Far Cry 3, since they're now a formal type of side mission. The enemy-tagging mechanic of the original Far Cry, and Crytek's subsequent efforts with the Crysis series, is especially useful here since you can now tag an enemy on the fly just by aiming at him for a second, and once he's tagged, you can see his movements clearly through walls. Each one of the roughly three-dozen outposts on the island thus becomes its own little self-contained combat puzzle, which you can approach from any angle and deal with however you want, whether by picking off enemies from a distance with a silenced sniper rifle, going in with a blaze of gunfire, or sticking the guards in the back with some amazingly fun combo takedown moves, better versions of which you unlock as you level up. There are even two levels of bonus experience if you manage to clear out an entire outpost without alerting anyone. Taking over outposts is one of the most interesting things to do in the game all the way up to the end, and they just get more satisfying the more special attacks you've unlocked.

It's a good thing Far Cry 3 gets so much mileage out of just about every aspect of its gameplay, because by the time the credits rolled I felt extremely let down by the squandered potential of the plot. At the outset, the game goes out of its way to stress what a pampered scaredy cat Jason is, but then never justifies why he's immediately able to skin animals, operate high-level military hardware, and gun down hundreds of soldiers like some kind of special forces survivalist. The game repeatedly relies on that tired old video game cop-out, the dream sequence, to avoid actually having to address major plot points, which usually leaves you asking "What the hell just happened?" But you never find out. And the story has a fundamental problem with momentum. There's a protracted sequence in the middle made up of repeated fetch quests, and the whole thing really starts to run out of steam in the last third or so, after it prematurely wraps up some story threads that should have formed the basis of the entire game right up to the climax. The only reason I care enough about the story's failures is because it's so darn good early in the game, and if it had matched that quality evenly through to the end, we'd probably be talking about this as one of the best games of this entire console generation.

You sure can't accuse the game of lacking for content, though. In addition to the massive open-world story mode that you could spend dozens of hours in, there's a healthy suite of multiplayer modes too. The developers set out to include a full cooperative campaign that's more than a little similar to Left 4 Dead, right down to the four stereotypical characters (such as an Eastern European mobster and a Trainspotting-esque Scottish hoodlum) you can play as. There's a neat story justification for all this, with a lengthy CG cutscene setting the whole campaign up, and the things that happen in the co-op campaign tie into the world the game creates in a reasonably clever way.

The scenarios in the co-op campaign are linear, standard first-person shooter affairs that don't offer the sort of open, varied gameplay that the main campaign is so good at. You're basically moving from one area to the next, fighting off a bunch of enemies, and occasionally completing some objective. There's some amusing variety here and there, though, like a sequence where all four players are positioned up on a ledge and can only use an unlimited supply of grenades to take out a horde of enemies rushing in (and a player ranking afterward awards bonus experience based on how well you did). There's quite an elaborate loadout and class system here that lets you unlock not only new weapons and attachments but basic passive bonuses and even some team area-of-effect buffs like you'd see in an MMO. That leveling system also carries over to a perfunctory competitive multiplayer mode replete with its own leveling system, unlocks, and ability to prestige. It's fine that this mode is in here if you're really looking to wring as much time out of this game as you can, and there's even a pretty easy-to-use map editor in here if you want to make a map where you dig a big hole in the ground and fill it with sharks. But none of this stuff is required for me to recommend Far Cry 3. The game more than justifies its existence with the single-player mode alone.

You'd be remiss when talking about Far Cry 3 not to mention how good this game looks on the PC, with the sort of DirectX 11 features that will stress any hardware currently on the market. I had plenty of those "Wow, games look like this now?" moments while creeping through the brush or sailing over the island on a hang glider. It also scales quite well; I was able to get perfectly acceptable performance out of my nearly three-year-old machine at home on above-average settings, though I was having so much fun with the game that I couldn't resist upgrading my video card just to max it out. The console versions retain a surprising amount of the PC version's fidelity, down to the density of the island's foliage and the shafts of sunlight peeking through tree branches, but they do so at a terrible cost to the frame rate. The game is generally playable, and if you haven't seen the PC version you won't know what you're missing, but with performance well below 30 frames per second that dips down to 20 or worse in the heaviest action, you shouldn't play this game on a console unless you have no other choice. Even a modestly equipped PC will offer a much better experience.

Ultimately, Far Cry 3 left me a little conflicted. It's a smartly designed open-world game with a ton of stuff to do, and the random acts of hilarity that occur out in the jungle will constantly leave you with unique stories you'll be desperate to tell your friends. If the story had made good on the strength of its initial premise, Far Cry 3 would have been shoo-in for best game of the year. As it stands, it's still the most fun I've had in an open world in ages, a game that plays so well and looks so good, I wish every other piece of it reached the same high bar. But you should play it anyway. 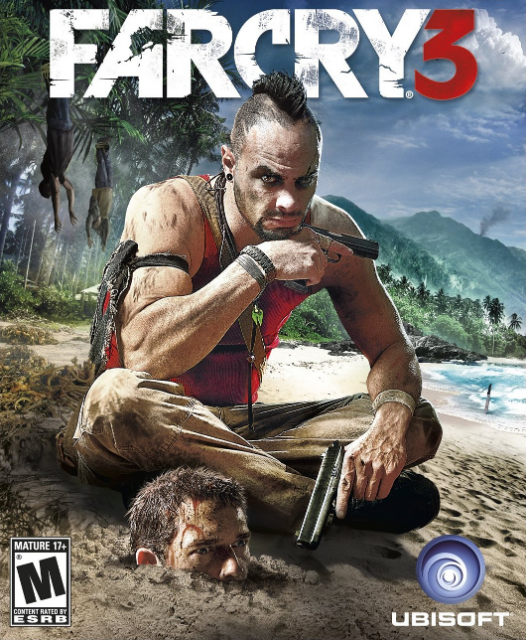