by Jeff Gerstmann on October 12, 2012
Share:TwitterFacebookReddit

Plenty of racing games have tried to split the difference between simulation and "arcade" racing in the past, but there aren't many that do it as well as Forza Horizon.

I've never understood people who don't drive. Big city folk, mostly, all reliant on their "public transportation" or their "bicycles" instead of getting behind the wheel of a machine that may very well kill them someday. That tender grasp, toeing the line between our world in the next, is the deep, dark core behind our fascination with the automobile. Video games represent society's relationship with cars in a variety of ways, from kart racers for the kids all the way up to intense simulations that all but require you to build a cockpit facsimile in the middle of your home. Any racing video game--especially one on a console--is going to split the difference between those two extremes, but games that really try to appeal to the "arcade" audience as well as the simulation crowd usually end up producing a watered-down mess that pleases no one. Forza Horizon threads the needle and pulls it off surprisingly well.

Horizon is an open-world, thrills-first twist on the Forza franchise that starts with the great physics and performance that the Forza Motorsport series is already known for and adds the sorts of things you'd expect to find in an open-world racer. There are tiers of events that unlock in chunks as you finish out the previous tier, sets of "unsanctioned" street races that aren't really any different from the main events, but they earn you cash instead of progression points, races against the game's cast of characters (which pop up as you move from one tier of main events to the next), and one-off showcase events that get you cars by asking you to race against airplanes, helicopters, and hot-air balloons. Ultimately, the showcase events are heavy on the "show" aspect of things, because they feel more like time trials with aircraft flying overhead the entire time.

The showcase events pop up as your driver becomes more popular, which is one of the other types of progression built into the game. You earn popularity points for fancy driving, and it feels like an offshoot of the Project Gotham kudos system. You'll get points for burnouts, drifting, near misses, and other acts of genuine skill, but you'll also get points for trading paint with other racers or busting up street signs and other on-track obstacles. The notion of earning points for driving that lacks finesse is perhaps the most un-Forza-like part of the entire game, but don't mistake this for a Burnout game. There's nothing to be gained by slamming into opposing cars, though smash-ups don't feel like they're as catastrophic as they can be in Forza Motorsport, mostly because all of the car damage is merely cosmetic.

When you're not racing, there's a large open world to explore, and the game gives you a few reasons to do some cruising. First, there are 100 signs hidden in the environment that each give you a 1 percent discount on car upgrades when smashed. Find them all and your upgrades are free. Also, nine "barn finds" pop up over the course of play. These are old cars that have been hidden around the world in barns that exist off the beaten path. When one activates, an area of your map lights up to give you the general location of a barn, so you'll have to explore that area in order to figure out how to find the exact spot. You'll drive past plenty of these collectibles over the natural course of the game, as well as various speed cameras and zones that measure how fast you're moving through specific spots and record it to an online leaderboard.

So there's a good variety of things to do around the world, but if you'd rather fast travel, you can warp back to the central hub or to any of the fast travel points you've uncovered. Warping to those points costs money at first, though there are a few simple tasks you can complete at each hub that eventually reduce that cost to zero. If you're the impatient type that hates exploring and driving from one objective to the next, you'll find this fast travel system to be lacking. But the game's driving model is interesting enough to make the journey worthwhile, so just calm down, OK?

Online, the game allows up to eight players to get in and race. You can get right down to it with a series of preset events or you can free roam in the world, which allows players to get into co-op challenges. These challenges require all connected players to perform specific tasks. Some are passive, like driving lots and lots of miles across all sessions. Others are active, like one that requires all players to pass through a speed trap while driving above a certain speed. Oh, the catch there is that all the drivers need to pass the speed trap within a few seconds of each other, so you'll have to talk it out over your headsets and get in a proper line of cars to nail it properly. The list of co-op challenge isn't huge, and it never gets quite as inventive as Burnout Paradise's similar system did, but it gives you something to shoot for when in free roam, which is great. You can also get into playground games like Infection, which gives one of the players a horrible disease that spreads to other cars after a collision, so the last car standing wins. King makes one player the king, and the other players try to smash into the king to steal the crown. A timer ticks up while you've on the throne. It's simple but effective stuff that gives you more to shoot for than just racing.

You'll still upgrade your cars--either automatically or by picking out specific parts--but there's no tuning aspect to Forza Horizon, so you won't be directly adjusting things like ride height. You won't be trading cars or tuning setups in an auction house, but the vinyl editor from the previous games makes it over intact. You can even import your vinyl groups from Forza Motorsport 4, which is great news for me since I created this extremely basic and dumb (but accurate!) bottom-row Space Invader two or three games ago, and it's been haunting my player storefront ever since. Players can sell or give away their vinyl groups via a simplified version of the store setup from previous Forza games.

The only time Forza Horizon doesn't look fantastic is when you're standing still. A lot of the grass textures that you'll see at the edges of the road are pretty rough up close. But the not-so-secret secret there is that you probably won't stop moving very often. Virtual Colorado has terrific lighting and a day/night cycle that gives you a lot of different looks for each environment, from the sun peeking over the mountains to fireworks over the Horizon Festival's hub zone at night. It feels like a genuine, lived-in place that's lively in a way that makes Forza Motorsport feel stodgy and sterile by comparison. That feel is supported by a trio of radio stations with DJs that often comment on what's going on in the overall tournament in-between a variety of very "now" music selections that fit the game's tone quite well. Let's face it: this gaudy spectacle of a fireworks-laden race festival is just crying out for as much wobble bass as possible, and the Horizon Bass Arena station features just enough dubstep to either keep you excited or make you sick, depending on your stance.

If you have a Kinect hooked up, you'll have a reason to shout over all that Mord Fustang, Skrillex, and Wolfgang Gartner as you can use the voice recognition on the Kinect to point your GPS at the next event or other important locations. This is easily--and more precisely--completed on the game's map screen, but shouting "GPS! Next event!" and seeing the driving line come up and point you in the proper direction is still somewhat novel. If nothing else, this modest implementation actually makes Forza Horizon one of the few games that's telling the truth when its box claims it's "better with Kinect."

With around 120 or so events to choose from, Forza Horizon might sound somewhat slim when compared to Forza Motorsport 4, but it gains a lot more depth from its open world than it initially lets on. But most importantly, it manages to simultaneously feel like a Forza game while also letting in more of what makes racing games fun for all players, rather than staying strictly focused on those of us who want strict simulations of varying realism. It's got a cockpit view, but it also gives you points for smashing through street signs and performing totally sick J-turns. That might sound like a contradiction that would cripple a game, but Horizon manages to make all of these different elements fit together in a way that seems natural. And that's pretty impressive. 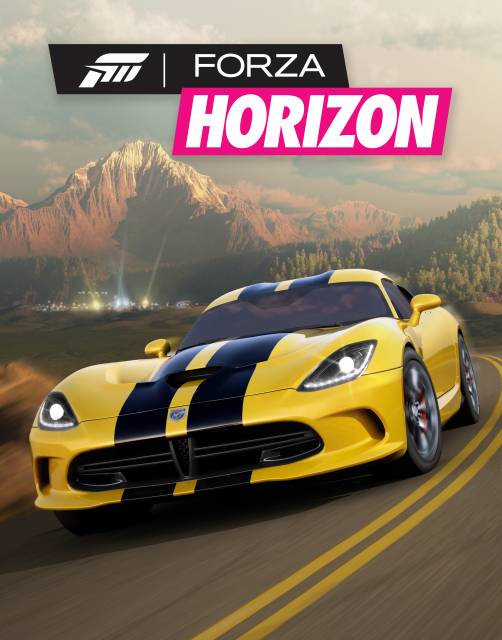