by Ryan Davis on September 4, 2009
Share:TwitterFacebookReddit

Neversoft delivers a bubbly, slick-looking Guitar Hero game that benefits from big production values and a more accessible feel, and suffers from some questionable choices and a track list that lacks cohesion.


After last year's Guitar Hero World Tour, Activision and Neversoft get back to a regular numbering scheme with Guitar Hero 5, a game that polishes up the existing formula following World Tour's shift to a full-band format. There are some notable new features and plenty of rocking to be had in GH5, but this is definitely a game more concerned with giving you what you expect from Guitar Hero than pushing any boundaries.

As the name implies, the Guitar Hero series has always put a premium on big, stadium-rattling rock songs, and despite the presence of drums and vocals, it seems like it's the fretted instruments that hold the most sway. You get 85 songs on the disc with Guitar Hero 5, and there are plenty of hard-rocking numbers in there from bands like Bon Jovi, Iron Maiden, Megadeth, The Rolling Stones, Smashing Pumpkins, and The White Stripes, among others. There's old stuff and there's new stuff, and a respectable portion of it is quite fun to play, but there are a number of songs that don't really agree with the game's rock-star attitude, like songs from Coldplay and Vampire Weekend, and some that just feel like filler. There just doesn't seem to be any real central vision to the song list. With all the licensing and audience considerations, I don't envy the task of trying to cook up a rhythm game song list that can be all things to all people. Still, Guitar Hero 5's approach to pleasing everyone meant that I found a handful of tracks that I really enjoyed playing, and a lot of material that I had little desire to revisit.

Comparatively, the series' glammy caricatured rock-n-roll fantasy aesthetic is intact and looking better than ever in Guitar Hero 5. The visuals in World Tour suffered from a certain mechanical blandness that seemed like a byproduct of the introduction of a character creator. While there are definitely some mannequin moments in GH5, everything is brimming with detail and color and movement. The shaky camera, the excess of colored light and smoke and pyro effects, and the increasingly ridiculous venues--which include an abandoned subway station, a boson reactor, and a barge beneath the Golden Gate Bridge--give the performances a terrific visceral punch. A lot of the character animation seems song-specific, which goes a long way to connecting the characters on your screen to the song that's being played. It even works pretty well when you're playing as your console avatar in the Xbox 360 version of the game.

This comes back to bite GH5 a little bit, specifically with the inclusion of a handful of real-life rockers as playable characters. Once you've unlocked Carlos Santana, Shirley Manson from Garbage, Kurt Cobain, or Johnny Cash, they're then available as playable characters for any other song in the game. It's kind of silly and absurd to see Santana or Manson playing other instruments on songs other than their own, but there's something disconcerting about seeing a semi-realistic-looking Cash or Cobain up there, rocking out and smiling it up and just trying to put on a real good lively show for the people like any other fabricated character you might randomly assemble. I think it's partially because they're both dead, so they can't give their consent for such use of their likenesses, but also because both were basically defined as outsiders, the kinds of guys who might not take kindly to basically being used as puppets. I don't think this is the venue for a dissertation on the topic, but suffice it to say that I found some of that stuff a little off-putting. I will admit, though, that there's something resonant about seeing Johnny Cash snarl his way through Rammstein's "Du Hast."

The modes in Guitar Hero 5 are fairly predictable, though each has been tweaked in some meaningful ways. The career mode is still basically just a long list of songs that you chew your way through, though each song now has an instrument-specific challenge associated with it that can earn you new character costumes and other bonuses. These can be simple score challenges, or they can be far more specific, such as using an upstroke to hit a number of notes when playing bass. It would be nice if there were more variety to the challenges, but it's a clever way to test your skills and to get players to try instruments outside of their comfort zone.

In what I've interpreted as a tacit acknowledgement that the proliferation of rhythm games has left many a living room with more plastic instruments than it really needs, quick play now lets you play with up to four of any instrument you've got, which is also terribly handy when either no one or everyone wants to play a particular instrument. More than any of the past few games in the series, Guitar Hero 5 seems to recognize that not everyone is looking to get 100% on Dragonforce songs on expert; some folks are just looking for a little rock-n-roll and some casual fun. This culminates in the party play mode, which takes any competitive edge off the experience, letting players jump in and out or change difficulty or instruments all on the fly. If it's competition you want, though, there are a number of modes you can play both online and off, my favorite of which is momentum, which is basically a score challenge where the difficulty level you're playing at will adjust dynamically based on how well you're doing. Guitar Hero 5 features an updated version of the GH Studio toolset, which allows you to create your own songs, share them online, and download other players' creations, though the resulting songs still sound too much like the stiff MIDI songs that they are to make this feature terribly compelling.

There's something about the return to a standard numbering scheme for Guitar Hero 5 that suggests to me that this is, more than anything else, a commodity, a manufactured product, albeit a very attractive and energetic one. Neversoft seems more comfortable and confident than ever with this series it has inherited, but there doesn't seem to be a lot of passion behind the craft.
Load Comments 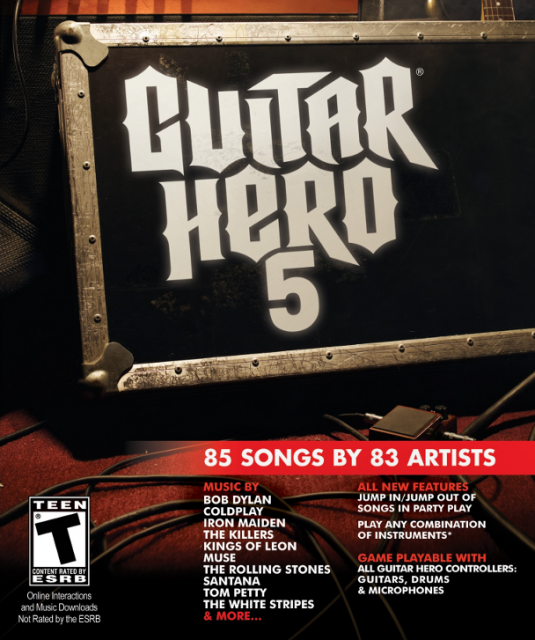