by Jeff Gerstmann on February 20, 2017
Share:TwitterFacebookReddit

Guerrilla's got something really special here.

Horizon: Zero Dawn is, more or less, an entire game based around Arthur C. Clarke's third law, which states that "any sufficiently advanced technology is indistinguishable from magic." What would happen if only one person had the world at her fingertips? If only one person had access to a smart phone and the entirety of the internet, what advantages might that give them over their peers? Replace "smart phone" with "networked augmented reality device," set things in a tribal world where anything the world's inhabitants don't understand is likely to be worshiped as a god, and you've got the basic setup for Guerrilla's thrilling new game.

That tribal world is Earth, in a far-flung future where tribal society is the order of the day. Hunters hunt with bows and spears, but in addition to boars, turkeys, and rabbits, deadly, animal-like machines also roam the landscape. Metal ruins of the old world lie below. This is where players enter the picture as a young girl named Aloy. As a child, Aloy falls into one of these forbidden ruins and finds a "focus," the aforementioned augmented reality device. Suddenly, there's a whole new layer to her world. She can extract data from computers, detect broadcasts, and analyze her environment in a "Batman detective vision" sort of way. This ends up making Aloy far more deadly with her bow, spear, and other weapons, too.

It also means that Aloy's story progresses along two branches. At first, she's the tribal outcast, attempting to gain favor in her small community and avenge the death of her caretaker. But as she ventures further and further away from her old village, she begins working with and against numerous other factions. The focus attached to her face also means that she's quickly thrust into quests that get her closer and closer to the truth behind the nature of the world itself. Why are they there? What happened to the ancient humans that came before her? Where the hell did all these vicious machines come from? Who made them? Who continues to make them? What do they want? The surface level "this faction of this tribe wants to take the city from this other faction" stuff is fine, but once the game starts making good on its initial setup and letting you peek behind the curtain, the story shifts into a higher gear. It's a fantastic science fiction tale that expertly hangs the next piece of information just out of reach without feeling like it's stretching its information out too thinly. I thought the game was coming to an end around two-thirds of the way through, only to discover that there were multiple hours of mainline gameplay left to experience and additional answers to seek.

By the end, Horizon comes to a satisfying conclusion in a way that left me feeling like they should probably never make a sequel. It's a near-perfect story that creates a world and also provides meaningful answers about said world. Not to soapbox about it, but games don't do that often enough anymore. The events of Horizon have weight and the game feels less like franchise building and more like a cohesive statement. Of course, the developers couldn't help but leave in one little bit that hints about what might happen if and when they decide to make another one, which I found to be a little unfortunate. But I guess that's business.

Zero Dawn is structured quite a bit like the recent Far Cry games. You'll level up, gain new abilities by slapping points onto a skill tree, and hunt for crafting materials that let you hold more things in your inventory. You'll happen upon a handful of bandit camps, tag enemies, and try to prevent them from setting off an alarm if you're spotted. You'll climb a few things to reveal objectives on the map, but the game manages to craft a decent take on that concept that doesn't overstay its welcome. The stealth is satisfying, though some of the options you get to handle enemies can be a little game-breaking. For example, hiding in tall grass means you're effectively invisible, provided you haven't already been spotted. Early on, you can choose an ability that lets you whistle. It only ever alerts a single enemy, and that enemy comes right over to you, where you can take them out (unless they're one of the larger machines or armored humans) with a "silent strike." That doesn't alert the other enemies, usually, so you can do it again and again, clearing out entire areas with zero risk.

Open combat is more exciting, but it can also be slightly clunky. You always have a spear, which has a light and heavy attack. After some upgrades, a couple of heavy strikes will knock an enemy over, letting you jab them with a critical strike. The ranged combat is a bit more varied, though I never felt the need to use some of the fancier weapons, like a ropecaster that lets you strap enemies down, effectively knocking them over the same way your heavy melee strikes can. Or the tripcaster, which lets you set traps for enemies. The weapons work as advertised, but the different bows and arrow types always felt like the star of the show to me.

Fighting machines, especially bigger ones, gets easier if you pay attention to an enemy's weak points. You can knock off armor pieces and components as you fight, so disabling a stalker's stealth generator will make it unable to become cloaked. Knocking the gun off the top of a big cat machine means it can't shoot at you, and so on. There are lots of bits to chip off of larger enemies, and reducing their effectiveness is a great way to survive the larger fights. You'll have elemental arrows to exploit specific weaknesses, and a type of damage called "tear" is specifically designed to help you strip the machines clean before you start moving in for the kill. This leads to a few cheap moments where you can Skyrim-hop your way up the side of a mountain, where a machine can't follow, then patiently strip off every single piece from complete safety. But, by and large, it's an exciting system that makes every shot count and ratchets up tension in the bigger fights. Of course, if fighting isn't your thing you can reduce the number of encounters by learning how to override the machines, which tames them and makes them aggressive toward your enemies. Or you could always fire corruption arrows to confuse them into attacking each other... point being, the game has some nice options that'll let you play the encounters a few different ways.

The overall story is solid, but the moment-to-moment dialogue is also quite good. Even some of the smaller quests get their own fascinating twists and turns, and characters often defy expectations in welcome ways. Aloy is well-voiced as a character caught between worlds, someone who has to try to explain advanced technology to a bunch of religious zealots who think she's either the second coming or a demon herself. It all makes for a really refreshing experience that zigged when I assumed it would definitely zag on a few different occasions. That said, it's worth noting that a lot of the lip-syncing in cutscenes is remarkably off. In a game with such fantastic visual design, one that pays such close attention to tiny details, this sticks out more than it would otherwise.

Horizon: Zero Dawn is familiar but also really refreshing. It's not a short game (I spent around 30 hours with it), but the storytelling still feels concise and efficient. The combat has some nice options that make encounters fun, even when you're just stacking up stealth kills from the relative safety of a bush. And the presentation end of the game holds up its end of things with a solid soundtrack, great voice acting, and a cohesive design that makes all its disparate parts fit together. All in all, it's a great game, it's Guerrilla's strongest release to date, and I suspect I'll go back in after the fact to clean up whatever side quests and errands I have remaining, if only to spend a little more time in that world. 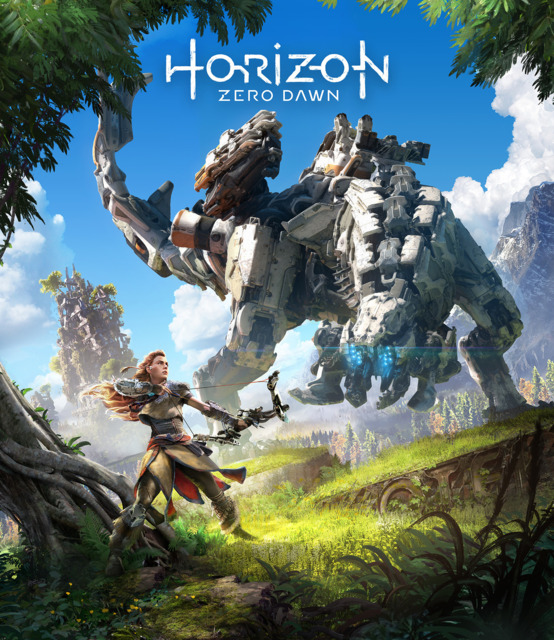