by Alex Navarro on November 5, 2012
Share:TwitterFacebookReddit

The year is 1989, and the place is Miami, Florida. You are standing outside the entrance to a building. There is a man on the other side of this door. He holds a gun. He is one of many men in this dilapidated building. They all hold guns, or knives, or bats. You do not know these men. You are only at this location at the behest of a mysterious answering machine message. Reasoning for your assignment is obfuscated, and yet your clarity of vision is startling. You know what must be done, and without hesitation, you do it. You kick the door in, knocking the man on the other side to the ground. You then mount him before he can regain his bearings, and begin slamming his skull into the ground. You do this again and again until all that remains of his pixelated skull is a growing red stain on the floor.

And he's just one of many to come.

Over the course of Hotline Miami's few hours of play, you will kill dozens upon dozens of men. And you will do so brutally, mercilessly, and swiftly. Learning why you are doing this is ostensibly the goal of Hotline Miami. All you know at the outset is that you are at the mercy of your own answering machine. Strange messages are left, indicating places to go, and people to kill, but they're as cryptic and muddied as your mind. It's perhaps apparent initially that you are not a well man. If not just because of all the wanton murder, but also because you see things. You talk to people who may or may not actually be who they say they are, or even exist at all. And then there are the guys in those creepy animal masks...

This is a game that requires multiple play-throughs to uncover all its secrets, though even once you do, there are still some things left to the imagination. One thing that is not left to the imagination is the result of your gameplay. Every time you finish a level, you'll leave the place you were littered with corpses, spent shell casings, and buckets of spilled blood.

Of course, while you're playing, you won't have anything even resembling enough time to take in the carnage. Hotline Miami operates at a pace that can only be described as "blistering." The moment you enter a building, you're effectively under duress until every single person is dead. Enemies are crackerjack shots, and instantly aware of you the second you cross their field of view, or make a noise. Given that the game uses a retro-inspired top-down perspective, it can sometimes be a bit difficult to gauge exactly what an enemy's eyeline might be. Fortunately, most anything that looks like an effective hiding spot is, and if it isn't? Well, it's not like you'll have time to think about what you've done, because you'll probably be dead.

You will also die in Hotline Miami. Frequently, quickly, and with aplomb. One hit kills you, and once you're dead, you need only press a button to reset at the beginning of a level section. Levels are broken out by floors. All you need do is clear one floor and get to the next one for a checkpoint to trigger. This is important, because were each level to drag on just a bit longer, the game would give way to irritating repetition. As they are, levels are still fun to play no matter how many times you die. I think in one section, I died upwards of 50 times, yet just kept resetting to play. With gameplay this tight, this frenetic, this exciting, it's hard to want to walk away.

With the right weapons, you can most certainly lay effective waste to the enemies before you without necessarily getting killed. But on your first play, you'll almost never have the most effective weapons at your disposal. This leads to improvisation, be it using doors as stunning agents, picking up weapons off of felled foes, or just using whatever the environment offers you to survive. The decrepit scenery isn't just window dressing. Let's say you see a pot of water boiling on the stove, and want to use it to scald a nearby bad guy. You can do that, and you should. Because it's horrible. And amazing.

The violence in Hotline Miami may be pixelated and obscured, but it's no less intense for it. The sheer speed at which you must operate, coupled with the tension of never being completely sure if an enemy will spot you if you creep around the next corner, is utterly gripping. You kill, kill, kill until there's nothing left but bodies, and you must do so with a ruthless efficiency that affords you no moment's pause to ponder the terrible things you've done.

That comes later, via quick cutscenes featuring other characters that may or may not be wrapped up in this whole mess, and exploration of your apartment. The apartment area is essentially just a hub where you collect your next mission, but as the game rolls along, and your character's sanity begins to fray, the aesthetics begin to directly resemble the tatters of your psyche.

That could be said of much of Hotline Miami's look and feel. The 1989 setting is no random choice. Every pixel of the game has been slathered in late-'80s grime. Its dirty, neon-tinted color palette blends brilliantly with the pulsing synth soundtrack, which is a particular highlight. Comparisons many have made to the Nicolas Winding-Refn film Drive are not inaccurate, nor accidental. The developers have cited that movie as a particular inspiration both aesthetically, and in the game's depiction of violence. If you find yourself nodding your head to the background grooves while doing horrible, detestable things, do not panic. This is very much the point.

Enjoying Hotline Miami doesn't make you a worse person, though you may find yourself wrestling with just why the act of deftly delivered murder is so damn much fun. It is because it's a lovingly crafted game, well-designed and deeply addictive. These facts do little to soften the reality of what you're doing, of course. In some ways, Hotline Miami most closely resembles the kind of "violent video game" boogeyman parents groups were so outraged by back in the industry's more formative years. It's a game time-traveled in directly from the fear-center of Tipper Gore's brain, circa 1989. It's pure, unadulterated nihilism with a candy-coated shell. And I'll be damned if it isn't one of the most intoxicating games of this year. 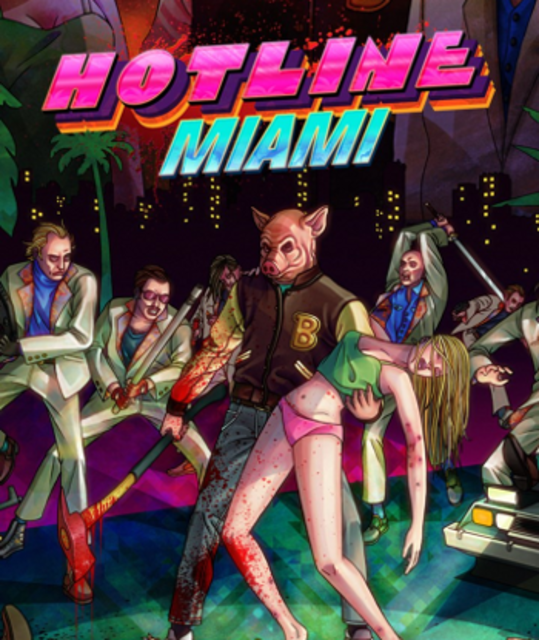