by Jeff Gerstmann on February 7, 2012
Share:TwitterFacebookReddit

Kingdoms of Amalur: Reckoning creates an interesting world and gives you good combat options, but the whole thing overstays its welcome a bit.

In very broad strokes, Kingdoms of Amalur: Reckoning is comparable to games in the Elder Scrolls series and, to some extent, games in the Fable series. It's easy to want to think of it as "Oblivion but third-person with faster, more combo-oriented combat," but that doesn't quite fit. You'll be able to call the names of other games out as you see the various things contained in Amalur, but it has a different style and scope than the games you're most likely to compare it to. That's just enough to give it a feel all its own.

The main quest line and the world surrounding it is probably the most gripping thing in all of Reckoning. You begin the game on a slab, as a corpse that marks yet another failed experiment at the Well of Souls, a dark science project designed to let humans and the other less-resilient races of the world come back from the dead, just like the Tuatha--evil elves that reincarnate after death--do. Amalur is also a world governed by fate, with fortune tellers ("fateweavers") all over the world able to let individuals know how things will end up. As the first non-immortal to be resurrected, you also re-appear as a blank slate to those weavers. The natural order of things is being upset, and by inserting yourself into various situations, you're literally making a difference in the world. This starts as a quest to figure out who you were before you died and returned--a detail you've conveniently forgotten--but quickly blows up into a quest to save the world. This certainly isn't the first game to deal with these sorts of ideas, but it's done well here just the same.

At the outset, you'll get to choose your character's race and basic appearance, but there's no class choice at the beginning of Reckoning. Instead, you'll place skill points into three different skill trees as you gain experience points and levels. The trees conform to the basic warrior, rogue, and mage archetypes and they'll give you active abilities--like spells and traps and stuff--as well as passive bonuses and additional combat options. As you spend points in the trees, you'll qualify for various destinies. Equipping a destiny gives you a stat bonus that corresponds to the way you've already been spending your points. So if you go strictly into the warrior tree ("Might"), you'll get bonuses that help warriors. Spending in the rogue tree ("Finesse") unlocks destinies that give you better ranged damage, and spending across multiple trees unlocks destinies like Battlemage, which give characters a boost to magic as well as straight-up fighting. In the end, I found the cross-class destinies to be the most useful, mostly because none of the high-level abilities in any of the trees are all that exciting.

Every time you gain a level, you''ll also be able to spend one point in a separate section of passive skills. This is how you get better at crafting, potion-making, persuasion, detecting hidden objects, picking locks, and so on. You can also find trainers in the world who, for a fee, will give you an extra point in one of your categories. Though some are more useful than others, by the end of the game it was simple to have maxed out every one of these stats.

The game is, as you might expect, broken up into quests. You'll start with quests that are part of the main storyline, but there are also faction-specific quest lines to pursue as well as scads of side quests and tasks strewn throughout the kingdom of Amalur. As a general rule, the better quests are the ones that show up higher in your quest log. The main quest line is pretty good, and it takes you across most of the game's world on its own. The faction quests are also quite good, for the most part, with the House of Ballads quest line probably being my favorite. That line is one of the best at demonstrating how the Summer Fae--these are also immortal elf-like guys, only they don't all want to murder you--view the world. They keep reenacting world events again and again, retelling the same stories for each generation. But with the world changing and fate not being as certain as it used to be, these tellings have gone completely off the rails. Your part in the quest line, if you so choose, is to play a role in these reenactments, killing the ones that need to be killed, saving the ones that need to be saved, and so on. The line serves as a great introduction to what the world is all about, and without it, you'll probably be left struggling to figure out what all this Fae business means for the world around you.

Then there are the side quests. Though there are a few objectives here and there that are reasonably interesting, this part of the quest log gets immediately clogged with menial tasks. This is where the game's dialogue, which is usually pretty well-written, just gets in the way and the game becomes a factory assembly line of quest after quest after quest. Obviously, these are optional tasks, so my recommendation is to skip as many as you see fit. They'll pad out the game and give you a reason to venture into every little cave in the universe, but they also turn what would have been a terrific 25-hour experience into a 60-hour grind. The other problem I ran into as a result of my completionist tactics was that I eventually became way too powerful. By crafting gems that regenerate health when socketed into armor and socketing them into as much as my armor as possible, I effectively became invincible. Most of the enemies out in the world conned as gray, meaning they weren't worthy opponents (not that that fact stops them from attacking you). In caves and other enclosed areas, enemies appear to scale to your level, but by this point I was so powerful that the interesting combat of the early game boiled down to simple button mashing by the end. Nothing could touch me. The optional combo attacks became totally unnecessary. The game lets you change the difficulty on the fly, but the hard setting doesn't change the enemy tactics to make it more challenging. If anything, it appears that it just gives everyone more hit points.

Up until that point, the combo-driven combat felt pretty good. Each style of weapon has its own spots on the skill tree, and you can spend points there to unlock additional attacks that come when charging a button press, or delaying your taps, or attacking from a blocking position, and so on. The combat feels active, especially when compared to the slow, block-and-strike moves of an Elder Scrolls game. You can equip two weapons at the same time, and each weapon gets its own button. If you like, you can combine fast-attacking daggers with a slower hammer or greatsword, but I found the bow to make an excellent secondary weapon for dealing with enemies at a distance.

Loot is sort of a big deal in Reckoning, and it's color-coded to give you an easy way to see an item's rarity. Some armor has slots for gems to let you tweak it to your liking, but there are a ton of different potential effects, like poison damage, fire damage, extra damage during the daytime, better critical hits, bonus health or mana, and so on. When you loot a corpse or a chest, you can easily take all items, but it's also a great time to compare the item you're considering to what you already have equipped. The game makes comparing loot to your existing gear very easy, and if you grab something that isn't useful, you can add it to your junk pile with the touch of a button. The junk system is nice, because once you get to a vendor, you can sell everything you've flagged as junk with one button press. I ended up flagging a ton of things as junk, mostly because the game seems predisposed to giving you gear made for warriors, which often requires you to have spent a specific number of points in the Might tree. By the end of my time with the game, I had over three million gold. That's... a lot of money.

There are plenty of really great things to see and do in Kingdoms of Amalur: Reckoning, and that stuff--the main quest line, the faction quests, and the interesting combat--makes the game fairly easy to recommend. But it's hard not to be at least a little disappointed when you start seeing the various spots where the game doesn't live up to the high bar set by its best content. If you finish it fast enough to prevent those doldrums from setting in, you'll have a much better time than the person who digs through every nook and cranny to finish every single side quest. 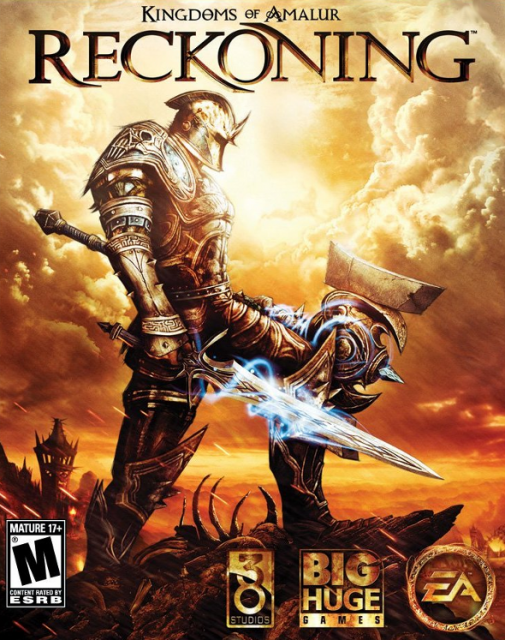