by Ryan Davis on September 5, 2008
Share:TwitterFacebookReddit

The awesome destructive potential of Mercs 2 is hamstrung by a litany of technical shortcomings and clunky design.

The original Mercenaries: Playground of Destruction was a pleasant surprise for me. It managed to take the GTA open-world format to a tongue-in-cheek, ripped-from-the-headlines military theater that was essentially an international buffet of stuff to blow up. Mercenaries 2: World in Flames changes the theater from a fictionalized North Korea to a fictionalized Venezuela, but the basic idea is pretty much the same. With the added power of current-gen consoles, this should be more than enough for a good time, but sadly, there's a bevy of design and technical problems that keep Mercs 2 from being all that it could be.

While your motivation in Playground of Destruction was strictly financial, it's been spiked with a little revenge this time around after your character gets double-crossed and shot in the ass (an event that the game considers funny enough to harp on for the rest of the game) by the newly anointed dictator of Venezuela. You'll spend the rest of the game working with the different factions in Venezuela--oil companies, rebels, pirates, American military, and Chinese military--to bring down the new regime. Of course, most of these factions have contradictory interests, so more often than not, performing a mission for one will decrease your standing with another. It's a fine idea, if not a particularly new one, but it doesn't always seem to work as advertised, and on a few occasions I found myself hated by everyone, forcing me to pony up a few million dollars in bribe money just to access one of the main story missions.

Your missions will almost always involve traveling to a location, blowing something up, and/or taking out a specific target. The game is at its best when the objectives are simple and straightforward, which is thankfully most of the time. When the game tries to get clever with the mission structures, I often found that I'd end up failing through no apparent fault of my own. For a game that is ostensibly a shooter, the actual shooting in Mercs 2 feels terribly inaccurate, to the point that it's often faster and more practical to just run up to enemies and take them out with a quick melee attack. You can pick up weapons from fallen enemies, and hijack just about any vehicle you see, though anything fun like a tank or helicopter requires you to play out a lengthy and eventually tedious hijacking minigame. Still, most of the time your best gear will come from air-drops that you can call in from the battlefield.

The most devastating weapons in your arsenal are air strikes, which come in a delicious variety of flavors, and are highly effective for knocking down buildings and clearing out swaths of enemies. One of the fundamental problems with Mercenaries 2 is the whole process of deploying air strikes, vehicles, and weapon load outs. First you have to travel to a faction-specific location to actually purchase your goods, then pause the game and assign the desired drop to a three-slotted context menu. Once you're back in the action, you have to thumb through the context menu using the d-pad to select the drop you want. If it's an air strike you're looking for, you have to stand still once you've equipped it, and any movement causes it to automatically disable. Considering that there are usually at least half a dozen enemies breathing down your neck anytime you actually need to deploy an air strike, all this standing around and flipping through menus makes it much more practical, though far less satisfying, to stick with smaller-scale explosives like RPGs and bricks of C4. Limiting the number of drops that you can have at the ready to three seems completely arbitrary, especially when you consider the breadth of gear that you need to access this way. It's one of the more significant bottlenecks in the game's ability to deliver a fast-paced, freewheeling experience.

A more streamlined interface would've done wonders for Mercenaries 2, though it's also got plenty of technical issues as well. Graphically, the game could be charitably described as uneven. Texture pop-in and level-of-detail issues are rampant, as are weird clipping issues, though for what it's worth, the frame rate holds up under all but the most hectic of conditions. What really gets me, though, is the sound in Mercs 2. Vehicle sound effects are often grating and monotonous, and middling voice work is made unbearable through repetition. One of the more maddening things about Mercs 2 is the way Fiona, your Australian support agent, will feed you the same completely useless tidbits of information over and over again. At a point I actually found myself mockingly yelling at my TV whenever she'd suggest, often in the middle of a firefight, I come back to headquarters and talk to her if I needed help figuring out what to do next for the 50,000th goddamn time. THANKS FIONA, I'VE KINDA GOT MY HANDS FULL RIGHT NOW.

The thing is, for all its problems, the basic act of blowing shit up in Mercenaries 2 is incontrovertibly awesome. The way a jeep will flip up into the air in a fiery ball; the wince-inducing white flash of an exploding oil container; the belching dust and debris of a crumbling building; these things are all immensely satisfying, and they make up for a lot of the shortcomings in Mercenaries 2. Unfortunately, while the game's exaggerated physics make for some great, over-the-top explosions, they also make the rest of the game feel weirdly floaty, and it never feels quite as technically sophisticated as other recent physics-heavy games.

That Mercenaries 2: World in Flames isn't better seriously bums me out. Even in its current state you can see so much potential for breakneck, anarchic fun, which makes its laundry list of problems that much more frustrating.
Load Comments 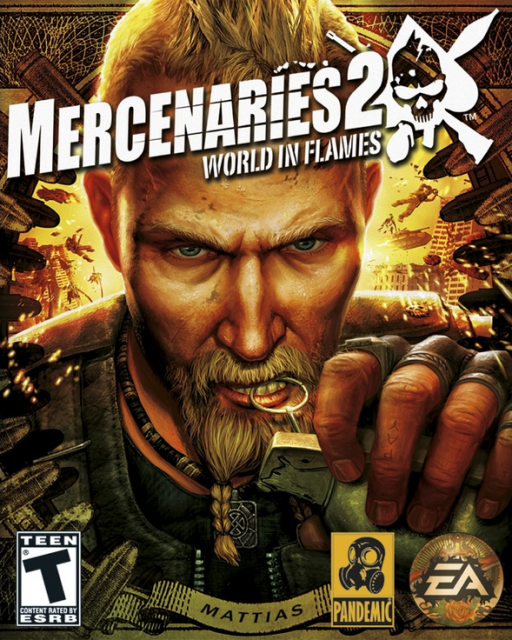