by Alex Navarro on September 26, 2013
Share:TwitterFacebookReddit

2K continues its tradition of eminently deep and thoroughly entertaining basketball simulations, albeit without many changes to its feature set.

Cover athletes are typically treated as little more than marketing tools in modern sports video games. Rarely do the presences of those featured athletes tend to bleed their way into the game itself, outside of the obvious stat boosts such a selection would warrant. NBA 2K has been one of the rare exceptions in recent years. In NBA 2K11, cover man Michael Jordan got his own excellent challenge mode, which highlighted key moments from his career. 2K12 featured a gaggle of classic superstars across multiple covers in celebration of the NBA's Greatest mode, which contained numerous nods to some of basketball's best old school rivalries. This year's title, NBA 2K14, once again tries to transcribe the story of its cover star into gameplay, albeit with less interesting results than usual.

This year's cover man is LeBron James. James is unmistakably the biggest name in basketball, and his presence looms large in this game, especially in the new "Path to Greatness" mode. Here, you are tasked with deciding where James will go when his contract is up at the end of this season. This immediately sounds alarm bells related to that disastrous "The Decision" moment from a few years back, where James went so far out of his way to make a big deal about his impending move to Miami from Cleveland that he all but alienated a huge swath of the league's fans (before most non-Cleveland folk promptly forgot about it and started loving him again). Fortunately, this isn't nearly as bad as all of that.

You're given two potential paths to choose from. The first simply has James deciding to stay in Miami, where he is presented with a series of game scenarios related to turning the Heat into a lasting dynasty. The other seems potentially more interesting up-front, in that it has James bolt following the end of the 13-14 season to see where else he might prosper. Unfortunately, there's no real element of choice here. All the scenarios and situations presented in this mode are scripted, so when you leave the Heat, you have no choice but to go try some time in New York with the Knicks, before eventually bouncing to more familiar territories.

The progression of the mode itself is fine. You play a series of key games, each set up by a bit of lackadaisical narration from James himself, which progresses the story as James works toward besting Michael Jordan's six championships. The best thing I can say about this entire mode is that the story does go to some entertainingly strange places (which I'd rather not spoil for those who may partake). Stuff like this is typically why I like the 2K basketball games so much. The developers' treatments of things like the Jordan Challenge in 2K11, and the classic rivalries in 2K12, are some of the most detailed and pleasingly crafted modes anywhere in the sports genre--never mind that those previous modes focused on the existing legacies of ex-players and teams, as opposed to making up imagined storylines for current superstars.

By comparison, the emphasis on James' forthcoming decision just feels like a mildly amusing oddity. The fan-fiction quality of the storylines is cute, but not terribly endearing once you realize you have no real choice in how the story progresses. And there's just something a bit grating about James actively endorsing more speculative frenzy over the next destination in his career, even if the scenarios presented here generally come off as more playful than intentionally prophetic.

Maybe I'm making a mountain out of a molehill here, but it just rubbed me the wrong way. Especially when you consider how little else has changed in NBA 2K14's feature set. Key modes like The Association, MyPlayer, and MyTeam are functionally the same as last year's game. Granted, MyPlayer is probably the best single-player career mode in sports gaming right now, and The Association remains as enjoyable as any franchise mode out there, but so many of the key elements of these modes have been recycled, leaving those who have already spent countless hours with them in previous sequels without much to discover this time around. MyTeam does at least get some additional modes and tournaments, but it still feels like a second-rate knockoff of EA's Ultimate Team modes. Online, the Crews mode has returned for those who want to compete with their created players against other online groupings. Otherwise, the online feature set is pretty much identical to last year.

That probably won't matter much for those who just want to play competitively. The good news and bad news of this year's game on that front is that the tweaks and changes made to the controls this year make NBA 2K14 one of the tightest-playing basketball games ever, though at the expense of much of what you may have learned last year.

2K14 goes buck-wild with the right stick. Last year's game certainly had its share of stick-based mechanics, but this year's goes well beyond any of that. Fiddling the stick back and forth in specific circles and motions will result in some crazy, if chaotic dribble moves around defenders, while pulling it back and holding will set you up to shoot. The nuances of these stick movements, not to mention the sheer volume of them available, will likely require a lot of relearning for those who got used to last year's control scheme. The good news is that learning them is totally worth it, as it gives you an insane amount of control over how you play. You can, of course, just use buttons for many of the simpler moves, but you're still going to need to learn the stick if you want to effectively navigate opposing defenses.

Those controls will take some getting used to, especially given how unforgiving the defense is this year. Last year saw some improvements to passing that made it a hell of a lot easier to move the ball around. This year's defensive A.I. catches up to those changes. Hang around in the paint and the defense will swarm, swiping and grabbing for the ball any chance it gets. Pass even a bit wildly, and the odds of the defense picking it off climb exponentially.

Keep in mind that none of this feels cheap or unearned. You'll see occasional shoddy behavior from computer players (not jumping for loose balls quickly enough, too many goaltending penalties, etc.), but by and large NBA 2K14 plays how basketball should. Contact between players feels largely how it should, with size and momentum determining how effective picks and contested shots play out--hell, there's even the correct amount of flopping from certain marquee players. This is also a hard game, even on the lower difficulty settings, purely by virtue of how smartly opposing teams play. Areas like play-calling and passing have again been tweaked to try and simplify the process for dummies like me, and those changes are certainly appreciated. But even still, NBA 2K14's learning curve is no joke.

For those reasons, along with the series' continued best-in-class visual presentation and broadcast commentary, I have no issue recommending NBA 2K14 to those looking for another tightly-tuned, exquisitely deep game of basketball for their current generation consoles. It'll certainly help if you have a particular interest in King James and his future endeavors, but NBA 2K14 has more than enough quality content to keep LeBron haters happy too. 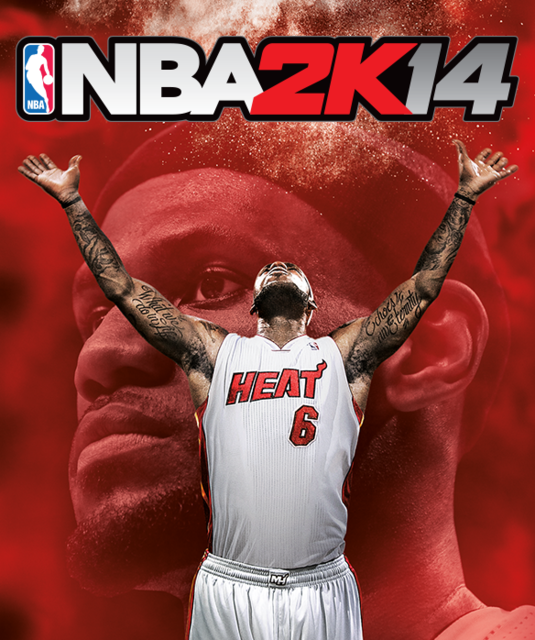