by Brad Shoemaker on February 9, 2009
Share:TwitterFacebookReddit

Those of you who spent a lot of time and quarters in 1980s arcades will probably remember R-Type, Irem's side-scrolling shooter notable for its anatomically suggestive enemies and teeth-gritting difficulty. The original R-Type and its first sequel, R-Type II, are back in a new $15 Xbox Live Arcade package called R-Type Dimensions that brings along some nice updates like pretty, high-def 3D graphics and simultaneous cooperative play. That painfully maddening degree of challenge hasn't gone anywhere, though.

Let's be honest here: R-Type, in its original arcade form, is not made for normal people. It's not the kind of fast-paced action game where dynamic reflexes and deft on-the-fly strategy will save your ship from the nonstop hail of enemies, bullets, and lasers. You can't maneuver your way out of tight spots, because if you're in the wrong place at the wrong time, you are dead, simple as that. You just aren't fast enough to dodge or outrun the obstacles in a lot of cases, and every death is a relatively major setback. It's the kind of unreasonable difficulty that will frequently make you want to hurl controllers across the room--and since most controllers these days don't come on cords, it could get dangerous and costly to satisfy that urge.

Getting good at R-Type is mostly a matter of memorization, playing and dying and replaying until you know exactly where the enemies are going to come from and what weapon you should be using in any given section of each level. It's kind of like beating your head against a brick wall until you finally break through it. That kind of game design may have filled plenty of developers' coffers with quarters back in the '80s, but unless you're a real stalwart fan of this genre, it doesn't play as well today when you've already spent your money on Xbox Live and you just want to sit down and enjoy the game.

Good thing Dimensions' developers realized that R-Type's original gameplay style--called classic mode in this compilation--was going to turn off a large part of the potential audience, so they came up with a much more forgiving alternative, infinite mode. Classic works on a checkpoint system, so when you die, the game drops you back at the last one you hit with no power-ups. If classic had been the only mode in Dimensions, I probably never would have finished either game. It's just that demanding.

Infinite mode gives you a kinder, gentler R-Type that respawns you immediately when you die, with no break in the action. (Ironically, just like a lot of other shooters did in the first place.) This certainly makes the two games shorter; you could probably play through both of them in about an hour, while I spent more than that just trying to learn and get through the fourth stage of R-Type alone on classic. But it's great that both varieties of gameplay are in here, playing to different skill levels and tastes.

There's a startling number of big and small additions to round out this package. The most obvious is the full 3D facelift Tozai applied to both games. It faithfully reproduces the art style of the originals while layering in the expected level of eye-popping effects, pretty glowing light sources, and so on. The best part is you can toggle between the old 2D and the new 3D instantly at the touch of a button, which is great for the sake of comparison.

But that's just the beginning of the visual updates. You can also play the game in a tiny thumbnail embedded in an in-game arcade cabinet, or you can have the 3D mode offset its camera angle so you're sort of looking down the long hallway of a given level. Those features are fun novelties that eventually seem pointless if you're trying to play the game skillfully. Lastly, there are some fun graphics filters for those of us with a nostalgic bent, allowing you to drop the resolution and color depth in various ways to slap a more pixellated, color-banded look on the new 3D graphics. They really went above and beyond on the graphics front.

Tozai also added two-player simultaneous play for the first time, which is another way to make the ludicrous difficulty a little more manageable. You can play co-op on Xbox Live, but the second player slogged through an unfortunate degree of lag in all the games I tested. In a game that requires split-second timing, any degree of lag can often be too much, so you'd likely be better off playing two-player on the same console for the proper experience.

Even the Xbox-specific stuff in here is handled well, with achievements that reward you for skill-based tasks (beat the first level using only the charged beam shot) as well as ones that you'll get simply by grinding through the game multiple times (collect 500 power-ups, kill 30,000 enemies). This game is also like The Maw in its exemplary handling of the profile-level goodies that you can unlock in some Live Arcade games. In this case, there are two gamer pictures up for grabs, and you'll be notified in the relevant levels where you can get them. You can even go back to the main menu later and download them again if you delete them for some reason. This surely sounds like small, small potatoes, but most games don't even notify when you've opened up a new gamer picture, much less give you the chance to install it again in the event of storage disaster.

Side-scrolling shooters have been on the endangered genres list for years and years now, but somehow they keep limping along with just enough major releases to prevent extinction. Downloadable platforms like Live Arcade have created a great platform for developers to release shooters with minimal investment, and Tozai has capitalized on that here with R-Type Dimensions, a feature-rich shooter that can appeal to people with either a passing or a serious interest in the genre.
Brad Shoemaker on Google+
Load Comments 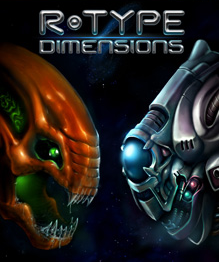