by Patrick Klepek on September 6, 2011
Share:TwitterFacebookReddit

Insomniac does a terrific job of making you forget about Resistance 2 with a sad, beautiful journey through the apocalypse.

To simply say Resistance 3 is the best Resistance game yet isn't much of a compliment, given that the previous one wasn't very good. Resistance 2 buckled under the weight of a sequel trying to do too much. What we got was a a terribly convoluted storyline, frustrating combat encounters (invisible enemies!) and multiplayer that, aside from the co-op, didn't please anyone. And the lack of a weapon wheel? Inexcusable.

The fans revolted. Plans for downloadable content were scrapped. Insomniac Games went radio silent. The disastrous response to Resistance 2 prompted change, with Insomniac promising to devote a full three years--previously, it was two--on development. The extra time has paid off.

Resistance's premise remains terrific, imagining an Earth around would-be World War II where Hitler never became society's greatest threat. Instead, an alien race is insidiously subverting humanity and turning them against one another by physically transforming humans into adopted Chimera. It's gross, laughable, and awesome. With Insomniac pivoting towards multiplatform development with OverStrike and some developers publicly acknowledging it may not work on the franchise again, Resistance 3 has some questions to answer. It's Resistance 3--the three is important. Insomniac owes us closure.

That doesn't really happen here, which works both for and against the game. Resistance 3 is the story of Joseph Capelli and his personal journey, less about how the human race tried to solved the Chimera problem and figure out why the heck were they here, anyway. If you're looking for Insomniac to neatly wrap up some fundamental question about the Resistance universe, it's not a spoiler to say that doesn't happen in Resistance 3. Maybe it's the Lost nerd in me coming through, but that's a bummer. The game often hints at much grander things that may or may not be happening, but it's never satisfyingly addressed.

I can't say what would have happened if Insomniac had made a game that set out to specifically answer those questions, but its decision to seemingly distance itself from what Resistance 2 started allowed them to make something different. It feels like a side story, but a really good one, as if Ira Glass took his microphone inside of this ravaged world and came back with an episode of This Chimera Life.

If Resistance 1 was the Chimeran invasion and Resistance 2 was humanity futilely fighting back, then Resistance 3 is humanity coming to terms with defeat. The Chimera have won, and Earth has moved on and accepted new overlords. It's not fair but it's what happened. Resistance 3 sells you on this eerie feeling immediately, as players wake up and begin exploring Joseph's makeshift town--which is underneath a real one. Humans have become intelligent cockroaches, barely scraping by, and despite everyone's best attempts to put on a smile, it's clearly game over. They're waiting for the axe to fall.

Joseph has a family, one he's worked hard to keep out of conflict. But Joseph's a fighter, and in a world where only war is left, he'll have to fight. Eventually, that fight comes to him. Dr. Malikov, the foremost scientific expert on the Chimera, recruits Joseph. Dr. Malikov think he has an idea. With the planet quickly cooling thanks to a mysterious tower in New York, Dr. Malikov believes destroying said tower will, if nothing else, buy humanity some time. His wife, Susan, sells Joseph on the hopeless pursuit by pointing out the equally hopeless future awaiting their son if the Chimera aren't defeated.

This bleek dramatic tension is punctuated by the game's gorgeous new engine. The lighting is spectacular, put to terrific use to emphasize how little influence our heroes have on the world around them. During one early moment, as the Chimera are walking through what appears to be an abandoned town, you're hunkered inside of an abandoned store, with wood planks covering the walls. The afternoon light seeps in from the outside, splintered apart as each Chimera walks by, and dust hangs in the air. If there was a button that would have allowed me to make Joseph hold his breath, I would've pressed it.

These crucial emotional moments are littered throughout Resistance 3, though too many times the game relies on awkward-looking computer rendered cutscenes that would have been far more effective as in-game vignettes. The ensuing adventure, one that takes players from the midwest to the eastern seaboard, is constantly changing scenery. You're never in one location very long, and by the time you've reached bitter, near-arctic New York, you feel as if as you've been on a real journey.

All that said, Insomniac makes the same, face-palming mistake from Resistance 2 of placing important story details in notes hidden in the environment, notes tied to unlocking trophies. Added narrative through optional exploration is fine, but please, please don't hide crucial bits of insight within things you may never come across. It's particularly egregious when the game is actively telling you to not explore, such as one big moment, where the music is blaring, encouraging me to run like hell, but I decide to stop, look around a corner, and find a note. Sigh.

But like clockwork, Insomniac's gaming bread and butter, crazy ass weapons, are alive and well in Resistance 3. This one has probably the weirdest, most absurd weapon to date: the Mutator. This one allows players to convert any enemy into a giant...zit? Basically, imagine the GES BioRifle from Unreal Tournament, except when the goo makes contact with an enemy, they begin to scream, vomit and have large sacks of something or other begin growing all over their body. Eventually, they die and explode everywhere. The alternate fire for the Mutator is a gas dispersal perfect for transforming groups into walking pimples.

Just like the environments, your arsenal is always changing in Resistance 3, with a new weapon being introduced every hour or so. Eventually, this can start to work against the game, as it becomes increasingly difficult to keep tabs on all the different attributes, alternate fires and upgrades of 12 weapons.

Ah, upgrades. Resistance 3 introduces weapon upgrades, ala Ratchet & Clank. Rather than coming across arbitrary add-ons for your various guns, the upgrades are tied to your style of play. Use a weapon, earn points, upgrade. Don't use a weapon, don't earn points, don't get an upgrade. By the end of the campaign, you'll have fully upgraded most of them, but what this style of upgrading system does is reward players who use the weapons they like and massage the completionist gene inside every player. As someone who doesn't care about achievements or trophies, I love this, as I'm unlocking new ways to influence combat by switching up the weapons I use.

Weapons have always been Resistance's greatest strength, even through the tough times of Resistance 2. Blasting dudes through walls with the Auger is never not fun. You always have a seemingly infinite number of options at your disposal during every encounter. I'd often find myself saying "oh, shit, I forgot I had that." There are very few times where it feels like the game is directing you towards a specific piece of equipment, and it's not surprising that's when when the game feels the most limited.

Insomniac appears to have taken a few nods from Valve, as well. When you come across the sniper rifle equivalent, some Chimera start throwing rocks from a distance, each positioned to best show off how this new piece of gunnery would be useful to you. It's showing but not telling, a very Valve trait.

And then there's multiplayer.

Sadly, Resistance 3 does not feature Resistance 2's most inventive multiplayer feature, the co-op campaign. That's been scrapped in favor of a traditional co-op mode programmed into the regular campaign (just make sure to push up the difficulty a notch) and a fairly robust multiplayer mode with a variation on the leveling upgrade path that's become the (increasingly stale) standard since Modern Warfare. Resistance 3's modes aren't offering anything particularly new, but Insomniac's creativity greatly extends to the multiplayer's various unlockable perks. One of my favorites is "Leaper Corpse," which transforms your dead body into three AI-controlled bad little alien dudes. When you've lost a particularly nail biting firefight, unleashing these guys and and nabbing a postmortem kill is particularly satisfying.

It's no surprise the weapons are the star of the show here, and in a world where it's hard to tell the difference between one shooter and the next, simply having combat take on a life of its own is refreshing.

What else? I don't have a 3D TV, but Move works. I played through all of Killzone 3 with a Move controller, so I've put the accessory through its first-person paces before, but I'm over the novelty now. Like Killzone 3, Move shines best here when utilizing weapons requiring precision control, like sniper rifles. During those moments, the controller translates your tiny hand motions into on-screen jittering, forcing you to question why drinking that third cup of coffee was such a good idea in the first place.

There will be more Resistance games, but whether Insomniac works on them is uncertain. It's left the Resistance universe wide open to new stories, and it's too bad Insomniac wasn't willing to even slightly close the book here. With a Vita spin-off coming, people want more Resistance, so they'll get get it.

Thankfully, Insomniac has sent the series off in style. "The best Resistance yet" means something now. 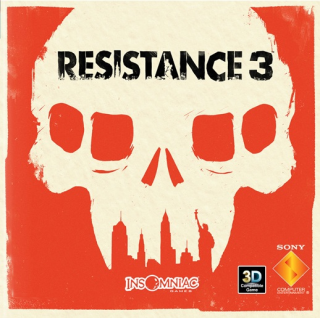 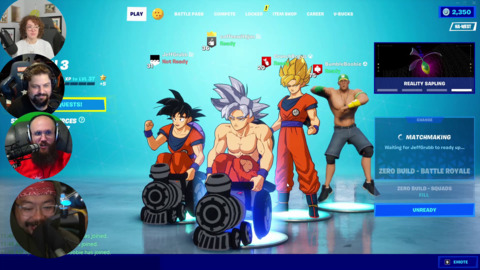 Three Gokus and one John Cena, we are pretty much unstoppable.