by Jeff Gerstmann on May 21, 2008
Share:TwitterFacebookReddit

While there's probably a good way to fit the world of Rocky & Bullwinkle into a WarioWare clone, this game doesn't pull it off.

Rocky & Bullwinkle takes the world of the 1959-1964 cartoon and clumsily crams it into a second-rate WarioWare knockoff. It's not a bad idea, as the large cast of characters and multiple themes bring a number of different frantic and fractured microgames to mind. Well, my mind, anyway. But this Xbox Live Arcade release doesn't capture enough of the look, sound, and feel of the cartoon, making the whole project come off like an unofficial Flash game with shaky control.
There are over 100 microgames, and each one is assigned to a different "show," much the same way different games were assigned to different characters in WarioWare. Here, the shows are based on one character or sub-show from the cartoon, giving you a Bullwinkle set, one for Rocky, one for Boris & Natasha, one for Aesop & Son, and so on. Your first goal is to clear all seven of the main shows. A show gives you a randomly selected batch of games from each set, as well as one boss game. You can fail the main games, lose a life, and continue forward, but you'll have to clear the boss game each time it comes up to proceed. Clearing it gives you an extra life and raises the difficulty up a level, making all of the games a bit more difficult. There are five levels of difficulty in all.
Most of the games are too simple, like a dart-throwing game where all you do is point crosshairs at a dartboard--you don't need to actually throw the dart. But since you're kept on a short time limit, you need to work quickly. That worked in WarioWare, but here, you're shown a screen telling you exactly what game is coming up next and how to control it, and you have to hit A to proceed to the next game. The pause between games prevents Rocky & Bullwinkle from developing any tension at all. Furthermore, some games have unclear controls. Some games want you to press the two trigger buttons, but the game doesn't make it clear if you should pound them as quickly as possible or build up a rhythm between the two buttons. As a result, I ended up having a fair amount of trouble with games using the triggers. The game also has camera support, which make some games use the camera in lieu of the standard controls. So instead of hitting A, you'll jump up and down, and so on. I gave that a shot and quickly gave up because it didn't seem fun or particularly interesting.
As you play, you earn boxtops, which can be used to purchase items, some of which just make it easier to earn more boxtops. Some give you score boosts. The only one that felt useful was a scrooching gun, which adds one more bubble of time to each game's countdown.
The game is bright and colorful, and it occasionally looks pretty good. But sometimes the artwork just doesn't look true to the original characters, and all of the movement is very rough, making the whole game move like a bad Flash cartoon. The audio isn't much better. Only a few vocal samples have been included, and most of the trademark music from the cartoon series isn't here. Instead, there's a bunch of too-smooth music that sounds like someone pressed the "give me something inoffensive" button on a piece of sequencing software. A handful of grainy, small clips of the cartoon are also included, but the only show between games or before you start playing, and there's no sound. They're kind of pointless.
But then, you could say that the entire game is kind of pointless. It's not awful, but it could certainly be a lot better. As a big fan of WarioWare and Bullwinkle, I can totally see how those two concepts could be mashed together, and I can see how people would think it'd result in something exciting. But this $10 Xbox Live Arcade release fails to excite, leaving behind a game with no originality and not much excitement, either.
Jeff Gerstmann on Google+
Load Comments 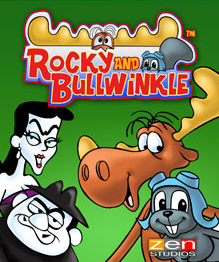