Electronic Arts makes missteps at every turn in this fundamentally flawed follow-up.

When Electronic Arts revived the Star Wars: Battlefront name two years ago, it laid the groundwork for what could have been a successful new take on the series. A new trilogy of films was about to hit theaters and enthusiasm for the brand was at its highest in recent memory. Battlefront’s revival delivered in terms of presentation and fleeting multiplayer fun, but the lack of a substantial progression system or single-player campaign limited the long-term value of the game.

Battlefront II had the potential to make good on its predecessor’s shortcomings. Early in its marketing cycle, EA trumpeted a single-player campaign as a core component of the sequel. If that delivered on the single-player front and progression was improved over the bare-bones star card system of the last game, there was little to keep Battlefront II from being a huge improvement over its predecessor.

It fails on both fronts.

The sub-five hour story makes Call of Duty campaigns seem like nuanced, flexible affairs by comparison. What could have been an interesting, canonical take on the Empire’s activities between Return of the Jedi and The Force Awakens instead feels like a Disney World ride. You’re pointed in the right direction and shuttled along from shootout to shootout. If you feel like exploring your surroundings at all, you’re met with a “return to the mission” countdown the moment you step off the intended path.

When you’re not mindlessly firing at the enemy, the objectives are rote and uninspired. Defend this guy while he activates a terminal. Plant a bomb on this thing. Hey, here’s an on-rails vehicle section. It’s every boring objective you’ve ever played in a shooter campaign, but tossed into a blender with some shiny Star Wars stickers. It all looks great and controls fine, but that does little to remedy the extremely bland moment-to-moment action.

The campaign fails on the narrative front, as well. It introduces us to Iden Versio, a special forces soldier for the Galactic Empire and daughter of a stoic admiral. This being Star Wars, much of the threadbare story revolves around conflicts with her father and the general struggle of good versus evil. While the movies aren’t particularly subtle, everything in Battlefront II’s campaign is as obvious and hamfisted as possible. I won’t spoil explicit details, but major alignment changes happen in a jarring and sudden way that’s never really given enough thought or script time to feel like we should actually care about it.

Its campaign wants to create the illusion of depth. Iden can collect up to eight abilities and four passive boosts, but these are basic tweaks like changing grenade types or improving cooldown times. Certain terminals will allow you to see live security footage of guards, implying that the game has some kind of significant stealth element (it doesn’t). When difficulty spikes pop up, it’s not because the game throws well-crafted encounters at you. Rather, it just brute forces you with tons of enemies.

Iden’s lackluster story isn’t even her own. Despite being less than five hours long, four of the twelve missions are fan service sections that put you in control of series favorites like Luke Skywalker and Han Solo. These may have felt more welcome in a longer, more substantial campaign, but here they feel like cameos that overstay their welcome and distract from what little story there is with Iden.

One of my two hopes for this sequel was dashed by the weak campaign. As disappointing as it is, it’s nowhere near as disastrous and potentially irreparable as the changes EA has made to multiplayer. Instead of expanding upon and improving the weak progression options from the last game, Battlefront II’s star card system excises the joy out of multiplayer.

Star cards are inherently tied to in-game abilities and effectiveness. Passive boosts improve health recovery and reduce incoming damage. Ability cards can grant you improved turrets and shields, increased damage, and new weapons like grenade launchers and homing missiles. These cards are earned by opening loot crates. It takes a while to earn enough in-game currency to open one, and I consistently found myself disappointed by my rewards.

Crates can contain a variety of cards, and each one can apply to a class, a hero/villain character, or a vehicle. More often than not, they unlock insignificant rewards like emotes and victory poses. This feels alright in a game like Overwatch, as your in-game performance isn’t dictated in part by the contents of its loot crates. In Battlefront II, I’m much less excited to unlock a new victory pose for Yoda because that means I received that instead of something that will actually improve my performance.

I kept grinding away at multiplayer, hoping that I’d get cards for my favorite class, hero, or vehicle. After I played enough to buy a loot crate, I’d usually get a paltry amount of credits or an emote for a character or class I never played as. At no point did I feel like I was making any progress towards directly improving anything I use. I’d just grind and grind until I had enough to buy a loot box, then get disappointed by its contents and repeat the cycle again. It feels less like I’m improving my loadouts as I progress and more like I’m killing time between pulls of a bad slot machine that never really pays out.

There is one way to have at least some say in your loadouts, and that’s by crafting and upgrading specific cards that you want. However, this is accomplished by spending crafting materials that are earned through the same loot crate system as everything else. When all of your potential upgrades ultimately come at the whims of randomized loot crates, nothing that you’re doing in-game actually feels like it matters.

At the time of this writing, EA has already made multiple massive changes to how this ill-conceived progression system works. The publisher initially reduced the cost of unlockables by 75%, and eventually (and possibly temporarily) eliminated real money transactions altogether. Neither of these moves have rectified the situation. Battlefront II’s star card and loot box system is fundamentally terrible, and no tweaking to costs—either real money or in-game—can fix it.

It’s a shame, because the foundation of multiplayer isn’t bad. Its primary mode is Galactic Assault, a 40-player, multi-objective battle featuring both on-foot and in-vehicle action. You’ll start as the class of your choosing, and earn battle points by killing enemies and participating in the objectives (which are typically along the lines of “defend this position” or “attack this thing”). As you accumulate battle points, you can cash them in to spawn as various hero characters or vehicles. It’s all perfectly functional and enjoyable multiplayer fare. That said, much of its appeal comes from the fact that it all looks and sounds like Star Wars. Without the license and recognizable faces and places, there really isn’t anything especially innovative or unique in this mode.

Starfighter Assault was my favorite mode. These 24-person space battles place you in the cockpit of various rebel and imperial vehicles and task you with taking out enemies while working towards a larger objective (usually “take down/protect this large spacecraft”). It’s not particularly deep, but dogfighting through asteroid fields and taking apart Star Destroyers bit by bit offered a kind of popcorn fun that temporarily made me forget about the shattered skeleton of Battlefront II’s multiplayer progression.

I’d have fun during these matches, at least until the very end. That’s when the game would spit me back out to the menu, trickle a few credits into my inventory, and I’d remember how little my performance actually matters in the grand scheme of things. Flying around and shooting TIE fighters out of the sky is all well and good, but the thrills don’t last long without some kind of hook or sense of reward to keep you coming back.

This feeling held true with Heroes vs. Villains, a returning mode that can occasionally be fun despite its shallowness. Being able to regularly play as Kylo Ren or Emperor Palpatine is cool, but your efforts will likely reward you with a class emote or two-percent damage increase for your X-Wing or something equally inapplicable to the characters you actually used.

In terms of features, Battlefront II checks most of the boxes you’d want in a big shooter like this. It has a campaign, an assortment of multiplayer modes, a progression system, and basic offline scenarios that you can play solo or with a friend. Once you dive deeper, you realize that it doesn’t matter that these features are all present. Its campaign is as forgettable and formulaic as any shooter campaign in recent years. Its multiplayer modes can occasionally be fun in a vacuum, but any long-term enjoyment is crippled by the star card system.

On paper, this should have been a safe bet for both Electronic Arts and Star Wars fans. EA was bound to sell plenty of copies based purely off of the popularity of the license, and they should have been able to satisfy fans by adding the elements that the last Battlefront lacked. While they did add those elements, the additions were either severely underwhelming or fundamentally broken. The end result feels like a game that was created in a boardroom, its DNA formed by focus testing and market research. Time will tell what EA does in an attempt to remedy its grave errors with Battlefront II, but the game as it stands today is little more than a disappointing mess. Its technical prowess, beloved characters, and shiny spacecraft serve as little more than a distracting facade that covers an embarrassing attempt at a marquee Star Wars game. 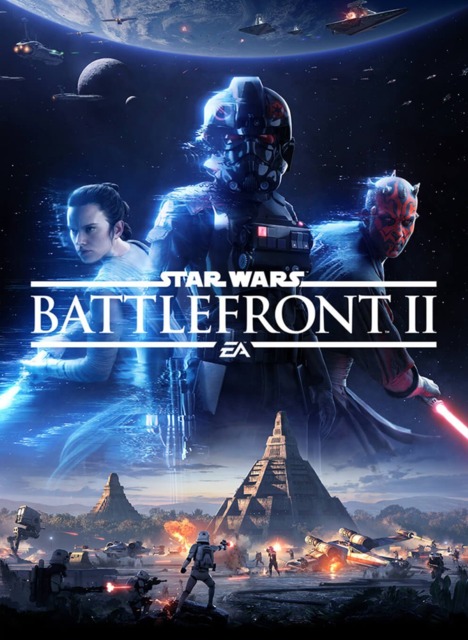