by Jeff Gerstmann on June 30, 2009
Share:TwitterFacebookReddit

The Conduit checks most of the boxes on a first-person shooter features list, but it comes together in a very bland way.


The Conduit is slow-moving first-person shooter with a flat story and dull enemies. Considering first-person shooters seem to be getting released at the rate of one or two a month, you'd think there wouldn't be room for a game that doesn't come close to meeting the standards of the genre. But The Conduit carves out a decent niche by being one of the few games that take place from this perspective and were developed solely for the Wii. As a Wii-only release, The Conduit is kind of neat and certainly unique. But it's more interesting for the way it uses a Wii Remote and Nunchuk than it is as an actual game.

The game's story is your typical alien-filled and shadowy government conspiracy that doesn't really go anywhere. All you really need to know is that the bug-like alien troops come out of glowing portals called conduits. So a lot of the gameplay tasks you with fighting your way up to a conduit, and then shutting it with a grenade. You'll also have to pull out the all-seeing eye, a glowing orb that acts as your primary way to interact with computers and as a beam that reveals hidden objects in the world. Sometimes you'll use this to unlock doors that block your forward progress. Other times, you'll use it to open up secret pathways to additional weaponry, disarm normally invisible mines, and so on.

You can hold two weapons at once, and you'll encounter weapons from different factions, including secret high-tech energy weapons, alien rifles, and regular human technology. You'll also grab a lot of grenades... seriously, sometimes it seems like every single enemy has a grenade on their corpse. You toss grenades by shaking the Nunchuk, which isn't always as responsive as you'd want.

Playing The Conduit requires a Wii Remote and a Nunchuk. The control is pretty intuitive, but it takes time to get used to aiming and turning by pointing at the screen. I probably fumbled around with the aiming control for around half an hour before I started getting comfortable. The game offers a lot of different sliders and options for tweaking the control, but I ended up leaving it alone in the end. The more I changed things, the worse the control felt. But even once you get the hang of the controls, it all feels a little delicate. The lock-on targeting jerks your view around, which can be disorienting. The turning radius never feels quite right and makes the game seem sluggish. In fact, all of the movement feels deliberately slower than the average shooter. But the game seems like it was built with that in mind, as it's a fairly low-impact experience overall. The instances where it gets more hectic quickly became my least favorite parts of the game, since that's when the game's control wasn't up to the task at hand.

Overall, the campaign is short and uneventful, with plenty of repetitive moments and enough atrocious voice acting to make you almost glad that it's not particularly long. It's backed up by some decent multiplayer that comes in deathmatch, team deathmatch, and a capture the flag variant where players attempt to capture the ASE. While the control sort of got in my way here from time to time, there's really nothing else quite like it on the Wii. Heck, it even has support for the WiiSpeak peripheral, which hasn't seen any use since it was released alongside Animal Crossing: City Folk. Unfortunately, you'll have to exchange friend codes with other people who own a WiiSpeak if you actually want to use it, as it's disabled in games with random opponents. But if you've been following the way Nintendo rolls with its online feature set, that probably won't come as much of a surprise.

It has a generic look to it, but The Conduit doesn't look bad. The environments can get sort of large, and the areas are detailed well enough. You'll probably notice that those environments aren't destructible, and the enemy design is kind of lame. It also maintains a good, smooth frame rate throughout.

If you're just comparing it to other action games released on the Wii, The Conduit does some interesting things with its control and with its multiplayer modes. But other aspects, like the poor story, bland design, and awful voice acting, would be just as bad on any platform. It's that stuff that drags The Conduit down into an area where it's tough to recommend without providing a boatload of caveats.
Jeff Gerstmann on Google+
Load Comments 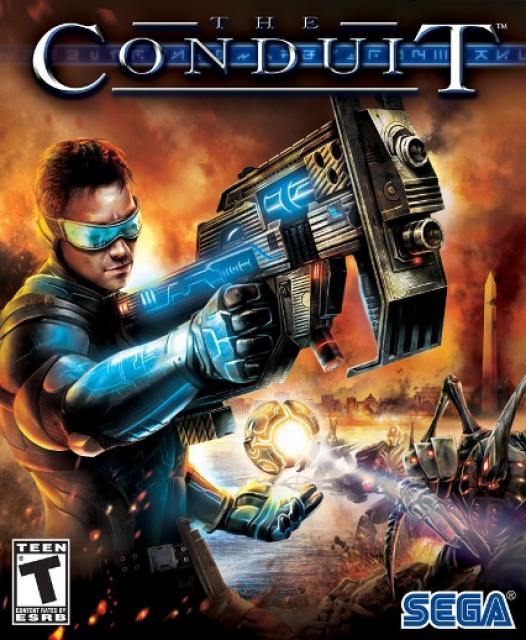