Alright, trying my hand at something new here: game reviews. I think it would be fun to eventually do these as a video review/show thing, but for now this will be good. Now onto the actual game. Burnout Paradise is the fifth game in the Burnout series and it introduces a new, open world that has previously been used by EA in their Need for Speed games. It is also the first game in the series to be developed specifically for this generation of consoles. Along with the generation jump comes the typical smattering of graphical and audio upgrades but you really need to look at Burnout as something more than just a next gen racing game. 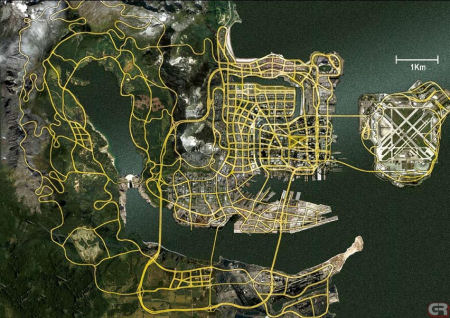 To begin, we have the brand new open world that I mentioned. This is a huge improvement to the Burnout formula and fits the game perfectly. The feeling of just driving at extreme speeds just for exploration sake is amazing. And believe me, there is plenty to explore. According to the case there are 250 miles of roads. Mapquest says that's a little more than the distance from my house (in central Maine) to Boston, Mass. At normal speeds that would take 4 HOURS to drive. But this is Burnout and you are by no means traveling at normal speeds. The amazing part is that you will want to explore all of those miles of road. As an added challenge/bonus there is a Showtime(I'll get into that later) and time score for each road, called Road Rules that you can set and compete with people on. Then there is the new race system to go with this free world. You may have heard that there is an event at every stop light? They weren't kidding. There are 110 events(Road Rules not included). That's gonna keep me occupied for a while. Oh and did I mention that the races don't have set courses? All a race is in this game is a starting point and ending point. Everything else is up to you. Unfortunately, this brings out one of the game's glaring flaws. The navigation system sucks. sure you can peek at the map, but that takes your eyes off the road often causing a crash. Then there is the compass. Yeah right. That thing tells you only the most obvious routes and even then it tells you where to turn way too late, making you need to use the e-brake and spin out. Some may see this as a good challenge, but I see it as annoying. Don't get me wrong, I love the free race set up, just not the nav system.

Next we have the graphical and audio upgrades mentioned before. The graphics are fairly good with a nicely detailed city, decent cars, and pretty scenery(if you bother to look at it at 200 mph). The real graphical upgrade is the crash effects. Every time you crash the camera will change angle and go into slow mo, showing you every wrinkle in the metal, every scrap that brakes off, and generally a perfect crash. And that's what Burnout is all about right? The sound that accompanies every crash is equally amazing. You hear and crinkle and...tinkle? Anyways, ignoring my vocabulary, The music for the game is sweet as well. I never got why people dislike EA Trax. Just be prepared to hear the song "Paradise City" by Guns and Roses a lot. Not that it's a bad song, it's just there a lot. The fun part is that you get plenty of old Burnout songs I enjoyed a lot. The last element to Burnout's sound is the ever present and often interesting DJ Atomica of Crash FM. You may know him if you played SSX Blur on the Wii from his duty on Radio Big. He's even better this time. From giving you usually helpful tips to doing the typical DJ chat thing everything is spot on. He is also the "author" of the news updates in the game, so that just helps extend his personality and immerse you that much more.

There are many new game modes in Burnout Paradise as well. First off, there is an omission from past games. Crash mode is gone. Sad right? Not quite when you consider that they replaced it with the new Showtime mode. This is essentially crash mode, but you activate it whenever you want by pressing both bumper buttons at once. Then you get to see the glory of that crash that you control. The objective is simple, just cause as much damage as possible before running out of your boost. Yes, that above picture is exactly what you do in Showtime mode. I personally like it much better than the old Crash mode since it still keeps you in the open world, meaning your crash can span the city, and you can actually control the crash. Hooray for destruction. All of the sweet old modes from past games in the series are back as well. There is one new mode however. The Stunt Mode is also pretty sweet. The objective is to simply string together as many stunts as possible, raking in the points the whole way. Sure, it's not much of a challenge, but the thrill of flying around the city spinning around and such is perfect. The only downside is once you crash it's very frustrating. You just loose your groove. I suppose that's how it should be.

Finally, we have the new online mode for Burnout Paradise. I can easily say that this is my favorite feature of the game. First off how simple is it to get online? Press right on the d-pad. Press down a few times. Press right again a few times. Congratulations, you're online in a freeburn with up to 8 people. Oh, and there was no loading at all, you still free roam the city from where ever you were, and I have yet to experience lag on my DSL connection. And what can you do once you're online? Well you can drive around with your friends (or take them out) and enjoy the city. When you do take someone out that has a Live Vision camera you get a mugshot of the fool that dared take you on. Of course the same happens on you if you have the camera as well. That's just for boasting reasons though. There are also the basic ranked and player races that you can do much like any other racer in the world. The true beauty of the online is that there are even more events to do. Yes, aside from the 110 offline races, there are well over 300 online challenges. The fun part is that most of them are co-op in some way, so you are forced to work with the very people that you have been trying to destroy. The challenges can range from something like finding a smash billboard to just hitting boost for a certain amount of time, or jumping off a parking garage and landing on another rooftop. It could be anything. This is the kind of thing that keeps you playing games for a long time. To keep that kind of replay value, there are also 400 smash gates, about 120 billboards, many super jumps, and 35 findable drive-thrus. Essentially, it's the perfect blend of competition and co-op inside an insane racing game.

Overall, this game is a definite buy. Buy it. You will enjoy it whether you enjoy racing, destruction, or socializing online with people. It's not perfect, but it is surely the best Burnout game and probably one of the best racing games I have seen. Plus, it gives you a reason to have a Vision camera aside from Uno. So what's my score? A very resounding 9/10.
Load Comments

Other reviews for Burnout Paradise (Xbox 360)

Paradise City is filled with things to do.Burnout Paradise takes a huge leap in innovation from the previous Burnout titles. As a gamer who isn't incredibly interested in racing games (besides the occasional Mario Kart), I was naturally skeptical about Burnout Paradise. But, after seeing it for $20 as a Platinum Hits title at GameStop, I decided to buy it. I do not regret that decision.Burnout Paradise is a unique racing game. After selecting a car and fixing it up, you are free to go wherever y...

The Burnout series is the only set of racing games that I've ever really been able to stomach, and that is for a few reasons.  One being the fact that the game is as much (if not more) about wrecking stuff and causing destruction as it is about racing, and the other main reason is that it doesn't do that crap about making it feel more like the "real world" by making you manage money and repair and buy your own cars.  This game not only doesn't punish you for bustin' up your own set of wheels...

Add new review * Read the most helpful review by starfoxa