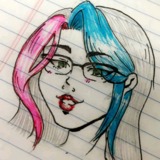 Insert witty comment about how Destiny, a game I sunk hundreds of hours into, is actually a terrible game made by a bunch of nitwits at Bungie. And about how this might actually be a GOOD Destiny, even though they basically fixed most of the problems with the first game with the release of the DLC and Destiny 2 is shaping up to be more of the same but better. Heres hoping that the same company that brought us such amazing, award winning classics like Mass Effect: 3 and Mass Effect: Andromeda dont drop the ball like Bungie did with Destiny.

You got us! We're all owned now!

@stordoff It's a little late, but hello! It's me, your local politically educated trans girl, ready to make one post and then disappear again! I'm here to say that yes, Man-In-A-Dress gags are still scorchingly transmisogynistic, especially considering that this one is a good ol' classic Muscle Tranny one. The "masculine" aspects of the character model(jawline, shoulder width, limb width and muscle density, etc) are above and beyond any of the others in the game for the sole purpose of juxtaposing the dress and the long hair, classic symbols of traditional femininity. They clash on purpose, to make the character seem like a freak for acting like a girl when they are presented to the audience as physically not being a girl. Some nice homophobia on display with the character, as well, mostly through equating femininity to attraction towards men and being another queer coded villain... something that can be found in several other places in this game. (Please count the number of IM NOT GAY BRO comments that this game makes )

Not really too terribly surprising to find it here given Japan's long history as a traditionally patriarchal society with extremely conservative political leanings and a near-complete lack of understanding or acceptance for anyone falling under the LGBT+ initialism. And yet, despite a lot of the weird shit in this game that makes me go "urggghhhghhhh" and the way it legitimately does not seem to see women as actual human beings with agency that can exist outside of the sexual fantasies of men.. I can't stop playing it and enjoying it. It's good as hell.

Hoping that Bioware can pull this off and Anthem is the Good Destiny because lord knows Bungie can’t make that one.

I wonder who will they bring in to replace Dan.

After giving it some thought overnight, I've updated my list!

Also, I wonder how Bungie feels about 343 retconning this much? "Spartans have to be engineered from birth." "Oh, Buck? Yeah, he became a Spartan in about three years, no problem." And that's just the tip of the iceberg. I don't think the Halo lore is some amazing thing, but I did really enjoy the premise. But they've gone so far off the rails; the early books added so much absurd tripe, and they've just built on it since.

I mean, the Spartan IIs have always been the best. Even in Bungie's lore the Spartan IIIs were referred to as "Shake and bake Spartans" in a very derogatory way by everyone that knew a Spartan II but especially the IIs themselves.

It's also always been a real point of discussion in the lore and a big theme of some of the games themselves; the meaning of what it means to actually be a Spartan, the ethics involved with kidnapping children even with the results it provides compared to every single other way Spartans have been made and how the process of becoming a Spartan connects one and disconnects one simultaneously from their humanity and the humanity of those they're meant to protect. It's shaping up to be a big part of this game's story.

For 4 videogame series now, some people keep begging Drew to play a certain way. Yet Drew and Dan play the way they want, and we need to accept that. Trying to persuade Drew to play different is a futile enterprise, you might as well yell at the wall.

It's more Dan plays like an idiot and ends up forcing his way of playing onto Drew and makes the whole experience much more difficult than it needs to be. Drew listens to Dan WAY too much and he ends up just murdering everyone and causing alerts every episode instead of experimenting as these games want you to, ESPECIALLY this one.