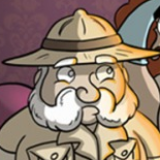 Got quoted in a necro reply from a first-time user reviving a 4-year-old thread. I can die happy now.

Looking down the rabbit hole...

Do I dare to go further?

Only time will tell.

my game isn't really that dark; youtube is just weird. It's Metro 2033 if you're wondering

@AjayRaz in response to A Simple Blog:

Thank you! I'm here till Thursday.

How do I know this? King of the Monsters 2: The Next Thing said so.

Okay, so it told me that because I was able to get through the tedium of beating about 37 bosses that all cheat at grappling, but still.

I am the King of the Monsters. I beat the invaders from another star. Now, I am the strongest.

No one can take that away from me.
3 Comments

I found this to be hilarious

Behold Facade, an independent freeware game released in 2005. You play some person who is thrust into the middle of your close friends' troubled marriage. You can walk around and attempt to talk to them.

This should be where I say something interesting about the game's ambitions with interactive storytelling and making the player feel involved, but I'm a lazy bastard and I need to go play some more games, because I haven't all week. So here's some dude playing it in a manner far more entertaining than I can:

All fathomable variations of my name that don't include a number (and yes, I tried incorporating periods, even in the middle of my first and last name, and apparently people saw fit to take that as well) are taken on Gmail. How can I make a semi-professional email address now?!?!

I have an .edu email, but it can't attach files larger than 5MB and it also has numbers, because apparently no less than 88 people with my first initial/last name attended this school before me.

Now for my own quiet decision.

On the one hand, I feel like I have spent enough time on Quick Looks alone that I owe Whiskey Media and company a decent amount of money.

On the other hand, I wouldn't really use the features, except maybe downloadable videos because my internet is slow. I'd mostly be buying for the T-shirt and supporting Whiskey.

I'll be honest; aside from some charity donations here and there I haven't given money to something I support just for the sake of supporting it. "Should I start now?" I ask myself. Maybe it'll feel good, unlike buying a new video card to realize that it is in fact the CPU that is making TF2 run slowly.

I guess I'll make a choice by the 10am PDT "deadline."

Are you Man Enough?

Big and bad enough?
Are you gonna let 'em shoot you down?

I wish there was more information available about Man Enough. I would totally try to get 1000 wiki points in it, if only I knew about the damn game.

Blogs Created:
29 blogs
Most Commented blog:
Will Special Editions with DLC re-release be common from now on?
Total Comments on blogs:
92 comments