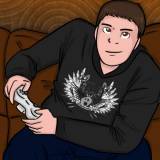 Why five and not ten? Well, when I sat down and thought about it, there weren't ten games I could think of that blew me away. Sure, I had fun playing plenty of games this year, but only these five really stood out to me as great.
1 Comments

Got NFS: Most Wanted early. My Impressions (Video)

Here's a basic breakdown of the single player elements and my first impressions on the game as a whole.

Since I started on YouTube doing a let's play of Minecraft long ago, I decided it would be appropriate to let you guys know my thoughts on this version. How is it? What is it missing? Is it worth buying? Here's what I have to say.

While live streaming some Trials Evolution the other night, my friend Paden get preeeeeeeetty angry. He cursed, he insulted, he ranted. It was hilarious.

Plenty of New Videos Up!

I haven't bothered posting here in awhile but my YouTube channel (CraigAA1028) has been doing well. Here are some of my most recent videos:

My Video Review of The Darkness II

My video review of The Darkness II on Xbox360. I'd appreciate likes, comments, and subscriptions if you enjoy it. If you have criticisms, let me know. Thanks everyone.

Link to My Other Video Reviews

The other day, I decided to finish off Dark Souls while streaming live, a game I had previously put over 50 hours into, but had yet to reach the conclusion of. Guess how many times one can die in a single five hour session? Watch to find out.

Please note that since I was streaming the game live, there is a slight delay between what I'm commenting on and what happens on screen. Basically, I react to things a second before they are shown.

There is quite alot of cursing in this video, though I'm sure any Dark Souls player can understand why. Hopefully you find my frustration entertaining.

Join me as I start of 2012 with a let's play of a game that is often regarded as one of the scariest games of all time, Fatal Frame 2: Crimson Butterfly, as voted for by the viewers. This is the Xbox version, aka Director's Cut, so I'll be playing in the added First-Person mode.

My plan is to release 1-2 parts a day. Hope you enjoy guys.

My video review of Halo: CE Anniversary on Xbox360. I'd appreciate likes, comments, and subscriptions if you enjoy it. Note that I don't have a great quality microphone. If you have criticisms, let me know. Thanks everyone.

Link to Other Video Reviews