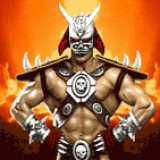 There isn't too much that needs to be said that hasn't already been said about the bizarre decisions made by the developers of FFXIV, but I thought I'd just say, from the standpoint of a nearly 7 year veteran of FFXI, I cannot believe how much of a step backwards this game ended up being.

I purchased the collector's edition, and did the Alpha and Beta tests, expecting that if there was anything the matter, it'd be addressed before retail.  But it seems as if the game is just a tremendous "FU" to all they learned from FFXI, and a return to the mentality of "We are doing this game OUR way, and that's all there is to it."

I have already decided to not continue in FFXIV.  Unless there is some kind of a major overhaul to the game to make it at least SEEM player friendly in some regard, I probably will never reactivate.

I guess it's back to FFXI I go.

It really makes my head hurt just how many of these I have played over the past few years, and now, being in the process of adding all their information to the Giant Bomb, is bringing back the memories.

Super stoked to see the site has launched, and love the layout and the ability to edit things freely-ish. Looks as though I have found my new gaming home.