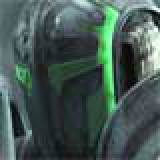 And I'm really upset with it. I was on my way home from working for the Census in a town called Richfield. It was about 8:45 at night, and it was dark. Obviously. Anyway, I was going 57 in a 55 zone, and an oncoming car flashed its lights at me. My first thought was to check to make sure my highbeams were off. By the time I looked up from my glance at the dash, there was a dog in the middle of the lane. I think it was a yellow Lab, but I'm not sure because I didn't see it for very long before I slammed into it. I didn't even have time for my reactions to jerk the wheel to the side, not that there was much room before going down over an embankment and into a field, but by the time I had started swerving, I was already past the dog. I thought I hit it right in the middle of the chest with the corner of the driver's side of my car, but when I got out of my car, I saw it staggering down the road; at least one of the hind legs was broken.

I had my hazard lights on, and I noticed that the road wasn't lit in one place, and evidently, the dog took out the turn signal and broke some of the grill. However, I'm not really that concerned with it. I feel really bad for the dog. I went up the road a bit and pulled off at a convenience store. From there, I called 911, talked to them, and then talked to the police. Then I called my supervisor for the Census to let him know. Tonight yet, I have to write up a report for the Census, since I was on-duty when I hit the animal. The officer who showed up told me that it wasn't really an incident that required a report as there were no humans injured and my car was driveable under its own power.

It could have been worse, but I'm still pretty shaken about the whole thing.

Working for the Census Again

I've really been trying to look for another job at the hospital. Part of the reason is that I'm tired of the general public. It's hard to believe how stupid the majority of people are until you actually deal with the general public. Added to that is the huge amount of responsibility that is part of the Switchboard. Fire alarms, boiler alarms, cardiac arrest notifications, violence alerts, and so forth all come through the Switchboard, and I have to relay them to the proper people. It's very possible that someone could die if I screwed something up. All of this responsibility, and I get paid $9.94 an hour. The whole hospital just got a $0.34 raise a couple of weeks ago. The wage isn't that bad, but for the amount of responsibility, it's incredibly low. The people who work in Dietary making meals actually make more than me because they're in the union. Add to that the fact that I'm only part-time, which means I either get health insurance or a paycheck. And with student loans at $660 a month, there isn't much of a choice to make.

So, a couple of weeks ago, I applied to a receptionist position in the Center for Behavioral Health, which is full-time. I could finally get health insurance and get the labs and bloodwork done that I was supposed to have had about a year ago. High cholestoral, hyperparathyroidism, high calcium levels, family history of lots of bad things, and so forth. And the hours are from 8:30 am to 5:00 pm, which isn't buttcrack of dawn early. They just finished with their interviewing Friday, so I should be hearing from them before long.

I also applied to a full-time Housekeeping job. Which is horribly depressing. I applied to a job to pick up trash and wash toilets, despite the fact that I have a bachelor's degree from Bucknell University. The bad thing is that because it's union, the wage there is more than what I'm getting now. And, the job will be hard as hell. Seven hours of constant walking a day, with two fifteen minute breaks and a half-hour lunch.

However, Thursday, I got a phone call from the Census Buearu. Apparently, they would like me to work for them again, albeit in a different department or something. So, I'm going to be staying down in York, PA from Sunday night through Wednesday night, and they'll be paying for the motel and part of the meal expenses. I could have driven it, but it's two hours each way, which would have been awesome overtime since the base pay is $11 something, plus $0.50 a mile. It's only two to three weeks of work, which would be great to get some extra income but not too much to get annoying again. And they only require a minimum of twenty hours a week. Which means that I can do both jobs without either one being negatively effected.

This morning here I have a job interview at 9:00. I've been working part-time at Switchboard since the middle of December, but I've been keeping an eye open on what else might be opening up. I put a job bid in for down at the Center for Behavioral Health as a receptionist/secretary. It's not the most glamorous of jobs, but it's full-time. Hours should be 8:30 to 5:00, five days a week with no weekends. Which is a far cry from what I'm doing now, where this week I might work all three shifts for a total of five days, and then next week have my minimum of two days.

I have mixed feelings about it. For a while, I didn't bother looking for another job, because I felt I owed it to Switchboard to not leave while I worked off some of the time they had invested in training me. However, after seven months, I want out. The job isn't all bad. On third shift, I used to read about 400 or 500 pages in a book a night, and still getting my work done. I'm just tired of the people I have to talk to. The patients and family members, while extremely frustrating, I can handle for hte most part. I understand that they have a lot of stress. However, when there are certain doctors that treat the dirt they walk on better than me, I have issues with that. If I were to talk to the doctors the way they talk to me, I would be out of a job posthaste.

I've had the interview set up for almost a week now, and I'm really hoping that I get it. I want out of my current job extremely bad. I hate the thought of going to work with every fiber of my being some days. Today isn't as bad, because I'm working down in the mailroom instead of at the switchboard. Working in the mailroom is a bit tough due to the rapid pace at times, but it's much more laid-back, and I can talk to employees when they come in to pick up or drop off mail.

Anyway, time to get showered and dressed. Wish me luck!!

Flight of the Wasp

Friday was a strange day. I was sitting on the couch, watching television and eating my lunch. I felt something jagging me in the lower back, so I took my left hand and brushed behind me. Pain blossomed in my finger, and I leapt up from the couch. I looked at the couch, but I didn't see anything. I ran into the bathroom to take a look at my finger and my back. I wasn't quite sure what it was until I went back out to the living room and saw a wasp wandering around between the couch and the windows.

From what we can figure, the sucker was actually chewing on my back, which is why it felt like jagging and not a sting. When I stuck my hand back there, he did sting me. My back has a welt with a diameter of about seven inches. And there's a big hole, which fits with the idea of him chewing. Luckily, with some baking soda and water, my finger wasn't too bad by the time I had to go to work at three.

My side is a little sore, but my finger is completely better. I'm just glad that I'm not allergic. However, I guess I deserved the whole thing. The night before, my mother (who is very allergic) pointed out the bee, but he was too high for any of us to do anything about it. I had kind of made fun of her, so I got my due reward, I guess.

I don't know if anyone is interested, but I use a service called Glyde. I really like it, and so far, I've started making some money off of it. You can buy and sell games, books, dvds, cds. Right now, they are doing a membership reward-type thing. If you sign up through my link here, I get some credit for you to sign up. If anyone is interested, please check it out. If anyone has any questions, let me know, and I'll try to answer them.

Now that the Steam sale is official and completely over, I have to have an updated list of all of the games that I got. I spent far too much money, but the prices were too cheap to pass up for so many games. And I started trying out some indie games, and I'm rather impressed with some of them. Anyway, here is the whole list of games that I added to my Steam collection.

Awesome! Steam just started their summer sale. I'm assuming it's an annual thing, but this is the first summer I've been on Steam. And I totally picked up some awesome games at some awesome prices.

Ironically, I can't play most of these games on my current PC, but I'm considering these an investment in my future. I'm definitely looking forward to the rest of the sale. I highly recommend checking it out.

The Sword of Truth

With all of the work I've been picking up, mainly second and third shifts, I decided that I could and should start rereading The Sword of Truth series. It's a great series that I had read most of before, but when I found out that there were only going to be a few new books, I held off, waiting so that I could read them all in one shot.

And, now, that time has come. I started reading the first book last night at work, and I'm already halfway through the 800-page beast. Terry Goodkind is a great, awesome writer.

And, looking at the wiki, evidently, there is going to be another book about the characters. Four years after the last book was published...

Blogs Created:
12 blogs
Most Commented blog:
I Hit a Dog With My Car....
Total Comments on blogs:
13 comments