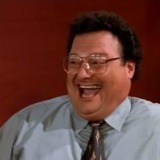 I suggest you guys do something or nothing.

I much prefer the couch :/

My real worry is whether or not they’ve recorded enough dialogue for Spidey. I can already envision fighting bad guy group #143 and hearing the same “sleep tight” or “let me take that- you might hurt yourself!” or “you guys all picked the same outfit? How embarrassing! Let’s go to the police station so you can change.” or whatever other generic Spider-Man sounding lines over and over and over.

You don’t ever hafta change your schedule after that, but you’re screwing yourself if you wait.

@redhotchilimist: You didn’t ask for the opinion of a not-at-all-expert, but I’ll spout my nonsense anyhow:

I’m guessing is that in order for Kai to even be able to exist, they needed scenes to flow faster (obviously), but didn’t always have the frames or shots necessary to do so, so they just drew new ones. Bad new ones.

If they would watch six episodes just ONE TIME, then go back to their usual five, then they’d consistently hit the very best chunks of episodes every time, along with the best cliffhangers. It’s a teensy bit maddening how close they are to being dead on the mark.

I know everyone bitches, moans, and whines about the way they watch the show, but seriously, a lot of the momentum is killed because, as it stands, the hypest shit always happens as the first episode of a session.

LP3 is admittedly pretty bad, but LP1 and LP2? Those games are the tits. You can combine mechs and shoot a black hole gun and grapple hook onto giant bugs and get eaten by a big salamander and shoot it from the inside and make Wesker do kawaii-as-hell poses while hitting guys with a flaming sword that turns into an assault rifle before firing a train’s massive railgun so hard the entire thing starts to fly because you need to kill a miles-long super duper bug-thing that’ll eat the planet.

Anybody who doesn’t like that is an unnoteworthy person.

There is a 4% chance they pull this off. Dooming the entire planet is basically inevitable, and I am excited to see which commander is forced to pull the plug on X- COM. The poor decisions are starting to snowball. I suspect a minimum of 3 squad deaths next episode.