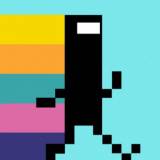 I'm afraid of the App Store

Got my iPod Touch 4th Gen two days ago, very impressed with it. It's also my first experience with the App Store, as my previous iPod Classic couldn't utilise them. In those two days I've chalked up around £15 on apps. I'm pretty careful with cash and I'd never go silly on spending, but the quantity, variety, and availability (being able to buy anywhere if you're on a wi-fi network) is quite scary. Nevertheless, enjoying very much. The bulk of that £15-ish sum consists of Guitar ToolKit, Puzzle Agent, and Broken Sword Director's Cut, and I also bought a trio of 59p apps (DoodleJump, Super Mega Worm, and Angry Birds).

... is how I would describe my reaction to Puzzle Quest 2. Since picking it up on Wednesday I've put some time into it, and although I've enjoyed it, there are a lot of little things which detract from the experience. I've submitted a review here if you so wish, but brief thoughts:

Inventory management. I don't understand why everything is so crammed together. Having both the inventory and equipment select screen together has its benefits I'm sure, but it's not very easy if you want to quickly see which items you're carrying, their stats, etc. Rather than having a list with item name and stats displayed, they are represented by small icons and you have to hit Y for a small stats box to pop up if you want to compare. Splitting into two screens and having a more user-friendly inventory would have been so much better.

The environments. They have grown on me slightly - I do love the look and the quest tracker keeps you on the right path, but it still slows proceedings down and takes you away from the battling. It used to be select location, small text description of your foe, and into battle. I can see the idea behind it, and it does make it look and feel more like an RPG than a casual puzzler, but my feeling is this is an area where they have struggled to combine the genres effectively.

Mini-games. I wasn't too keen on them in the first game, and now they're more frequent (open door, loot a chest, pick a lock - all excuses for a mini-game). Some people might appreciate the variation, but they aren't distinct enough from each other for me to get much enjoyment.

That's about it for Puzzle Quest 2 thoughts, I've basically hit the same sort of issues with a bit more depth in the review. A game with a good concept that still works, but rough in a few areas.

Title is two-fold in referring to my university education and E3. Graduated with a 2:1 degree (B grade), and it looks as though I have a job lined up (not degree level of course); finally something to put on the CV. Degree, job (hopefully): real life apparently...

But to more interesting things... the GiantBomb E3 podcasts/streams were hilarious, love it. Quick general thoughts:

The New 360. A bit funny looking, but the expanded memory and built-in wi-fi are nice features. Not nearly enough for me to invest out right, but to replace a failured box or for an extra, I could be tempted.

Motion control. The Metal Gear watermelon shennanigans (Metal Gear Rising, or Uprising?; don't recall the exact title) was fun, and the actual in-level footage that was shown looked mighty impressive. On the other hand, the difficulty with the Zelda stage demo was a little discouraging (although that seemed to be an isolated incident). Still, the way that enemies change their block (and hence force you to change your attack) could be cool.

3D. I still don't care, but many skeptics seem to have had their stances changed by what was on show. Even if it doesn't interest me greatly, I hope it turns out well.

The games. I'm a bit behind in this area (hence why I'm going to run through the archive), but a couple of things caught me. The two XBLA summer titles, Limbo and Castlevania: Harmony of Despair, looks fantastic. The latter in particular looks great and has a bit of a twist on the typical Castlevania formula (and multiplayer!). Add to that Kirby's Epic Yarn, which has an art style I absolutely love.

Music games. I've been out of Rock Band/Guitar Hero for a couple of years and I've built up some competance on the real guitar; the direction the genre is going in is interesting, and I'd very much like to try out the "pro" modes of these games. Only question is how the note highway is displayed in these modes, or even if it will be replaced by something different.

That's all. Quick thoughts on the World Cup so far: slow start, getting better. I'm not English, but I have some sympathy with their fans and players regarding the press madness that inevitably follows. I don't really care who wins, as long as we're treated to some good football.

Signed up for GiantBomb at launch, but didn't stick with it. I got into listening to the BombCast, though, and figured I'd take a look around the site again. Have to say, the quests and wiki-editing are quite addictive. Had a lot of fun adding information about obscure games and characters I've played, half for the sake of adding and half for the sake of quests. Anyway, it's fun. I've not spent time on a gaming website since GameSpot lost its magic for me. Don't know if GiantBomb will end up being a temporary fill or a more long-term online abode, but I'm here for now and enjoying it.