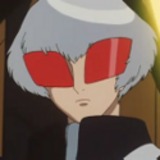 Yajirobe drops into the back of Z more than any other of the B-crew for sure. Krillin/Tien/Yamcha still get a fair bit of play but after this Saga, Yajirobe is pretty much gone.

Never forget what Toriyama did to our girl Launch. She was part of the main Dragon Ball cast for about as long as Krillin. Cutting out filler in OG DBZ. She gets one mention by name and that's it. At least Yajirobe get's to show up anytime they need senzu beans after this.

Think of the amount of gags Toriyama could have wrought from the fact Launch can basically go super saiyan.

I would pay almost any amount of of money to see Vegeta and Launch meet.

Over the years this game has grown on me a lot.

Look Final Fantasy X is my favorite FF game for many about all of the same reason you have given in your blog. My original opinion was much like your own.

I think the big core thing that has changed for me is that I now completely buy Yuna's character progression between the games now.

One thing that helped me to accept it was by finally playing these games with the Japanese VO. I found that in X English Yuna was a quiet reserved timid girl who was driven to defeat Sin out of duty and selflessness. In the Japanese VO, she came off much more like an average girl and her quiet reserved nature was part of playing her role rather than intrinsic a part of her. Like if she wasn't the daughter of the high summoner, she would be much closer to Rikku in personality,

The other factor was finally seeing the Eternal Calm cutscene that they released with the international version of X. This cutscene was apparently made before they had any intention of making X-2. It sets up Yuna motivation to become a sphere hunter. It shows that she has been constantly badgered by both factions to give them her official endorsement or for her to lead Spira herself. She was not willing to accept that responsibly feeling she did enough ridding the world of Sin. So then Rikku shows up with a sphere actual Tidus in the original pre-sequel plans with the same clothes and everything and says "hey you want to fuck off to the sky with me and find your boyfriend?" She was already primed to just run away from it all and now had a perfect excuse of course she hopped on it. Tossing aside her habit for some booty shorts while drastic at least they gave sufficient character motivation for it.

I also appreciate the gameplay of this game much more now than I did back then. FFXIII is what changed my mind about it. Because I love XIII's combat it is solidly my second favorite in the series after X.

Everything about XIII seems like they knew they were on to something with X-2's combat. So they took 6 years polishing every rough edge out of the system as they could and designing an entire game from the ground up in service of that combat system. It removes the redundancy of the dress sphere by distilling them into roles and gives each role a specific use that all remain useful and never get obsolete.

XIII-2 also adds a lot of retrospective fascination to X-2. XIII-2 just loosens up everything XIII did back to its X-2 origins. The game structure is exactly the same here's a bunch of side missions if you visit locations off the beaten path. This time they take the tact of not having any of the main cast return as main cast members. Instead you get to be the previous character motivation device and Paine 2.0. Also they bring back that 'fantastic' monster collection system of X-2 international but now as a main unavoidable mechanic. In a lot of ways XIII-2 makes X-2 look amazing in comparison.

Having said all that I don't think X-2 is a good game by any means. It's now at least the best -2 two in the series. I can totally accept it existence now as a follow up to FFX. Did it need to exist? No. Was it extremely rushed and came out half baked as a cash grab? Yes. Was there any merit to it? Yes. It even managed to spawn it's own legacy divorced from the X name in the forms of the XIII series. It's totally an ok Final Fantasy above bad Final Fantasy like FFII and FFXV.

That's maybe the actually weirdest thing about Kingdom Hearts. Is that for the English voice cast they get a lot of American actors from the Disney side of this union. Before this is years before the boom of 3D animated film getting voice actors to do VO. Before they really figured out how to get actors to translate. Also this anime dialogue so adds to the weirdness.

Some examples of the actors they got for this.

Sora is Haley Joel Osment around his peak.

Kairi is Hayden Panettiere back when she was doing Disney channel movies before she was the cheerleader in Heroes and whatever that country music drama show.

They got Billy Zane for the main villain in this game and he is great.

Also they get many of the original voice actors for the Disney characters.

@paulunga: It actually still looks like it is still pretty close to 0.2 Birth By Sleep's system which I found to be a pretty good step back from the invincible spam of the 2 reaction commands, Birth by Sleep's command deck spam, and Dream Drop Distance's flow motion spam. The key difference 0.2 brought to the table was that you had to play regular ass kingdom hearts first to earn the crazy forms for a limited amount of time. All the other systems pretty much discouraged you from ever touching regular kingdom hearts combat.

I wish they could go back to Kingdom Hearts 1 combat which in my mind it still the gold standard of action rpg combat. It's actually pretty tough, requires timing, and makes you feel stronger and more capable at a steady rate while the enemies keep up with your new abilities. But I understand that from a narrative perspective they can't walk back on the flashy animations without it making it feel like the characters are getting weaker and in an rpg they always have to get stronger. 0.2 combat has been their best attempt so far attempt at making you feel strong but not making the combat completely brain dead.

I second your Fuck Yeah VA-11 Hall-A! That game is rad. Swery is rad.

Virtua Fighter (is that still a thing?).

Only in my heart and Japanese Arcades.

If Street Fighter is the language of fighting games over a laggy skype connection. Virtua Fighter is best seat at the theater. It communicates not through just language but through performance, sound, sets, sights, and music.

Virtua Fighter is the one fighting series that has pretty much zero magic outside of the cyborg super boss. But still each character has a more extensive move set than pretty much any fighter. You would think this would mean it would be all about crazy combos but you would be wrong. VF is even more about footies and mind games than SF. Unlike SF, there is almost no way you can know everything your opponent is capable of because how extensive the move sets are and in turn your opponent cannot everything you capable of.

The tension as you square off against your opponent and play the mind games is the core Virtua Fighter. And the best part is that that can be enjoyed at any skill level in the game. You don't need to get good to fully appreciate the Virtua Fighter experience.

Quality unboxing but I do have one complaint. I can quite get a grasp of the size of the unit. The only reference for size I understand is a piece of fruit. If some one could get me a picture of a piece of fruit next to the unit it would be must appreciated.

There already is a Gundam 2d fighting game featuring a good chunk of the G Gundam cast. It's called Gundam Battle Assault 2.

So with this news I seen even less reason why this thing should exist and why it is a good idea. So the Sony mandate seems to be only framerate increases. The spec increase is nowhere near enough to say take a game at 30 fps to 60 fps. So you are left if two scenarios.

1. Devs target for the old PS4 like that have currently done and they try to get all games to say be like a locked 30 fps. The NEO mode would then only mean they would be less if not no frame drops. Which is hardily enough incentive for players to buy the new one or even the R&D, production, and marketing to actually create the thing.

2. The worst case is dev start targeting for the Neo spec which might result in better looking titles but they will perform like absolute garbage on PS4 as after all there doesn't seem to be any floor put in place for old PS4 hardware. Also they'll probably perform like current PS4 games on the Neo. This scenario would at least drive sells of the Neo but is hardily improves the situation of the platform. Also I would count this as splitting the base hard.

So why make this move in the first place? The only incentive I can see in this whole thing. Is Sony and devs banking on journalists and streamers playing and reviewing everything on Neo hardware. Option 1 means no more performance complaints in reviews and all gameplay videos will look super smooth. Option 2 means that the games can keep increasingly look better in the way we expect each generation to and that this gen seems like it might fall short on. But that some very weird PR band aid and I don't see how that meaningfully drives the market.

I still just don't get it.

I did not see Machamp perform a single lariat but that lucha Pikachu did perform a Stone Cold Stunner. I have mixed feelings on this product.