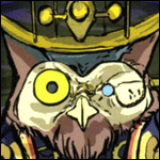 I don't know if it fits the criteria of the topic, but there's a bonus mission in Metal Gear Solid 2: Substance, External Gazer I think, where you start to do VR missions as part of that side story. And you'll do them over and over and over again until you actually exit the missions though the menu and everything before you 'escape' to the rest of the plot.

I have to say the ones with props dropping down always had more impact on me as a commitment to the bit. So it would be between Haru and Morgana. Which is hard, but I would go with Haru simply because putting down a table to have tea/coffee before the enemies die in the background is... fantastic, haha.

Makoto earns honorable mentions due to her cut in expression which makes her look like a villain because it's so intense, haha.

I never made use of those spells until I played Persona 4, which has some encounters where that is super useful. Because in any other RPG I've played goes out of its way to make those status spells as useless as possible. "Man, it would be great if I could poison this boss and do damage over time since it's going to be such a long figh- IMMUNE. Nope, I guess not."

The only exception would be Bad Breath from the Final Fantasy series which does a complete sweep of almost every status in the game in one attack. I remember using it a lot in FF7 (and I think 9, it's been awhile), because I could risk one turn to see what effects actually stick on the enemy.

@burncoat: As far as I know there was only one way to do SA which is in the very start of the contract. Davis is alone for a few moments on the roof before the soldiers find her. Getting up there without getting seen, that's a whole other problem since they have observant soldiers at the front and the drain pipe you can climb to get up there at the back.

I spent a day trying out different soldier uniforms to get up there and trying to trick the AI to look the wrong way by bumping into them and running. I managed to get up there using the drainpipe by waiting out the soldiers out back (they have an obnoxiously long conversation) but got seen when I finally killed Davis by using the Fiber Wire.

I had initially considered your plan for a scooter explosion after following her around for a few cycles. But I was really concerned about collateral damage.

I don't know why I got my hopes up, but I was hoping that Davis would be on her own trying to kill someone she's after that you could intercept or use a disguise to turn the tables on her. I was really bummed to find she had a massive soldier escort for some reason. I never caught a reason why they're protecting her. I had also hoped that she would find an excuse to try and kill the captain as a limited opportunity but... ehhh.

Now that Hitman has wrapped up Season 1 after Hokkaido, I went through and made a series of contracts revolving around dressing up as a chef or cook. Sometimes the targets would be likely employers and sometimes they're unruly customers. I mostly did 'whatever' when it came to the method of killing, so it's not just a sharp knife every time.

I blatantly stole Turboman's layout... because it's Turboman. And I made all of these on the PS4.

A Killer in the Kitchen (Paris)

A Killer in the Kitchen Too (Sapienza)

A Killer Behind the Food Stall (Marrakesh)

A Killer in the Hotel Kitchen (Bangkok)

A Killer in the Mess Hall (Colorado)

A Killer in the Daidokoro (Hokkaido)

@burncoat: In regards to exits: I was trying to figure out how any of the other exits come into play at all given the story mission has you use the double doors. Then it occurred to me that you'll only be able to get the other exits if you do the custom contracts since you don't have to go to the basement. Or Elusive Targets. I found keys for an ATV and was very confused when I only had one exit to use. So it looks like a lot of that stuff will only happen with other contacts, not the story one.

@mems1224: Yeah, those console versions. I'm still pretty shocked they got around to updating them. I was fairly sure it would just be an Orange Box Value situation where it would be this little time capsule of what it was like before they kept updating the PC version.

While Bioshock 2 was undoubtedly more of a product of business, I really really enjoyed the way that game played where you had plasmids on one hand and Big Daddy weapons in the other. The dual wielding worked great. The drill was especially a lot of fun with upgrades and the like. I think it played the best out of all three games.

Story wise.... ehhhhhhhhhhhh. Which is arguably something people have a larger focus on when it comes to Bioshock games, so I would understand if it's the odd man out in this contest. Still, out of the three games I had the most fun with 2. Which surprised me a whole lot back when I wrote about it a few years ago.

BioShock 2 is easily my favorite game of the bunch. I know it's the black sheep of the three, spawning as some Frankenstein's monster from the cold, calculating, ever present hand of business. But this game plays and feels so damn well in the story mode that a lot of the shortcomings such as justification for its existence, doesn't bother me. It was awesome to play as a Big Daddy. It was awesome to use the Drill on enemies, especially when you get the dash move. It was awesome to dual wield with plasmids. All the weapons felt like they meant business, especially the double barreled shotgun and heavy machine gun.

I also found the Big Sister boss battles legitimately terrifying as they're incredibly fast and armed to the teeth with plasmid abilities and such. The lead up to a fight them is also really good as they shriek and make it clear that 'oh shit, they're coming for me' and you should probably get ready. The fights with the other Alpha series were also really good. Timing a melee strike to stop them charging always felt good. One thing Bioshock 2 really nailed, I felt, was combat. You even had a reason to use trap Plasmids to protect Little Sisters, provided you bothered collecting ADAM with them.

It was also nice that everyone had a unique character model from Tannenbaum, to Sinclair, to Poole, to Eleanor and Sofia Lamb. It felt like Bioshock 2 was way more polished than the first game, even if it struggles to justify its place in the universe. I remember having zero interest when this game came out, and I'm kinda sorry I didn't try to check it out then.

I guess I've been looking for someway to bring this up or share it, and with the ER up and running it seems a good a time as any. But one of my favorite discoveries from the likes of AGDQ and SGDQ would be puri_puri's Shenmue Showdown where he speedruns Shenmue I and II at the same time.

He explains it in the video but it's his attempt to somehow involve Shenmue I in a marathon setting since there is no way to skip time ahead and optimum strategies involve waiting for time to pass to reach the next event... which as you can guess isn't very interesting to watch.

Fair warning the video runs 8 and a half hours, but I found it really entertaining to see him juggle the two games and how their events run together. It's also nicely narrated with lots of explanations since the video was intended as a pitch for the RPG Limit Break marathon. There are some rough spots when the games don't like to cooperate with some battles, but I enjoyed it.

So if you'd like to see Shenmue I and II in the showdown, or you have a lot of time and nothing else to do, I recommend it.