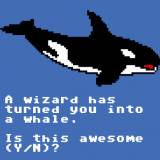 My hints for the current community quest.

A Battle in Active Time
1. Not a diamond, but if you were an idiot you might think it's one.
2. This dude's in all the games. Sometimes he has a great bushy beard, sometimes he likes his smokes.
3. Giant chickens for ridin' on!
4. Flyin' boats!
5. DUDE LOOKS LIKE A LADY.

Get Equipped With...
1. You can unlock this in Dead Rising. It shoots tennis balls if you don't get the real deal, though.
2. Wile E. Coyote? No, but the name's close enough.
3. NYC has two MLB teams, one is the Yankees, the other would be the...
4. You fight these at the end of levels in just about any game you can think of.
5. It doesn't look anything like the picture on the front!

Heart of the Tiger
1. Big cat people.
2. The dude what played Luke Skywalker also portrayed him.
3. It used to suck back in the day when our shields stayed down after a fight, luckily now we have...
4. It's not CGI, but it has 3 letters too and you probably think of it when you hear CGI.
5. If you have Midnight Brown's album Dope/Revenge, the title of track 14 would be quite helpful here.

So, yeah... Posting a blog for the sake of having one. Ooh yeah, brother! Can y'feel it!?