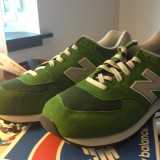 I knew something was wrong at the start.

The launch was all wrong, and I struggled to get going as other cars swarmed past me. I thought I had flubbed the start, and scrambled to try and catch up. But the car handled funny, and I couldn't get to grips with the cognitive dissonance I was feeling at first. Then, it hit me.

I picked the wrong car.

I should go back a bit. This is Forza Motorsport 4, and I'm racing with other Giant Bombers. We do this thing called the Super Series, a team-based championship full of strange cars and interesting rules. Last season, we raced vans against Smart cars. It's supposed to be fun.

This season has not gone well for me. I failed to win the first two races, so I was really focused on tuning my car for the third race. I spent lots of time working on it, and got it handling pretty well. I thought I had the fastest car of anyone. Then I looked at the leaderboards and saw someone else smash my best lap by a tenth of a second. Okay, no big deal, I can run fast laps consistently, so maybe I can still win. That’s what I thought, until the race started and I realized that I never switched from the randomly-selected default car to my highly-tuned racing machine.

I tried to keep racing for a few laps, but it just wasn’t happening. I kept bouncing off the walls and sliding all over the place. I parked in the grass. I complained about my bad luck. I said the race should be restarted. I whined and pouted about it. I gave up.

There goes the championship.

I didn’t have any fun in that race. After that, we went about our normal routine of doing random races and events. I started off mad at myself, but after a couple of events I started to cheer up a bit. I put the earlier disappointment aside for a while. I tried not to be so serious about things. It was fun.

I’m still upset with myself – for making a mistake, for ruining my race, for reacting so poorly – but I can’t do anything about it now. I prepared so much, only to mess it up. I just wanted to run well and compete for the win. I know it’s supposed to be about fun, but I can't have fun in that situation. I derive fun from competition, and I don’t think I can separate the two. I know that will always prevent me from having as much fun as I could have, and that is something I have to live with.

iRacing blog update: just got my first win ever.

I got super lucky early in the race. Started 4th because a lot of cars didn't qualify, then the front 3 cars crashed in two different incidents on the first two laps, handing me the lead. I then braked a little early for a fast sweeping turn, causing the car behind me to get too close and panic, sliding the car sideways. The 3rd place car had no time to react and ran right into him, causing a big crash that involved several cars and gave me a 5 second lead.

Maybe I should feel bad about that. Oh well, something about the car behind being responsible for not hitting the car in front or something, right insurance companies?

Then I had to drive 16 more laps without crashing, and barely held on by half a second at the end. I still feel pretty good about it, even though I shouldn't.

Video games are way more fun than other things.

Even doing things in real life that you can do in video games are not as fun as the video game version.

Racing cars? Sure it would be fun...if you could afford it. Way cheaper to play video games, especially if you wreck. Saving money is fun.

Flying a plane? Super stressful in real life, I bet. Not so in video games.

Parachuting? Okay, this may be a tough one to call. But it's still way safer in video games. Being alive is fun.

Playing music? Alright, you've got me there. Sorry, video games. You can't win 'em all!

Anyway, so I joined iRacing. It's like a cross between a racing sim and an MMO. You pay a monthly fee, and you have to demonstrate a certain level of competence to "rank up" and race against tougher competitors. Also, it comes with about 5 cars and 5 tracks...additional cars and tracks cost extra (real) money, although you can earn credits (by participating regularly) that help offset the cost slightly.

It's fun though. I like it because even though I'm not the fastest, I'm not the slowest either. There's enough people racing that you can usually get a good battle going.

I played Sports Champions today.  Shit is pretty neat!  I especially liked bocce.  I need to get another Move controller and some friends, though.  Do they sell friends at the store?

Also, GT5 got patched again and now it's awesome.  Eat it Yoshi!

Fooled around and fell in Move (or Move Hurts)

Damn store was out of regular PS3s, and I wasn't interested in going somewhere else to find one, so I got the Move bundle...then got home and realized I gave my extra HDMI cable away...and need a USB hub to charge more than one controller and have the camera plugged in all at once...and another Move controller and regular controller...damn you Sony!

Why do you want 20 bucks for the standard version of Fable 2, with no DLC, when the Platinum version (including 7 dollars worth of DLC) can be had on disc for the same price?

I can't fucking wait for the time when all games are available through digital download.

This is a game that you probably wouldn't know about unless you hang out on the /u/ subforum of 4chan.  That's the yuri board, you know, girl-girl romance/sexing.  But you'd still probably like this game, because it's an old-school RPG without all the boring random encounters such games often contain.  In fact, there's only like 3 battles in the whole thing, but the dialogue-driven story is well-written and engrossing, with lots of great humor.  And you get to see some elf boobs.  There's lots of "endings" along with one True Ending, which you can only get after getting a certain number of the other endings.  And it's a pretty good one.

Thanks, Woot deal! Now I can has Megabytes for my Ex-Box!

Going from a 20 GB hard drive to a 250 GB (well really, from 16-ish to 225-ish) is a bit of a shock.  I was deleting all sorts of stuff to make way for DLC, and now I'm actively seeking out things to download just for the hell of it.  I'm going to end up going back into the games I haven't played just to INSTALL them and then make large replay files to fill space.  I'm gong to download demos of games I don't like and trial versions of arcade games.  Someone help, please!