by Ryan Davis on November 17, 2009
Share:TwitterFacebookReddit

Assassin's Creed II elaborates on the good ideas of its sneak-and-stab forebear, making an experience that requires far fewer excuses to enjoy.


After an uneven start, the Assassin's Creed series is finding its footing in its second chapter. The original was an imperfect gem, a game with more heady concept and spark than staying power--qualities that, frankly, make it the ideal candidate for a more potent sequel. It would seem that the developers at Ubisoft Montreal have put considerable thought into how to bring some color and depth to the detailed and occasionally brilliant sketch work provided by the original Assassin's Creed, and that effort has paid off generously.

Assassin's Creed II has a bit more to offer those already familiar with the high-concept intricacies of the original, where you played as a bold and highly serious young assassin named Altair living in the Holy Land during the Crusades. Although, really you were playing as Desmond Miles, an average every-man strapped into a genetic memory machine called the Animus. Locked-up in a high-security facility, Desmond was forced to play through this whole Altair scenario by a high-tech, ultramodern, and exceedingly diabolical order of Templars, who are searching through history for clues concerning some ancient artifacts of supernatural power that they hope to use to end their centuries-spanning war with those do-gooder Assassins. If all this premise is just whizzing clean over your head, you may want to read up before jumping in here. Assassin's Creed II makes some token effort to catch up new players, but after a quick summary reel, it picks right back up from the final shot of the first Assassin's Creed and doesn't look back.


After an efficiently eventful opening, it's established that, with the Templars on the move and Desmond in the custody and employ of the Assassins, it's time for Desmond to start his training to become a proper, real-live killer. In a plot device of distinctly Matrixian construction, Desmond trains by hopping into the Animus (well, an Animus, anyway). This time he's playing through some of the more eventful moments in the life of an ancestor named Ezio Auditore, a privileged young man living a rambunctious, devil-may-care life in Renaissance-era Florence, Italy. In a striking and somewhat peculiar move, you start off your Ezio experience with one of the biggest events for anyone: birth. This is the first sign of what becomes one of the clear differences between this game and the last--a protagonist you can care about.


Altair was a bit of a blank slate, a character defined by his post. He was a total bad-ass, no doubt, but he often came off as callous, and for all the long-winded philosophical tap-dancing that went on, there was never any insight into the character. With Ezio, you watch as an incredibly justified vendetta drives him from brash bon vivant to brutal and unrepentant assassin, albeit one whose interests seem to line up with the greater good. Ezio's a colorful character, but much of the game's vibrance comes from the cities it takes place in, most notably Florence and Venice, both of which have such incredibly distinctive feels. The game definitely looks better when it's rendering the cramped city life than the sprawling countryside in between, though there are now numerous fast-travel points that make it easier to skip the flyover areas.

Not content creating lively, convincing renditions of real places, Assassin's Creed II weaves itself freely into the tumultuous history of Renaissance Italy, linking Ezio's path and the secret war between the Templars and the assassins with real historical figures like Lorenzo de'Medici, Dante Alighieri, Niccolò Machiavelli, and Leonard da Vinci, along with numerous, lesser figures. It's a move that doesn't necessarily make the game's fantastical events somehow more plausible, but it's done well enough to bring some verisimilitude to the setting in general.

That the events of Ezio's life are basically just a crash-course training session for Desmond make it hard to get too invested in Ezio's fate. You won't spend much time at all outside of the Animus in Assassin's Creed II, but the game still finds some fun ways to play around with the whole metafictional premise, an angle that's responsible for two of the game's most striking moments. Storywise, Assassin's Creed II has all the connective tissue of the second act in a trilogy, building on the original while creating more questions than it answers, and setting things up for what should be an interesting part three.

Despite the distinctions that the characters and locales provide, the biggest differentiator between Assassin's Creed and Assassin's Creed II is that there's just so much more stuff to do here. Nearly all of the discreet systems from the first game have been evolved and elaborated on in some meaningful fashion. This starts with Ezio himself, who benefits from the resources that his social station provide, though he's also generally just a superior specimen. Ezio's more agile than Altair, able to scale buildings more rapidly and gracefully. He's better in a straight-up fight, where the timing's been relaxed a bit and you're given the additional ability to disarm your foes, making their weapons your own. Ezio's dual wrist-mounted blades give him more--and more unflinchingly brutal--assassination opportunities.

He's more capable at disappearing into a crowd, able to blend in with any groups of pedestrians wandering the streets, toss out handfuls of coins to create a commotion and distract guards, or simply hire a group of comely courtesans to provide mobile cover. While Ezio has more means by which to dodge security, guards now have more memory of your action. Too much high-profile wetworking will leave you with a notoriety level that makes it harder to get around, though you can then reduce your notoriety level by tearing down wanted signs, bribing heralds, and murdering corrupt city officials. Then there's entirely new elements, like an economic system where the monetary investments you make into the small, dilapidated town surrounding your family villa, will pay out dividends that you can spend on new weapons, armor, color schemes for your outfit, and more.

Ezio's quest for revenge leads him on a series of thinly-disguised tutorials, various configurations of assassination assignments, and some crazy, one-of-a-kind set pieces. Though a certain murder-fatigue can set in after a while, the game does its best to stave it off with regular changes of scenery and plenty of extracurricular activities. There are thankfully no flags to be collected, though there are still race, courier, and assassination side missions to take on. You'll find labyrinthine tombs that require crackerjack timing and confident command of Ezio's full set of abilities to traverse. Monuments are laced with secret symbols that, when found and activated, mete out pieces of a puzzle left behind by a less fortunate Animus subject. You'll randomly happen upon pickpockets and enemy couriers that can be hunted down for profit. Most of the time, you don't have to seek out diversion; it's much more likely that you'll just naturally get sidetracked on your way to murder someone else.


This isn't to say there aren't some grievances to be leveled against Assassin's Creed II. Like the original, there's too much recycled voice work in the world at large, and if I never again hear the Italian-tinged voice that cries out “money, money, money!” when you toss some coins on the street, it'll be too soon. The semi-auto nature of the way Assassin's Creed's traversal systems work is a big part of what makes it feel so slick, but it can also backfire on you. Considering Ezio's high-wire lifestyle, it's usually pretty frustrating and calamitous when a your intended direction isn't interpreted the way you might hope. Lastly, this is, generally speaking, a pretty stunning-looking game, from the scale and detail of the world to Ezio's subtle, deadly movements, which makes it that much more surprising that all of the facial animation is as awkward as it is.

I came into Assassin's Creed II with a certain qualified affection for the original, and was thoroughly pleased with the lessons the developers learned between the two. But this isn't a reinvention, it's a refinement. Assassin's Creed II offers, fundamentally, the same kinds of thrills as its predecessor--leaping from rooftop to rooftop with surefooted ease, appearing out of nowhere to kill your target with a quick blade, then vanishing effortlessly into a crowd. It's just been expanded, streamlined, and overhauled in ways that bring it closer to grace and make it a much easier game to recommend.

Disclosure: The game featured in this review is or was an advertised product on giantbomb.com.
Load Comments 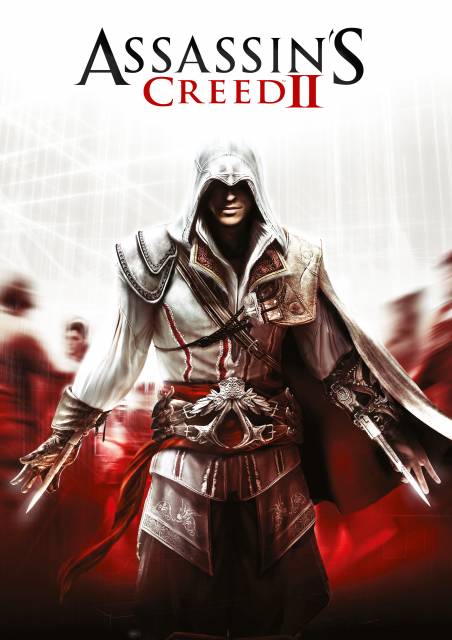