by Jeff Gerstmann on September 17, 2012
Share:TwitterFacebookReddit

Borderlands 2 gives you more Borderlands. No more, no less.

Borderlands 2 feels like someone sat down and built a checklist of the first game's issues--simplistic AI, PC interface issues, bad boss battles, the lack of a trade interface--and set out to fix them. By that standard, it's certainly a better game than the original, and it backs these additions up with smart online updates, an even more expansive random loot generator, and a revamped set of character classes that make every piece of gear and every skill point you spend feel like a tough trade-off between different types of character growth. It feels very iterative in spots, and it often feels like you can see the parts where Gearbox ripped out an old system and swapped it for a more robust and balanced replacement. It also maintains its strong sense of humor, but the various characters in play throughout Borderlands 2 can be a little hit-and-miss, leading to cases where I just wanted the game to shut up and let me get back to shooting stuff and opening chests.

Borderlands 2 is set five years after the events of the first game and features an all-new cast of playable characters, who are again cast as "vault hunters" en route to Pandora to make a fortune. The cast of the first game now exist as full-on characters in the world, complete with dialogue that helps flesh them out as actual people, rather than mostly silent player characters. Most of your missions will come from Roland and the gang, though since they were barely characters in the first game, I never really got attached to any of them. The original gang serves as leaders of a resistance movement that's attempting to fight against the Hyperion Corporation, led by a smarmy prick named Handsome Jack. It seems that Jack swooped in after the events of the first game, took credit for the vault hunters' actions, and is now attempting to mine the heck out of the planet because it's crawling in priceless alien ore that, naturally, is one of the keys to awakening some ancient alien power. You, as one of the new vault hunters that's been screwed over by Handsome Jack and left for dead, quickly team up with the old crew to do their bidding, seek revenge, and collect a whole lot of loot along the way.

Though the first Borderlands certainly had more than its fair share of loot variety, the sequel really blows this aspect of the game out by bringing more and flashier effects to weapons as well as shields, class mods, grenade types, and relics. You'll find large capacity shields that lower your health, or shields that give you a deep bonus to melee damage when they're depleted, or shields that reflect damage onto melee attackers with an elemental bonus. Grenades can have elemental effects as well, along with statistics such as fuse time, radius, and overall damage. But the grenades can still be bouncing betties, transfusion grenades that leech health from your targets, and other types that appeared in the first game. Class mods and relics spread out quite a bit, too, giving you items that give you more experience points for kills, larger magazine size for weapons, or even bonuses that only work when you're firing guns from a specific manufacturer.

Gun manufacturers are one of the ways that Borderlands 2 gives method to its madness, and each weapon manufacturer specializes in a different style of weapon. Hyperion guns, for example, gain accuracy when you hold the fire button down, so instead of getting wild and all over the place like you'd expect, you actually get deadlier in longer bursts. That's weird. Jakobs tends to deal in revolvers and other Western-themed guns that have your character fanning the hammer as he or she squeezes off rounds as quickly as you can pull the trigger on your controller. Maliwan deals in weapons with elemental effects. Bandit weapons all have misspelled names and tend to have larger magazine sizes than the others. You get the idea. On top of that, it's sort of easy to get a sense for a weapon's basic style by just looking at it. Assault rifles with huge, open-ended barrels probably fire tiny rockets instead of bullets, for example. It'd be nice if there was an easy way to see a weapon actually firing without going through the process of actually equipping it, but after a dozen or so hours, you start to get a sense for which weapons fit with your play style and which weapons are just vendor trash.

I don't know how you played the original Borderlands, but at some point, my Soldier character became practically unstoppable. With the ability to regenerate ammo and health, he became almost completely self-sufficient, and armed with the proper combat rifle, it was trivial to pick him back up if he ever managed to fall. Borderlands 2's skills feel a bit more balanced, making it more difficult to simultaneously spec in every direction. And the classes that appear analogous to classes from the first game aren't, so even if you think you know how the guy who tosses out a turret will play, the Commando feels very different from the Soldier. Even though you can easily respec your character at any time, I found myself agonizing over every skill decision because none of them were perfect fits for every situation. The loot, also, forces those decisions. Equipping a shield with a high capacity but also a penalty to your health might sound like a great idea... until you encounter a crew armed with shield-draining shock weapons. The only constant is that corrosive weapons, which chew through armored targets quite well, seem way more useful here than they were in the first game, because most of the villain's forces are armored robots.

Though questing in the direction of Handsome Jack is the entirety of the main line in Borderlands 2, there are plenty of side missions to find along the way. These are the missions that take you in wild different directions as you attempt to help find a new name for one of Pandora's creatures, help out a robot that wants to be human, or decide whether you want to return lewd photos of Moxxi to Marcus or back to Moxxi herself. In this case, the periphery of the experience is more interesting and fun than its core. The main quest pits you against Handsome Jack, who comes across as a one-note villain with very little to offer beyond a thick layer of smarm that gets old after the first few hours. I kept expecting some sort of meaningful progression for the villain, but the end result is a flat character that's more annoying than anything else. It was more of a "I wish I could disable this character's dialogue" feeling than a "boy, I can't wait to shut this jerk up with my guns" situation. In contrast, the rest of the game is lush with great little touches in its dialogue. Some of the best writing in the entire game, in fact, comes when you take a little too long to take action, be it holding for a moment before freeing Claptrap from the snow to waiting for the Guardian Angel to get impatient before you insert Quest Object A into Mission Advancement Slot B. These little gags are often worth waiting for, and even though they're usually only a couple of lines, they're some of the funniest moments in a game that, with a glaring exception or two, is generally pretty funny to begin with.

But the story and characters aren't everything. Playing with other people is what Borderlands does best, and that aspect of the game has grown up quite a bit. At any time you can pause your game and bring up a network menu to make your session publicly accessible, friends only, invite only, LAN, or totally offline. You can do this on the fly, without having to quit out or anything like that. It's really nice. Once players are in your game, you can open up the all-new trade interface to pass items around without having to drop them on the ground and expose yourself to potential thievery. In general, playing with other people is pretty much painless, even on PC, which now uses Steamworks across the board instead of that GameSpy nonsense. The PC version of the game is much friendlier overall, and the in-game menus for inventory are easily manipulated with a mouse. Playing the game with a mouse and keyboard feels just fine, but you can still play the PC version with a controller just as easily. Over on consoles, you'll still get a good sense of the game's terrific art, but the frame rates get quite dodgy when then action picks up and there's still scads of texture pop-in whenever you change zones. The PS3 version of the game, sort of like its predecessor, looks a little grimy and jaggy when compared to the 360 version, but it's certainly not a crippling issue.

I obsessed over the original Borderlands in spite of its flaws. Earning loot and exploring every little corner of the world became top priority for me when that game was released, and I kept up with its DLC add-ons, doing my best to ignore their decidedly uneven quality. Borderlands 2 is a better game in most of the ways that matter, but some of that is brought down by the familiarity of the experience. Perhaps some of that is on me and spending a couple hundred hours with the first game has rendered me resilient to some of the new game's charms, but as someone who went into Borderlands 2 with a sickness that I thought only more Borderlands could cure, I'm left feeling like I didn't receive a full dose this time around. 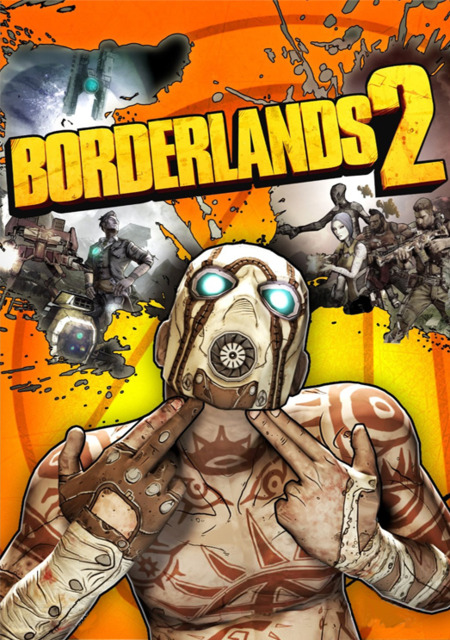