by Jeff Gerstmann on February 28, 2013
Share:TwitterFacebookReddit

Crysis 3 looks great on the PC, but was this sequel really necessary?

I liked Crysis 2. It took a lot of the cool enemy tagging and freeform tactical combat from Crytek's previous games and presented it in a more coherent way. It was an intelligently streamlined experience that, as a person that couldn't get into the first game's wide-open antics, split the difference between the first game and the more guided, rollercoaster-style take on shooter campaign design that was, at one point anyway, all the rage. Crysis 3, on the other hand, feels like a developer attempting to push its luck a little too far. It picks up where the previous game left off and doesn't make dramatic changes. For the most part, it's well-made, and on the PC it's still quite a graphical showpiece, but that doesn't make up for the prosaic nature of the rest of Crysis 3.

Crysis 3 reunites Prophet, the nanosuit-wearing super soldier of record, with Psycho, the playable character in the old side-story, Crysis Warhead. In the years since that game, Psycho has been painfully yanked out of his nanosuit, and Prophet--whatever the heck he is at this point--has just been broken loose by Psycho and a ragtag group of rebels who are up against CELL, which is your typically evil corporation-slash-private-military-slash-toying-with-power-it-doesn't-understand. While the rebels are obsessed with CELL, Prophet's worried about the greater threat of the Ceph, the alien race he crippled in Crysis 2. With Prophet being, well, a prophet, it shouldn't surprise you that you'll spend more time in Crysis 3 fighting off the alien menace. The story hinges on your ability to care about Psycho and Prophet as characters, something that the previous games haven't exactly made a priority. As a result, the reasoning behind the action is straight-up bland, skirting dangerously close to the same "only One Man can save us from this Ancient Alien Threat" story that seems to drive so many different sci-fi trilogies these days.

The action end of Crysis 3 is totally competent, with the same suit powers you saw in the previous game. The cloak lets you move slowly and quietly to get behind enemies for stealth kills, while the armor mode lets you get out of a jam when you get caught. This time around, Prophet can wield a bow, giving you another way to kill enemies while staying fully cloaked. If you're the patient type, the bow is overpowered, letting you trivialize many of the game's encounters as long as you're willing to back off and let your cloak energy recharge. If you're the gung-ho type, it's useless. The game also has collectable upgrade points that unlock perks across four different categories. The game takes the Call of Duty comparison a step further by offering upgraded versions of those perks that unlock when you complete in-game challenges. So you may have to get 25 stealth kills to make your cloak last even longer than it would normally, or perhaps your ability to tag enemies extends even further when you tag 25 enemies with your spotting scope with the basic version of the upgrade equipped. There are a lot of different options to unlock and use, but I found that the vast majority of them didn't fit at all with my style, so I had already selected and upgraded the optimal perks well before the game was over.

Though the game opens up into large areas near its conclusion, much of the game is paced in a way that helps make combat feel more monotonous. You'll encounter an enemy here and there, but for the most part you stumble upon groups of nine or so foes who aren't aware of your presence yet. This gives you time to tag all the enemies and figure out how to take them on. Typically, the bow is a fine solution, since it kills most basic enemies in one hit and doesn't break stealth. If another enemy sees a body go down, a couple of reinforcements come in and the remaining enemies are alerted, making them skitter around a bit more frantically. This just makes them slightly harder--though certainly not impossible--to hit with the bow. Eventually you'll run out of arrows or just get bored of picking them off this way and switch to guns to just get on with it. Even the larger alien enemies you face later on don't feel particularly deadly on what the game makes out to be its equivalent of "medium" difficulty, but I also never felt like i had enough exciting options at hand to make these encounters fun in the sandboxy way that these games have been in the past. At some point I just found myself stealthing past entire waves of enemies, when possible.

Why, then, is Crysis 3 not a bad game? Well, if we're talking about the PC version on a reasonably powerful machine, we're talking about the franchise's standout feature. It's a great-looking game. The opening, where Psycho rescues Prophet in the middle of a rain storm, is a striking moment, with everything from the rain to Psycho's scarred-up face worth taking a closer look at. Eventually, the visual quality starts to fade into the background as you go from one military-looking installation to the next, but the spots where you get outside and see the game's take on a completely overgrown, almost jungle-like New York City can be absolutely stunning. I stopped dead in my tracks on a few occasions just to look around and take it all in. The Xbox 360 version is grungy, by comparison, with lower texture quality and a lower framerate. That's unsurprising, but when taken against the other games on the platform, the 360 version still looks OK. It's certainly playable, anyway, though a weird audio bug made one of the early open-area segments practically unplayable, since it's hard to know when to take cover and hide from incoming rockets if the audio isn't playing back at all. For what it's worth, the Crysis 3 Twitter account claims that a patch is in the works, but said patch isn't available as of this writing, so if you've got a home theater set up, keep an ear out for that.

Crysis 3 also contains competitive multiplayer with the same sort of loadout-based progression and killstreak bonuses. It's a formula for a reason, but it's not getting any fresher, that's for sure. I really liked seeing an updated version of the Skyline map, which was my favorite spot to play in Crysis 2. At the same time, if the coolest part of the multiplayer is that it has my favorite map from the previous game, well, that's probably not a great thing, right? The multiplayer is absolutely functional and ships with a handful of game types, including a modifier that takes players out of the suits, eliminating the power angle completely, in case you weren't interested in using the one thing that makes Crysis stand apart from the competition. It's not bad, but you could do better with another game.

That's my feeling about all of Crysis 3, really. It's serviceable and, again, it looks great on the PC, but was this trip really necessary? It's an average experience, overall, and in a genre that continues to be packed full of competition, you'd probably be better off finding a discounted copy of Crysis 2 or, if the large combat areas of the original Crysis really float your boat, spend some time with Far Cry 3, instead. 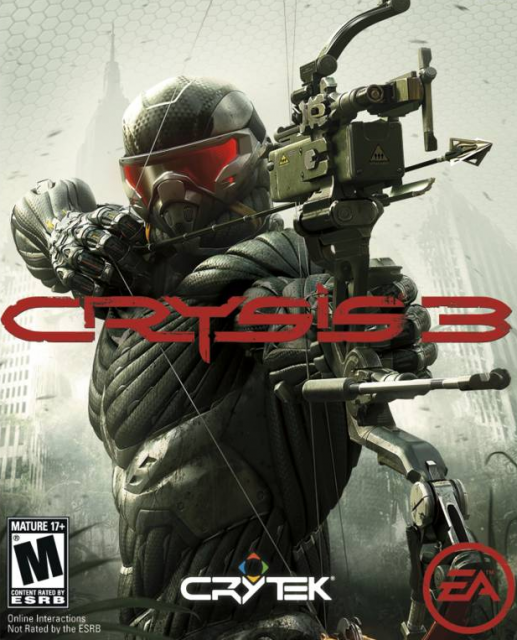