by Jeff Gerstmann on October 25, 2010
Share:TwitterFacebookReddit

Most of DJ Hero 2's additions greatly expand the game, while the lengthy and varied soundtrack gives players plenty to do.


The original DJ Hero was a bright spot in a year that looked sort of grim for the music genre. Activision was flooding the market with "Hero" games and the whole thing was starting to look like it was about to collapse under its own weight. But the developers at FreeStyleGames are producing the only game with Hero in the title worth caring about in 2010, and they've made a handful of smart additions that make DJ Hero 2 feel like a better, more complete game.

DJ Hero 2 works off of the same basic concept as the previous game, offering mashed-together songs and giving you a turntable controller that you'll use to cut back and forth between the two records and, when asked, scratch. The sequel uses the same controllers as the original, but it still manages to add new types of freestyle sections, giving you a little more control over how some parts of the track sound. Freestyle crossfading sections are probably the most dramatic, since you can cut off either record or let both play. This is the most direct and realistic freestyle section available. You can also scratch on your own in freestyle scratch sections, but these don't feel as accurate. The game sort of lays out a basic scratch track, and you're sort of rubbing that back and forth. There are also held notes, where you have to hold one of the three buttons down for a set length of time. That's a minor thing on its own, obviously, but when all of these new elements combine, they make DJ Hero 2 feel more dynamic than its predecessor. There's more to do and the action feels like it's more closely simulating things you might actually do on a real turntable.

You'll deploy your mock-turntablism across 80 or so different mixes, some of which are broken out into the game's battle mode, which is where two players can compete either locally or online. The battle mode is part of an expanded multiplayer component, which offers different competitive game modes beyond the simple star battle. Some of these are more streak-focused, where you'll have to bank your longest note streak before you lose it. Another employs use of the game's power decks, which are unlocked in the single-player mode.

The single-player in DJ Hero 2 is very straightforward. It's called "empire mode," but it's not much more than a list of tracks and battles that must be completed to earn stars and unlock additional events, clothing, DJs, arenas, and so on. It's here where you'll encounter the game's licensed, real-life DJs, like Tiesto, David Guetta, and The RZA. The most important thing you'll unlock are additional mixes and the aforementioned power decks, which increase your scoring potential. The game makes good use of online leaderboards and provides a feed of what your friends are doing, giving you plenty of opportunities to battle over the lead on a specific song. The power decks can give you the edge in that battle, but the leaderboards denote their use, letting you know who's getting a bit of a lift and who's doing it without any sort of performance enhancement.

There's an expanded vocal component in DJ Hero 2 that scores a vocalist on how well they sing the songs, making this a three-player game. It's a noble concept, but singing remixes just makes the whole thing sound lame. It takes away from the mixes to have someone--even a great singer--repeating the same line or words again and again, as if their voice is also being chopped up by the turntable controllers. It's an ill-conceived effort that feels completely out of place alongside the rest of the game.

As with any music game, some portion of your enjoyment of DJ Hero 2 is going to come specifically from your musical tastes and how well they match up with the game's track list. DJ Hero 2 does a better job at picking good, modern content and, when necessary, mashing it up with notable older songs that fit the general mood of the game. There's nothing as out-of-place as Marvin Gaye's "I Heard It Through The Grapevine" in DJ Hero 2, and more of the tracks sound like quality mixes that you'd actually consider listening to outside of the game this time around. And, well, any rhythm game that dares to include Snow's "Informer" is OK in my book.

Overall, DJ Hero 2 just feels tight. Everything from the menus to the gameplay has a clean, streamlined look and feel to it. The gameplay additions--with the exception of the weak vocals--are intelligent and really make the game more playable than it was last year. While other rhythm game franchises feel like they're fizzling out, DJ Hero still feels like it's just getting started.
Jeff Gerstmann on Google+
Load Comments 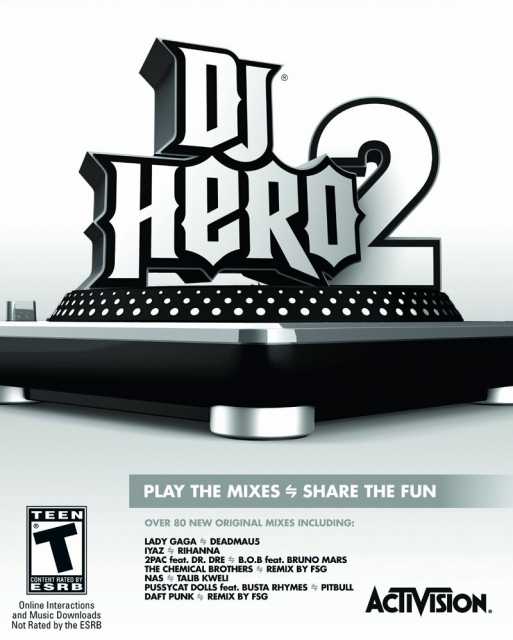