by Jeff Gerstmann on June 14, 2011
Share:TwitterFacebookReddit

Duke Nukem Forever is a sad mess of a game, but hey, at least it finally came out, right?

I certainly never expected that I'd write a review of Duke Nukem Forever. It was long-dead, relegated to the isle of canceled games alongside StarCraft: Ghost and Thrill Kill. So, in some weird way, the notion that Duke Nukem Forever is a final, shipping product is all the victory it needs. Duke Nukem Forever is practically a historical document, and my advice to you is that if you're the sort of person who followed 3D Realms all the way down and you're feeling like you need to know how this crazy tale ends, you should play Duke Nukem Forever and see what it's finally become. But also know that this final product is kind of a terrible shooter with a bunch of really mindless attempts at referential humor, both of which do a great disservice to the Duke Nukem 3D legacy. If you're not a history buff and you're just looking for a good time, look somewhere else.

For a game that's supposed to be so over-the-top and bombastic, Duke Nukem Forever sure is boring. Its longer-than-average campaign attempts to deliver on variety by mixing in a few vehicle sequences, an underwater section, and multiple levels where you're shrunk down to tiny size and forced to carefully jump from one platform to another, but these only help make the game feel old. Most of this stuff--the platforming and awkward underwater controls, specifically--has been bred out of modern shooters for a reason. In the context of Duke Nukem Forever, a lot of these sequences feel like filler, meant to distract you from the game's lackluster action. Duke can hold two weapons at a time and has a recharging, Halo-like shield meter, though it's called "Ego" here. This doesn't quite lead to the tactical considerations that a limited inventory might initially imply, though, as the only time you really need a specific weapon is when you're in a boss fight. The game's bosses can only be damaged by turrets or RPGs, so whenever you get into one of these situations, the game makes sure that you have the appropriate weaponry nearby.

The arsenal covers most of what you'd expect from a Duke Nukem game, including a shrink ray and a freeze beam that lets you toy around with enemies a little bit. Duke 3D had one of my all-time favorite shotguns (which is a pretty short list), and the gun returns in Duke Nukem Forever feeling mostly intact. Blasting pigs up close and watching them crumble after one shot is kind of satisfying, even after all these years.

But that's probably the only true satisfaction to be found in Duke Nukem Forever. We're past the point of getting thrills from basic interactivity like "hey, you can flush the toilets" or "oh, you can sort of play this awful pinball machine." If the core shooting in the game was exciting, these lame little extras would be forgivable. Instead, they make you wonder if the main parts of Duke would have been better if people weren't wasting their time making sure that the pool tables almost work. Enemies don't really burst apart in a satisfying way, and the bulk of the weaponry feels underwhelming. The console versions of the game also lose something extra in the translation, as an unstable frame rate that only seems to get worse when you're firing heavy weaponry makes everything that much harder to follow.

The action is often monotonous and basic in a way that doesn't even leave room for "old-school" thrills. This is a game that allows for headshots, but certainly doesn't require them. Most enemies don't put out too much of a fight and they go down relatively easily. The game doesn't make up for their weakness by throwing large numbers of bad guys at you at once, and there are even large sections of the game where there's no combat at all. Considering most of the non-combat sequences require you to wander and jump around bland, old-looking environments that feel like they were touched-up by someone wielding nothing but a shader that somehow makes every single surface look slightly greasy, the breaks from combat aren't any better than the parts where you shoot your guns. Even the boss fights get repetitive by having you face a sort-of-harder version of the game's first boss as the game's final boss.

The entire campaign is sprinkled with bits of dialogue from Duke Nukem himself. This, you might remember, is one of the key points about the character. He's a wise-cracking, movie-line-stealing misogynist who loves strippers and cigars. Back in 1996, we were still coming to terms with the idea that PC game characters could talk at all, so it was easy to fall in love with Duke's constant chatter. But times have changed, and Duke's schtick just feels unimaginative and sad in Duke Nukem Forever. Duke's still lifting his material from other sources, and he's getting a fair amount of it wrong. Plus plenty of it is way, way out of date. A mangled version of the "remember, Sully, when I promised to kill you last? I lied" line from Commando makes its way in here. At one point Duke sings "America, fuck yeah" just because your commanding officer mentioned America. The Internet isn't safe, either, with "porkchop sandwiches" dropping in straight out of Eric Fensler's GI Joe PSA reedits. That happened in, what, 2003? No jokes are wrapped around these references, making the whole thing feel like some kind of sub-Family Guy attempt at getting you to chuckle just because you remember a line from Starship Troopers.

When he's not "being Duke" by using movie catchphrases, he's "being Duke" by alluding to how much trim he gets. In the unironic world of Duke Nukem Forever, Duke's a superstar sex god with his own Vegas penthouse, complete with a set of sexy twins willing to do anything for him. Females that you encounter along the way fall all over themselves when they encounter you, and the first 30 minutes or so is little more than ego stroking, probably designed to remind you that Duke's a bad-ass. Men want to be him! Women want to be with him! The whole thing feels like it's trying too hard, and Duke's act was already kind of lame the first time around. This time, presented at face value without any meaningful wink or nod to modern sensibilities, the whole thing feels like it was written by crazy people. The character simply doesn't work in 2011, and now that I've played Duke Nukem Forever, I'm left wondering if the character ever truly worked at all, or if standards were just so much lower back then that we didn't bother paying much attention to how stupid it all was.

Though some will probably be offended by some of the things in Duke Nukem Forever, it's not worth getting agitated over. Like the previous game, Duke Nukem Forever's tone is meant to be tongue-in-cheek. You'll again see topless women and some other childish dialogue to accompany those boobs. I think this tone is best summed up in one of the alien hive areas, where you stumble upon a trio of human-looking boobs just sticking out of an alien-looking wall. No bodies, just boobs. Sexy, right? You can slap them around via the use button, and Duke chuckles to himself like some kind of sociopath. It's downright creepy, and it reinforces my feeling that a game with a bit more self-awareness about how out-of-touch the Duke character feels would probably be way funnier. There's certainly a place for sophomoric humor in video games, but the attempts to include it in Duke Nukem Forever fall flat most of the time. It makes Duke feel like a sad, pathetic character that continually needs to pump himself up by reminding anyone who will listen that he is, indeed, the king.

In addition to the campaign, the game also has a multiplayer mode with four different game types. These let you take the Duke weapons into standard deathmatch, team deathmatch, king of the hill, and capture the flag games. It has a maximum player count of eight. Hey, at least that's more than Duke Nukem 3D supported, right? You'll find a remake of the Hollywood level from Duke 3D among the 10 maps, but it just looks weirdly filthy. The map design doesn't feel like it sets you up for elaborate trip mine and pipe bomb traps like the previous game did, which is too bad, as that was one of the best parts about Duke's multiplayer. Like the rest of the game, the multiplayer feels a little mindless and old. Not classic--old.

When comparing platforms, it's clear that the PC version was the priority for the game's developers. There, the game is capable of running at a smooth frame rate with reasonable load times between levels. The console versions look extra grimy and unoptimized--things like texture pop-in and depth of field effects aren't as clean. The frame rates aren't as stable and the load times are practically a deal breaker, with huge gaps between levels and after any death. They give you just enough time to realize that you could probably be spending your time doing something else.

It feels weird to criticize a game that's been in development for as long as this one has for feeling like a relic, but in the end, Duke Nukem Forever's development history only really matters to a fraction of the overall audience. As I said before, if you're a part of that crowd, part of that faction that finds yourself so fascinated by this whole project that you need to know how it ends, I recommend you play Duke Nukem Forever for yourself. But I'd practically insist that you do so on the PC and try to wait for a sale. If you're not willing to play a sloppy, cobbled together first-person shooter just because it has some kind of weird historical meaning, though, just forget this ever happened and move on. It's great, in some ways, that Duke Nukem Forever was released at all. But don't be confused into thinking that it's a great game. 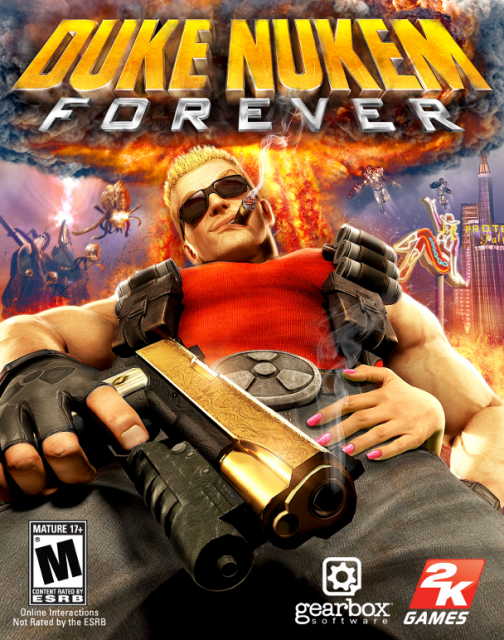