by Jeff Gerstmann on October 18, 2010
Share:TwitterFacebookReddit

Fallout: New Vegas somehow manages to have even more technical problems than Fallout 3 did, but its great characters and setting still shine through.


It says a lot about the quality of Fallout: New Vegas' writing that, despite experiencing a list of incredibly annoying bugs that only got worse as I continued playing, I still think you should play it. But when I reflect on the experience, I'll probably think about the times the game locked up on me or broke in a dozen other crazy ways first, before thinking about the great world and the objectives that fill it. If you were able to look past the issues that plagued Fallout 3 and Oblivion before it, New Vegas will eventually show you a real good time.

This edition of Fallout is set in and around the city of New Vegas. It's not quite as torn up as some of the other wastelands you've seen in previous Fallout games, but there's still plenty of scrap and a lot of ill-tempered mutant creatures roaming around the Mojave wastes. At the center of it all is New Vegas, a shining beacon of debauchery that, if it weren't for all the policing robots and rubble surrounding the big gates to the city's main strip, wouldn't feel too different from what 1950s Las Vegas probably felt like. Parts of the city are still obsessed with things like "swinging" and people like Elvis Presley. It's bright. It's gaudy. It's a great place to go if you're wealthy enough to handle the swings while gambling or just need to get out of the desert for a spell. But it's also under the control of an enigmatic man known as Mr. House. I probably don't need to tell you that this name was probably chosen specifically to allow for some uses of the phrase "the House always wins."

But House isn't the only powerful faction in town. The surrounding areas are filled with soldiers from the New California Republic and the huge tribe known as Caesar's Legion. They've been at war for some time, and they're gearing up for another big throw down for control of the Hoover Dam. There are also plenty of smaller factions out there, little tribal gangs, junkies, vault dwellers, and so on. The factions play heavily into the game's new reputation system, which supersedes the still-present-but-often-puzzling karma system.

So how do you fit into all this? You're just a courier, attempting to bring a platinum poker chip to its rightful destination. For this, you get shot in the head during the game's introduction. You're down, but not out, and your entry into this world puts you on a collision course with the smiling, slick-talking hustler that gunned you down. As you'd expect, it quickly becomes more than just a simple revenge tale, and the fate of New Vegas swings in the balance as you decide which factions to work with and which ones to dispose of.

Along the way, you'll meet a lot of interesting characters. Mr. House, for one, is a great, mysterious presence. Caesar, leader of the Legion, is another--sure, his Legion is a bunch of slave-driving scum, but at least he's a learned man. The NCR is full of bureaucrats and soldiers, and they're probably the closest thing to modern society that you'll see in New Vegas. That also means that they aren't much fun. Deciding which faction to support in their quest to take Vegas is the focal point of the story, and it's the one that has the most impact on how it ends. There are also a lot of side quests, and some of these make for the game's best moments, though others feel a little slapped together. As in Fallout 3, New Vegas' ending is presented as a series of spoken segments that tell you how your action--or inaction--impacted the world around you. So if you don't help the stealth-loving super mutants wean themselves off of stealth addiction, you'll find out exactly what happens just before the credits roll. Though see the bits of the ending flip one way or the other is sort of an anti-climactic experience, it at least tells you more about the state of the world than you'd have if the game ended after seeing its last in-engine moment.

Let's talk about that engine. New Vegas runs on the same basic framework that powered Fallout 3 and The Elder Scrolls IV: Oblivion, and it brings a lot of technical weirdness up from those games. Less than an hour in, I was staring at a guard, pacing back and forth to guard his post... 20 feet off the ground. Enemies clip into the ground with an alarming frequency, often making them impossible to shoot. The game--a retail disc running on a new-model Xbox 360--crashed on me about a dozen times over the 33 hours I spent playing, often taking a significant amount of progress with it. The load times and frame rate seemed to get randomly worse as I continued to play the game, with some simple scene transitions taking 20 seconds or more. The technical hurdles you'll have to make to stay interested in New Vegas are meaner and more frustrating than any Deathclaw or Nightkin you'll face in the game. If you're the type of person who likes to watch for a patch or two before settling into a game, know this now: you probably don't want to play Fallout: New Vegas right away.

But if you can accept a partially broken game, Fallout: New Vegas is well-worth the trip. It also streamlines some of the rougher aspects of Fallout 3. Dealing with companions, for example, can be done via a wheel of options that pop up when you approach that companion and hit A. This way, you can access their inventory or tell them to heal up without having to work through a bunch of dialogue options first. Some of the companions are pretty cool, too, such as a cyber-dog that can knock your enemies down or Veronica, a young Brotherhood of Steel scribe that offers up some terrific quips, should you ever stop to talk to her. The game also has "true iron sights," which lets you get an aiming view similar to that of Call of Duty, but the sights on most of the guns aren't very good, which just made me want to turn all that off and go back to a generic zoom view when aiming.

The iron sights prove once again that Fallout is not, first and foremost, a first-person shooter, and it's as easy as it's ever been to see invisible dice rolls guiding your bullets just as much as any skill you might when holding a gamepad. The game offers weapon mods, such as scopes and silencers, that you can apply, but they're limited to specific weapons. Modern-day Fallout is about scavenging up whatever weapons you can. Unless you want to get married to a weapon and are willing to spend a significant amount of money keeping it in working order, weapon mods are a waste of time. I was too busy picking up new stuff to worry about keeping one or two guns for any real length of time. The game also has a crafting system that lets you cook the animal meat you scavenge, reload bullets, concoct your own stimpacks, and so on. This might come down to how you want to play the game, but I didn't mess around with crafting very often and never ran low on supplies. There are more than enough stimpacks and existing food items out there that you don't need to go and make your own.

Beyond the handful of new features, New Vegas has the Fallout 3 stuff in it. You'll build your character at the beginning using the same type of character creator, and you'll set your S.P.E.C.I.A.L. skills. You'll earn perks as you level up and, yes, Bloody Mess is still terrific, as is Mysterious Stranger. There are enough new perks thrown in, however, to keep the game from feeling like it's retreading too much of the same ground. The system works, and it's comforting that this aspect of the game didn't change too much. If you're looking for a more dramatic change, there's a "hardcore" mode you can enable, which takes things like dehydration, hunger, and sleep deprivation into account while also making limbs much more difficult to heal while you're out in the wasteland, forcing more trips to a doctor. As its name states, it's pretty hardcore... I certainly don't want anything to do with it, that's for sure.

Visually, Fallout: New Vegas has some amazing moments, though walking out of the doctor's shack and setting eyes on the world for the first time isn't quite as climactic as exiting the vault for the first time was in Fallout 3. The game handles the transition of time really well. Sunsets and sunrises look outstanding, and the glow you'll see coming from the New Vegas strip from just about anywhere in the world also looks great. Some of this is offset by the game's often-awkward animation. Characters still scurry from place to place at times, giving the appearance that they have to hit their marks before delivering a line of dialogue, which can make the whole thing seem like a bad school play in spots.

There's a lot of great voice acting in New Vegas, from the Securitron robots that patrol the strip to the ghouls you find hiding out in a rocket testing facility. You'll hear some great music along the way, too, most of which either fits into the swinging Vegas style or more of a 1930s cowboy theme. As in Fallout 3, the radio stations you can tune in with your wrist-mounted Pip-Boy are great at first, but quickly become too repetitive. Wayne Newton's great as "Mr. Las Vegas" on the radio, but he repeats himself so frequently that it's hard to keep it running while you play. Also, the playlists are short. I feel like I've heard Peggy Lee sing "Johnny Guitar" a thousand times now. With more dialogue and more licensed tracks, the radio option could have been much, much better.

It's not a surprise that Fallout: New Vegas sticks closely to Fallout 3's structure and style. But if it weren't for the game's way-too-long list of technical issues, New Vegas would actually be better than its predecessor. Instead, it's a well-written game with so many issues that some of you might want to take a pass, at least until some of this nonsense gets fixed. Yet, for all its flaws, I'd consider taking a second run through it, if only to see how some of the game's finer points play out with different choices.
Jeff Gerstmann on Google+
Load Comments 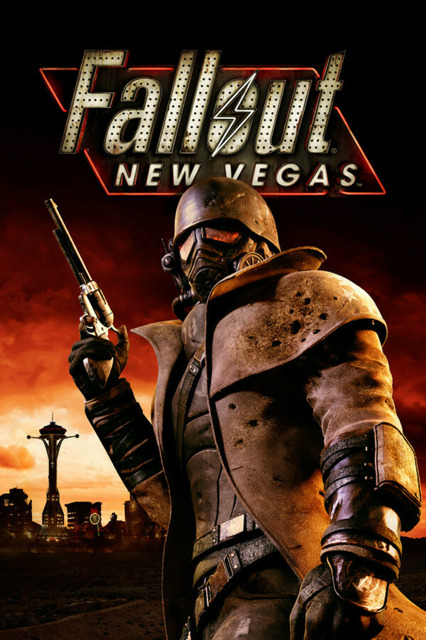