by Alex Navarro on October 16, 2010
Share:TwitterFacebookReddit

Nintendo and Good-Feel stab straight at the cute center of your brain in this adorable and addictive platformer.

Just because a game offers up an easy-going experience doesn't automatically relegate it to the status of "kids game." Take Kirby's Epic Yarn, Nintendo's first console-based adventure for its vacuum-powered, squishy-cute mascot since 2003's Kirby's Air Ride for the GameCube (dude's been pretty much rocking the GBA and DS exclusively since that time). This is a game that is, by most people's definition, pretty short, and pretty easy. This game doesn't require any particularly crazy skills to progress through its levels, nor does it even toy with the concept of in-game death. Literally, you cannot die.

At the same time, something about Kirby's Epic Yarn transcends the traditional notion of "challenge" as being a primary factor to make a game worth playing. Developer Good-Feel (apt, very apt) has discovered something slightly insidious here, harnessing the power of overwhelming cuteness not just to create an endorphin-releasing visual experience, but to make its gameplay somehow far more compelling than it seems like it really ought to be, given its relative simplicity.

This thoroughly precious tale begins with a bit of storybook introduction about Kirby's latest predicament. One day, Kirby runs afoul of a cranky sorcerer by the name of Yin-Yarn, who is, appropriately enough, constructed entirely from yarn. After gobbling up Yin-Yarn's delicious Metamato (as Kirby is often wont to do), Yin-Yarn angrily turns the tables on our resident sucker-up of all things evil, and sucks Kirby into an alternate dimension via a magical gym sock. Kirby awakens in a reality in which the world around him "feels like pants" (the narrator's words, not mine), as all of the world appears constructed out of various types of patchwork materials. Much to his surprise, Kirby discovers that even his body has gone the arts-and-crafts route, with his previously pudgy mass replaced by outlines of pink and red yarn.

This sudden change in body mass also happens to rob our favorite walking Dirt Devil of his powers of suction, meaning that Epic Yarn doesn't really play quite the way that a typical Kirby platformer would. Now, Kirby's primary weapon is a piece of wayward yarn he can toss in the direction of enemies to either pull them apart or grab them, roll them up into a ball of yarn, and toss as a projectile. More important than that, though, is how Kirby's yarn arm comes into play as he hops and jumps around each of the game's levels. Progression through the world requires you to be aware of various dangling threads, loose buttons, and other attachable linens scattered around each stage. Sometimes latching onto one of these will simply provide Kirby a place to swing from, and other times, it might unstitch a significant chunk of the environment, revealing a new area to traverse.

Half of the game's addictive quality comes from simply wanting to pull at every random thread and button and patch that the game presents you with. I won't sit here and pretend that that doesn't have quite a bit to do with how unabashedly precious everything in this game is, because it totally does. The visuals are, by any standard, delectable. The detail that's gone into each and every piece of fabric woven into this game world is entirely impressive, and at the same time, spine-meltingly adorable. On top of all of that, Epic Yarn is one of those rare games where visual presentation actually feeds your desire to keep playing. Every world has its own unique, patchwork feel to it, and exploring each stage not only offers up amusing visual treats (my particular favorite being the game's definition of "water," which is just blue yarn that you swim around in), but ample opportunities for discovery as well.

Every stage is chock full of "beads," little candy-colored gems that practically beg to be collected. Many of these are hidden behind various threads and buttons and zippers in each stage. The idea is to collect enough beads in each level to earn yourself a gold medal--doing so during boss fights even allows you to unlock additional hidden stages in each game world. More to the point though, these beads are the game's sole method of punishment for not playing well. Getting hit or falling down a pit will cause you to lose almost embarrassing numbers of beads. Maybe it's just my natural desire to collect every gleaming, shiny thing in front of me, but every time I finished a level with sub-standard bead numbers, I wanted to go back and play again.

There are also myriad rewards to collect, including various pieces of furniture, and new musical tracks to play with. These furniture pieces can be used in your own little apartment you get at the beginning of the game, or you can place them in other apartments found in the complex. Doing so will cause new people to move in, and each one of these new tenants comes with a new minigame to play along with them (hide and seek, races, etc.). These rewards are, arguably, the weakest part of the game, unfortunately. The minigames are decent enough, but the stitched-in Animal Crossing elements don't hold a great deal of sway.

I haven't even gotten into Kirby's incredibly fun form-shifting abilities (by entering vortexes found in certain stages, Kirby will change into anything ranging from an acrobatic dolphin, to an off-road racer, to an enormous, yarn-missile-launching tank) or the game's excellent two-player functionality (a second player can take control of Prince Fluff, a cantankerous looking blue yarn creature that has all the same abilities as Kirby), but at this point, I feel like rambling on too much longer would rob you of the game's best quality--its feeling of constant discovery. Every single time I found some new form Kirby could take on, or encountered a new, aggressively cute world to explore, I found myself with a big, doofy grin splayed across my face.

And that is what Kirby's Epic Yarn is all about. It's not a game for people who like to grit their teeth in white-knuckled frustration, but rather the perfect play experience for people who like to kick back and have a breezy time playing around and seeing all the aesthetic delights a game like this can offer up. I consider myself a fairly cynical person by nature. That Kirby's Epic Yarn left me a smiling, cooing, mushy-brained mess of happy by the end of it says an awful lot about how well-constructed and almost painfully pleasing this game is to play.
Alex Navarro on Google+
Load Comments 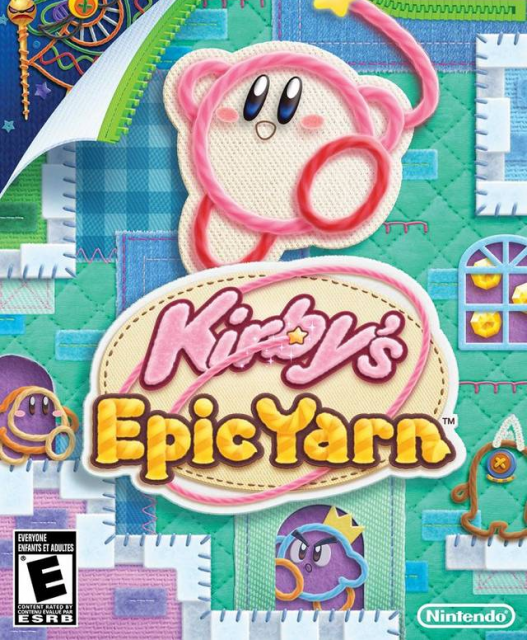