by Ryan Davis on May 14, 2012
Share:TwitterFacebookReddit

Rockstar Games faced no small feat in taking on Max Payne. With nearly a decade since Finnish developer Remedy--long since busy exploring the dark wilderness of the subconscious with Alan Wake--parted ways with the series, the challenges were manifold. After that much time, did the John-Woo-inspired gun ballet still play? And what of the comic-book-noir aesthetic, which leavened Max’s blackstrap pathos with fleets of self-reference and absurdity? Rockstar, of course, addresses both of these issues with no small amount of its own usual panache, discarding large swaths of Max’s established aesthetic and asserting its own set of influences in the process.

Rockstar held publishing duties on the first two Max Payne games, but Max Payne 3 really feels like a modern Rockstar game, with the grimy creative fingerprints of the creators of Grand Theft Auto IV and Red Dead Redemption all over it. To trot out a hoary old line that Max Payne himself would probably mutter to himself and then sneer at, this ain’t your grandaddy’s Max Payne. And in a way, that’s kind of a shame, since there hasn’t really been anything quite like Max Payne since Max Payne. Max Payne 3 is definitely a different kind of cocktail, but it still packs a pretty good wallop.

Even for Max, a lot of time has passed since Max Payne 2: The Fall of Max Payne, to the point that the dramatic, traumatic events of the first two games are little more than old scar tissue now. Having long since ruined anything worth ruining in New York with booze and pills, Max has retreated from his own life and taken up reluctant employment as a personal bodyguard for the wealthy, powerful, and treacherous Branco family in São Paulo, Brazil. For as comfortably as Max and his black jacket fit into the shadows of New York’s underworld, he’s a stranger in a strange land here. His leathery American frame sticks out like a sore thumb in the washed-out sunlight of both São Paulo’s rich playgrounds of privilege and its rusted favelas, which he fumbles through with as little grasp on the local language as to why he’s really in São Paulo. Max has never been a particularly sunny soul, but here he regards his idle rich clients with about as much simmering contempt as he does for his own half-drunk, careless ineptitude as family members get kidnapped and his bad situation continues to find new ways to get worse.

Rockstar has never been particularly shy about its specific influences, which are often cinematic in origin. With Max Payne 3, the setting, character situations, and overall look of the game make comparisons to the Tony Scott movie Man on Fire inevitable, and apt, though there are strains of director Michael Mann’s slick latter-day crime dramas in there as well, all of it spiked with a spare synthesizer score and shocking moments of extreme violence. Though it’s not couched in the caricatured satire of GTAIV or the bleak revisionist period trappings of Red Dead, that same authorial voice still rings like a gunshot.

There’s still plenty of internal monologue from Max, but like the rest of the game, the language is less flowery and more nihilistic than Remedy’s work with the character. It’s still every bit as stylish, but in a completely different way, replacing Max’s old static comic-panel storytelling devices with flashy multi-frame cutscenes that are jumpy and dynamic, often popping up key bits of dialogue on screen for added punch. It’s a distinct look and feel that, in some ways, reminded me more of the blown-out neon and cheap digital noise of IO Interactive’s Kane & Lynch 2: Dog Days than the previous Max Payne games, but there are times that it overindulges in its own sense of style, distracting from the plot’s serpentine double-crossing and Max’s near-constant self-flagellation.

Max may be greyer at the temples than when we last left him, and far more emotionally handicapped by drink and drugs, but he’s no less capable than he ever was when leaping through the air in slow-motion with a pair of guns while facing down armies of thugs, crooked cops, and worse. Tapping into Max’s hallmark ability to drop the action into slow-motion for fleeting moments of time is still fundamental to the game’s third-person gunplay, and he still relies on found painkillers to manage his health--a grim fact he’ll regularly make glib reference to--but both have been tweaked in significant ways.

There’s no on-screen indication other than the silhouetted life meter in the corner of the screen to let you know when Max is near death--a point that feels oddly archaic--though should you take one too many bullets, you can cheat that last gasp by targeting the enemy that got you, provided you’re holding onto at least one painkiller. Max’s basic shoot-dodging abilities remain intact, though now when you clear a room of enemies, you’re given the opportunity to continue pumping the last man standing full of lead for no apparent reasons beyond gory style and a vicious vindictiveness. The experience is also punctuated throughout with orchestrated slow-mo gameplay set-pieces that usually involve Max leaping through the air while killing as many men as possible.

In bringing the action of Max Payne into 2012, the addition of a cover mechanic is perhaps both the most subtle and significant change in Max Payne 3. Being able to slide into cover to control the tempo of the action is almost a given in a post-Gears-of-War third-person shooter. Combining that with Max’s literal ability to control the tempo by slowing down time might make him seem invincible. Instead, Max is made more fragile to make up the difference, a choice that makes it more challenging to use the slow-mo in a cool, stylish way and undercuts one of the fundamental things that has defined Max Payne in the past. Aside from the addition of some hard- and soft-lock targeting options, the actual gunplay doesn't feel too radically different, and yet for all of the chaos around you, it's an experience that feels much more controlled.

As in GTAIV and Red Dead Redemption, Max Payne 3 features a competitive multiplayer mode that runs parallel to the single-player; it takes place in the same world, with familiar locations and players, but it’s a very different experience. You can trigger the slow-motion effect in multiplayer, and though it’s in more limited quantities than in the single-player, it has the added impact of affecting everyone in the game. Beyond that ability, though, there are few surprises to be had in the multiplayer. There are deathmatch and team deathmatch variants, as well as an objective-based Gang War mode, and you’ll earn money and experience that you can use to unlock new weapons, gear, and abilities. Adding to the persistent side of the multiplayer, you can choose to join a crew, which can provide additional bonuses. It’s all pretty well thought-out as far as these types of modes go, but it feels kind of common, watering down the elements that make Max Payne cool.

Rockstar has taken a lot of risks in the ways it has reshaped the series with Max Payne 3, and there’s something to be said for opting out of the easy route. The aesthetic overhaul is certainly the most noticeable, though there's no understating the impact that certain gameplay modernizations have had on the experience. While fans might have a hard time processing the dramatic change in tone, it’s approached with a seriousness and conviction that I respect, and frankly, have come to expect from Rockstar. 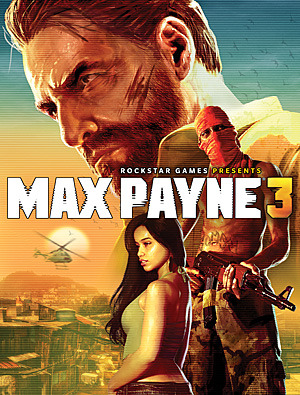