by Jeff Gerstmann on October 29, 2008
Share:TwitterFacebookReddit

This poor clone of today's music games is especially sad when you consider Konami's rich history with the genre.

You can trace the modern era of the rhythm game back to RedOctane and Harmonix. The hardware guys and the software guys, respectively, teamed up to create Guitar Hero, the game that brought us into this new era. Now that they're both split onto opposite sides of the Guitar Hero/Rock Band divide, it's easy to forget that they used to be bros. That makes it even easier to forget that they essentially created Guitar Hero by building a better, Western version of Guitar Freaks, Konami's guitar game that predates this current rush of plastic instrument madness by years--but only made it to home consoles in Japan. So it's a little sad to see Konami's current music game release, Rock Revolution. Sure, they're the original masters of the form, but this new release looks like it was cranked out by some new jacks who didn't know any better.
If Rock Revolution was released in 2004 or 2005, it would have been revelatory. But by today's standards, it's way behind the curve. This is a three-player rhythm game that lets two players play guitar and bass while a third can play drums. The game is played in the now-typical rhythm game format, so you're rated on what sort of combo of properly hit notes you can string together as you play through the songs. Unlike the competition, Rock Revolution sticks to the flat, 2D presentation of the notes you need to hit, much like you'd find in the company's Dance Dance Revolution or other Bemani games. This looks kind of cheap, and also seems worse from a gameplay perspective, as you'll need to view the entire length of the screen to see what's coming up. A 3D "highway" where the notes come at you give you more information in less space.
There are over 40 songs in Rock Revolution, and they're all covers. The game doesn't even acknowledge the original artists, instead just using a list of song titles on the back of the box and in-game. So if you're trying to figure out who originally performed "Sk8er Boi," the game doesn't make Avril Lavigne's name easy to find. Also, the quality of the covers in the game is almost universally awful, making the game sound like a deceptive Walmart compilation.
The game attempts to carve out its own niche by offering different challenges in the game's career, such as one that places "poison" notes on the tracks. If you play too many of the bad notes, you'll automatically lose. Another speeds up the note track as your multiplier increases. Another mode has you play a portion of a song twice, then asks you to play that same portion without it telling you which notes you need to hit. Overall, I found all of these additions to be incredibly annoying. You can skip a bunch of them and still proceed through the career.
There's also an online mode, which I've tried a couple of times now, but haven't run into anyone else playing it. The online modes are one-on-one versus, co-op, and band battle, which allows two groups to go at it. A studio mode lets you use the instruments to lay down your own tracks, though it doesn't seem like you can actually go back into the game and play these tracks, only listen to what you've recorded and add effects.
The game doesn't have its own guitars, leaving you free to use a compatible product. On the 360, we tested it out with Rock Band 2 and Guitar Hero World Tour guitars with no issues. The game will have its own drum controller coming out in November, but a menu option lets you switch between the Rock Revolution drums and a standard five-trigger setup that's compatible with Rock Band kits.
The Rock Revolution drums feel overly complicated. They have six pads up top along with a kick pedal. The six pads feel like they were almost randomly slapped onto the rectangular box that houses the kit. While it might have more pads than the other kits, the positioning doesn't feel right. Some elevation between the different pads might have helped them make more sense when using them. Also, it's probably worth noting that bolts need to be hand-screwed into the frame to build these drums, which makes it harder to change heights for different players and gives you a small bag of parts that you'll have to store when it comes time to stash these in your closet.
I kept looking for something in Rock Revolution that would redeem it and justify its existence. It's $10 cheaper than the average 360 and PlayStation 3 release. But $50 is still probably $30 too much for a game that comes off as a low-budget title. If you're playing loud enough, the noise from your plastic instruments will drown out the poor quality of many of the game's covers? No, that doesn't really play, either. Instead of trying to wrap my mind around this troubling cash grab, I'm going to move on and do my best to forget about Rock Revolution. I recommend you do the same.
Jeff Gerstmann on Google+
Load Comments 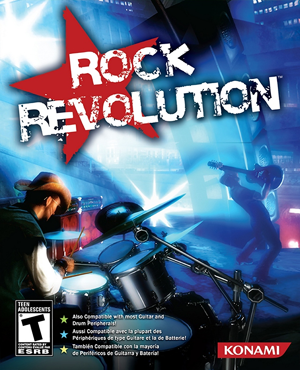