Bungie's Luke Smith speaks on his favorite gaming experiences of the year--even the ones he didn't put as much time into as he'd have liked.

Luke Smith is a Creative Director at Bungie. His most recent project, Destiny: The Taken King released in September 2015. He’s currently working on some real down-the-road stuff. Prior to joining the company in 2007, he did podcasts and news reporting at 1UP.com. He’s @thislukesmith on Twitter.

For obvious reasons, the game I thought about and played the most this year is Destiny: The Taken King. I’m not going to put it on my list (seems like a d-bag move, but it’s the tenth game I would’ve written about, and I would’ve told the story about how it was my friend and I who carried Brad to his Black Spindle and I would’ve talked about how we only had one Exotic sword [my friend’s], and one Bubble Shield [his] and a Melting Point Titan [mine] and how we finished the whole thing with four minutes remaining, it would’ve been an incredible story, but it's lost forever to the dark corners of time).

Once we got TTK out the door and the Live team took the reins, I had enough free time (minus my weekly Destiny rituals) to check out other games and get back to gaming as a hobby. It’s been a long time, videogames.

There are a lot of games I haven’t got to play or play enough of, so I’m splitting my list into two groups. The first list can serve as my Internet reminder of “shit I need to do” on the holiday break (I should add television shows to this list) and the second is the best (read: my favorite) of what I played this year.

Most of what I enjoy about games--and what they can uniquely deliver that other forms of entertainment really can’t--is playing with others. Experiences (co-op or competitive) that drive player interactions are something video games can provide that books or movie or TV (Note to Self: Watch Jessica Jones over the break) can’t.

It takes a lot of effort for me to pick up and enjoy something like a single player RPG or single-player action game – but there were a couple of those nonetheless that stood out to me this year.

For full-disclosure I’m mentioning where I am at in each of these games (Spoiler: It’s usually early on).

Ori and the Blind Forest

I don’t care for Metroidvania games. There are a few outliers I’ve enjoyed, but they are not my thing. That said, Ori’s art direction, character design, and gameplay feel are strong draws and the game deserves way more time than I’ve given it.

Here’s Where I Am: I’m old and I’m at the much-discussed water platform run-for-your-life section. I wish I had the reflexes today I had when I wore a younger man’s clothes.

I was excited to have a reason to plug my Wii U back in. I was dreaming of the 2D Mario game I’ve always wanted to play about the greatest Mario costume of all time--The Tanooki Suit. And I was dreaming about how I’d build the statue puzzles + flight into the stages and string the levels together in a campaign that people can download.

And this game doesn’t do any of that.

Here’s Where I Am: Waiting for Super Mario Maker 2 and watching Patrick Klepek be simultaneously horrified and challenged by people’s creations.

Here’s Where I Am: It’s waiting on the Steam Store for me to buy it.

The starting area blew me away with the questing layout and world-building. CD Projekt Red layered a bunch of awesome stuff into their tutorial environment and it all fit together, had me anticipating the inevitable showdown with the Royal Griffin and then ejected me out into the larger world after a long (and welcome) stop in Loreland. The Witcher 3 is not my kind of game, but I kind of am getting real into it.

Here’s Where I Am: Looking for some old crones in a candy swamp where bad shit happens to children--and yes, I’ve done a bunch of the Bloody Baron line.

I look forward to the day when some enterprising journalist digs up the real story on what went down between Kojima, Konami and what could’ve been (and what is) with Metal Gear V.

It’s by far the best-playing game directed by Hideo Kojima. The combat sandbox is great, the fantasy of “there’s a base that has some problems for you to solve and you can solve it in a variety of ways, here have some tools” is incredible.

But in the next breath, it’s kind of a crappy Metal Gear game (in the spirit of what all of the previous games have been). I wanted more narrative, more cutscenes, more cool bosses and villains, less base building extracurricular chicanery.

Basically, I wanted Metal Gear Solid 3 with this engine.

I don’t have anything to say about Her Story beyond the following:

It’s a brief journey that you need to go on.

We didn’t play this for long, but laughs per minute Helldivers delivered made it one of the games I’ll remember from this year.

Topdown-sorta-twin-stick Starship Troopers (with even less competent Rico’s Roughnecks) with just a whiff of Chromehounds global campaign (god, I really miss parts of Chromehounds) and comedic repercussions from friendly fire led to a bunch of hilarious .gifs and beverage-spitting laughter. The GIFs still show up from time to time on our #slack board.

I don’t play Madden Ultimate Team. I don’t play against randoms online. I play the weirdest and best version of the Madden games, and I play them every year.

See, for longer than I’m going to admit, roughly the same 20 people, plus an ever-changing cast of new potential members have been playing in an online Madden league together. Even before EA supported online leagues, we played. Back then we had to enter stats manually to web sites and the web site would track the league for us.

We have an incredibly steady group of core members, owners like Frenchie, DM, CB and myself have used the same teams for as long as we’ve played in the league, other rivals like AT and Wellie have played battles each installment to contest for their favorite team (the only time Eli Manning has been fought over).

While the quality of the Madden games fluctuates--bad years mean the league is short, good years mean it usually lasts until Spring or Early Summer of the following year--what I keep coming back to with Madden is our community, a small group of people playing games together.

I love Hearthstone. I want to spend the time to actually get good at this game (my reflexes continue to fade, but the fantasy is that my mind is still sharp!). Hearthstone feels like it has the potential to mirror the period of my life where I played almost 1500 hours of Dota 2, played it exclusively every night with my fam and it was my number one game for multiple years (Note: Dota 2 still is my favorite competitive multiplayer game of all-time).

But, I love getting my card backs, I love playing the Adventures (and I have a meaty backlog of adventures/challenges to bang out) and I love that Hearthstone is a game (like Dota 2) that makes me want to get better at it.

And that, Brad, is how you squeeze another year of near GOTY for Dota 2. 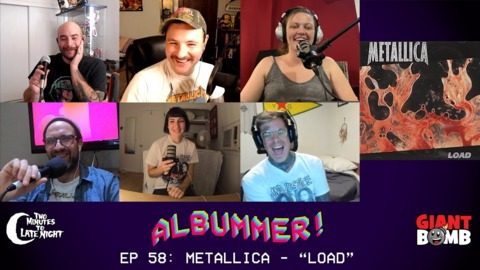 Today on Albummer! we're talking about Metallica's first post black album release and arguably the beginning of their decent into madness. This is our first episode of Monthtallica and we're joined by comedian and human inkblot Shayne Smith!

CD Projekt RED's third Witcher combines the series' non-linear storytelling with a sprawling open world that concludes the saga of Geralt of Rivia.