New-ish dad and Game of Thrones enthusiast Rich Gallup puts down his baby and his Facebook sword long enough to remember ten games he played in 2013.

Rich Gallup is Executive Producer for Disruptor Beam, currently working on Game of Thrones Ascent. Recently, he launched the Dad Strength podcast with Ben Coello, helping new dads figure out how to best spend their limited free time alongside ill-informed parenting advice. You'll find Rich talking about dad stuff and Game of Thrones and sometimes the Red Sox on his Twitter page.

In 2013 I scored a Dad Hat Trick. The birth of my son Calvin, the purchase of our first house, and a new job as Executive Producer at Disruptor Beam forced me to finally accept that I will no longer be able to play every video game that catches my eye, let alone finish them. My free time has never been more precious, leading me to heavily value enjoyable moment-to-moment gameplay experiences, which I believe the following list will reflect!

When I need a puzzle game diversion on my phone Paint it Back by Casual Labs has been it. Featuring 2D picross with smooth controls, a sense of humor displayed through puzzles like “Secret Agent Crab Zip-lining to Safety” and “The Resultant Vocalization of Uncontainable Inner Turbulence,” and a loose story of art theft, it’s like I’m Thomas Crown living in the Isabella Stewart Gardner museum!

I almost put Ridiculous Fishing in this space for its art, quirkiness and mastery of the iPhone’s tilt controls, but even though I fished every fish and unlocked every item, it didn’t get its hooks into me the same way as Juicy Beast Studio’s Knightmare Tower. It’s just like Ridiculous Fishing, but you’re a knight flying upwards instead of a fishing lure sinking downwards, and there’s more swords and stabbing. I felt like I could play it forever. One day, in a moment of clarity, I deleted this game from my phone and erased its name from my memory. Until now…

I want to read a 700-page book written in the tone and world of the text-only side missions found in Kentucky Route Zero. They are haunting and distinct with a breadth of cohesive weirdness.

My love of GTA V has nothing to do with its characters or story (both of which feel outdated) and everything to do with its impressive environment technology. What an amazing, seamless world! Also, bonus points for being the first GTA game where it’s fun to drive a car. Next request to address, legible UI! And story missions that don’t ask you to precisely land an object in a tiny spot while flying an unwieldy helicopter!

Last year I made a horrible mistake in my list of Games of the Year by leaving out Frog Fractions. Today, I’m making amends to the Doofy Web Gods. I can never seem to make time for lengthy computer gaming sessions, but I will quickly eat up any short, simple, and yes, doofy web games. Holy Wow Studios' Icarus Proudbottom is my favorite such game of 2013, combining typing tutorials with a fun, humorous story, plus an extra challenging trial mode that allowed my sister and I to rekindle our old typing wars!

Not the best Saints Row game, but the best game to pay tribute to They Live, ever. Saints Row IV executes on a lot of great things that other open world games could learn from, including a strong, diverse cast of characters, fun variety in missions and weapons, and the inclusion of a map that shows the location of all hidden collectibles. Cannot stress that last one enough! This was the only game of 2013 I was driven to reach 100% completion on, and the OCD side of my gaming habits appreciated the help.

I just picked up a Vita and fully planned to have fill my days with marathon Lumines sessions, fall in love with Tearaway, and bolster my ego through endless personality quizzes in Doki Doki Universe. Instead I have become obsessed with completing Guacamelee!, the first “metroidvania” style game to ever grab ahold of me. I blame the game’s style as I love the art and music. The jumping puzzles are nicely tuned to match the controls so I feel suitably challenged by a tricky spot, not frustrated to the point of quitting.

3. Brothers: A Tale of Two Sons

Brothers is the perfect game for anyone with limited gaming time, as there is practically no fat to it. As I played through this relatively short, tightly-assembled game, I pictured the team behind it was saying “Here, have a type of puzzle to solve! Done with that type of puzzle? We are too! Onwards to something new!” This position doesn’t really exist in a game studio, but Brothers felt like it had gone through an editor, who neatly trimmed away everything that wasn’t needed to deliver a nicely told story in a gorgeous, distinct world. That said, as a right-handed older brother I did not appreciate that the younger brother was controlled by the right analog stick. I called dibs!

2013: Year of the Web Games That Let You Click Away from Them for a Couple Hours and Come Back to Find a Lot of Sugar-Based Resources to Spend On Upgrades to Get More Sugar-Based Resources. I feel the late surge by Cookie Clicker overshadowed Aniwey’s Candy Box, the game that introduced us to whatever this genre should be called. Ignorable Sugar Management Games? Candy Box’s gameplay and depth unfolds in a surprising, rewarding manner, and if you haven’t experience it yet, you should!

Acquiring a Vita was a loud, personal reminder that the majority of my portable gaming experiences should come on a dedicated device, as most games I want to play greatly benefit from the expanded control scheme and immediate response provided by buttons. That said, Simogo’s Device 6 is the strongest statement I have seen that dedicated phone gaming could really shine, proving that a team can design a game that perfectly fits the controls and style of the iPhone. Device 6 is a cool, sleek puzzle game with a distinct, mysterious style that I could not imagine playing on any other medium. It simply wouldn’t have the same impact on a television or laptop. I have always considered my iPhone as the “busy games” device, while the “real games” waited to be played on their various boxes at home. Device 6 showed me that game makers may finally be figuring this phone thing out as a gaming medium rather as opposed to a monetizable distribution platform, and that makes it my Game of the Year. 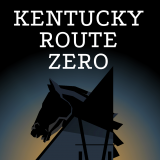 An indie adventure game about a secret highway in the caves beneath Kentucky. It was nominated for the Seumas McNally Grand Prize in the 2013 IGF awards.