Not much new here, but still a whole lot of fun.

THE BAD: Not much new with this New Super Mario Bros.

It's about darn time we got a new 2D Mario game. How long has it been? 12 years? I'm not sure. But that is a long time. But it's the 20th anniversary of the original Super Mario Bros, and as an anniversary present, Nintendo created New Super Mario Bros, a brand NEW Mario game. We should be excited for this. And we sure are. It's not as good or revolutionary, in fact it doesn't add anything new at all, but this game is a quality title.

The premise of the game is simple, short and to the point. Mario was taking Peach for a walk, Baby Bowser taps Mario on the neck, Mario looks back, Baby Bowser nabs Peach and runs away, and Mario is left there wondering what just happened. It's comically simple how something like this would end up into a huge chase over 8 worlds. And that's about it. You just got to love how Nintendo sets up their Mario games. 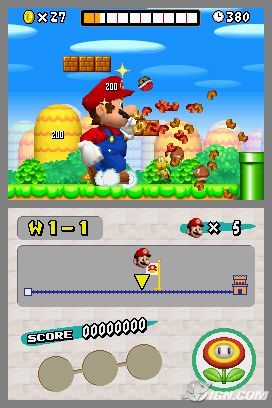 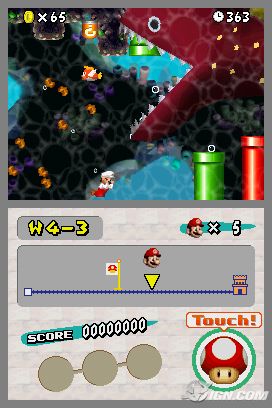 Mario is now 20 years old! And he is off in another wild adventure!

Mario and Luigi control about the same as they did in the NES original, but they also borrowed some moves from their 3D adventures. Mario can now butt stomp, spin attack, and wall kick. They add a bit to the level design, requiring obstacles that could not be passed in past 2D Mario games. They are still controlled with both the A and B buttons, with B to run and A to jump. You can switch them around if you like to choose which one works best for you.

The graphics have been altered a bit as well. Mario, Luigi, Peach, Bowser and most enemies are now in full polygonal 3D. Doesn't do much for gameplay, but it improves a lot for the visuals, as 3D characters animate much smoother and are more flexible.There is also great attention to detail. The enemies are usually there to get you, but when a certain notes for the music play, the characters do a dance move! It's very impressive how the little things stand out. 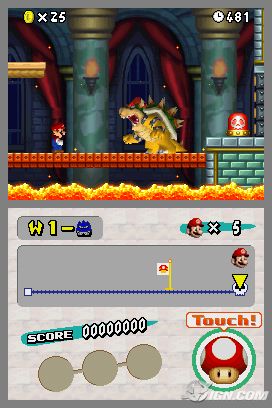 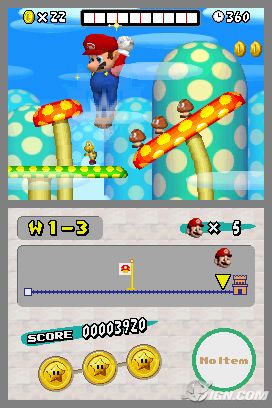 The graphics and animations are very nice.

The music of course is also great. Just like the title says, there is also new music composed just for this game, and it's very well. It successfully manages to capture the happy feel and joy of jumping and running on the game, It's catchy as well. The sound effects are recycled however. It's not a bad thing, but we should be encouraging new sounds after 10 years.

Do I have all but praise for this game? Almost......but not quite. No game is perfect. But the Mario games have done close to that. Does this game live up? If you were expecting Super Mario Bros. 4, then you will be disappointed. New Super Mario Bros is like a sequel to the original Super Mario Bros., but not a sequel to the later Mario games like 3 and World. Then again, Nintendo did this on purpurse, but it would be nice to have a new Mario game that builds upon Super Mario World, instead of take a step back and take a different road. Some will say the game is easy as well, but that's not that big of a complaint.

In all, New Super Mario Bros is more an anniversary present than a true next installment. Purist will absolutely love the classic gameplay and the new twist, but not because it's new. It's because it's old and doesn't mess with true gameplay. Like it or not, this an Old Super Mario Bros, and that shouldn't be a bad thing at all.

In what could be described as a re-imagining of the original 8-bit sensation, Nintendo returns to its roots with a traditional 2D side-scrolling Mario game.  It has all the hallmarks of Mario’s first adventure in the Mushroom Kingdom, but ditches the frustrations with a more modern approach.  It’s an ode to the oldschool game play that made the Italian plumber famous, but a game that can be beaten in a single sitting will leave many fans feeling a little short-changed. Presentation Alth...

Fun while it lasts, but it's wasted potential. 0

NOTE: This review was written by me years ago, but it's never been posted on GB, so enjoy!***************New Super Mario Bros. marks the return of Mario in a brand-new sidescroller, which is reminiscent of classic games such as Super Mario Bros. 1, 3, and Super Mario World. In fact, NSMB is basically a hybrid of the three games, with plenty of evidence to support that fact. NSMB adds its own quirks to the time-tested Mario formula, and while it’s not completely successful, it’s a fun ride while ...